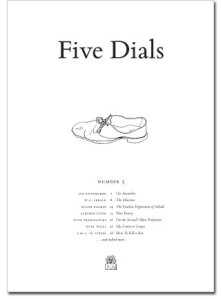 The new issue of Five Dials is very much an issue devoted to W.G. Sebald.  Nearly half of the 32 pages are related to him in one way or another. The issue opens with a “Letter from the Editor” (Craig Taylor) entitled On Translation and Sebald.  This is followed by A Little Trick of the Mind, in which four translators ( including Sebald’s primary English translator Anthea Bell) discuss “the world’s second oldest profession.”  (Bell’s father edited The Times crossword puzzle, we learn.)  She talks about translating the Asterix books and Sebald, although most of what she says here about Sebald she has said elsewhere.

Joe Dunthorne, a writer and, perhaps more importantly, a striker for the England Writers’ Football Team, writes about reading Austerlitz and what it meant to him as he moved to London.

But the gold mine is The Collected ‘Maxims.’ Robert MacGill and David Lambert were students in Sebald’s last fiction workshop, held in 2001.  They’ve combined many of the notes they made about what Sebald said in class.

Physicists now say there is no such thing as time; everything co-exists.  Chronology is entirely artificial and essentially determined by emotion.  Contiguity suggests layers of things, the past and present somehow coalescing or co-existing.

I can only encourage you to steal as much as you can.  No one will ever notice.  You should keep a notebook of tidbits, but don’t write down the attributions, and then after a couple of years you can come back to the notebook and treat the stuff as your own without guilt.

Lots of things resolve themselves just by being in the drawer a while.

Simon Prosser (publishing director for Hamish Hamilton) provides An A to Z of W.G. Sebald, an alphabetical soup of reminiscences grouped under subheadings  such as Bavaria, Climate, Kant, Lac de Bienne (the one place Sebald felt truly at home), Smoking, and Zembla.

And lastly there is a short piece by the late author Roger Deakin.

Best of all, Five Dials is on online magazine published Hamish Hamilton, W.G. Sebald’s British publisher.  It is a .pdf file for Adobe Acrobat Reader.