I now own a mildly mysterious copy of W.G. Sebald’s Vertigo as published by New Directions.  An alert reader of this blog noted that elsewhere I had written: “Curiously, Vertigo is the only one of Sebald’s major books for which I have never seen a British or American proof or advanced readers copy offered for sale. I wonder if one even exists.”   He saw just such a title advertised for sale and let me know so that I was able to buy it for my collection.

New Directions published the first American edition of Vertigo sometime in 2000 (the New York Times reviewed it June 11, 2000).  More than a year later, when they finally decided to release a soft cover edition, New Directions seems to have sent out an unknown number of advance promotional copies to promote the forthcoming soft cover version – using copies of the hard cover edition.  They simply took a jacket-less hard cover copy, slapped a small image of the book’s cover and two pre-printed stickers on the front cover, and then stapled a single page from their October newsletter into the front endpaper.  Unfortunately, it probably isn’t possible to know if this copy is from the first or second New Directions printing, because New Directions places information about subsequent printings of hard cover editions on the dust jacket – not in the book itself as most publishers do.  Note that the upper sticker misspells the name of the British publisher Harvill.

The mini-book cover for Vertigo that is pasted onto the promotional copy above presents another – admittedly minor – puzzle.  Semadar Megged’s front cover designs for the hard cover and soft cover editions of Vertigo (shown below) are essentially the same with only minor changes to adjust for the smaller cover area of about three quarters of an inch in both directions.  Although it is closer to the dust jacket of the hard cover edition since it does not reproduce the blurb by Richard Eder that appears in the final design of the soft cover edition, the cover shown above differs from the final designs of both hard cover and soft cover.   If you look closely you will see that the relationship between the text and the photograph of the volcano does not match the final designs and we see a second peak to the left of the spewing volcano. 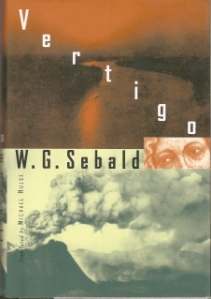