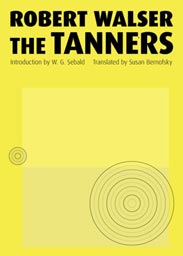 “Walser has been my constant companion.”

Some artists obfuscate when it comes to talking about those who influenced them, while others readily identify their own artistic forerunners for us.  When W.G. Sebald reflected back on Robert Walser’s writings in an essay first published in 1998, he also traced a deliberate path connecting his own writing with Walser’s.  The essay, Le Promeneur Solitaire, which recently appeared in English in the guise of an Introduction to the new translation of Walser’s novel The Tanners (New Directions, 2009), is every bit as revelatory about Sebald as it is about Walser.

Originally published in his book of essays Logis in Einem Landhaus,  Le Promeneur Solitaire begins with photographs of Walser – specifically seven portraits that span Walser’s lifetime, plus a series of snapshots of Walser posing during his infamous hikes.  Every time he looks at those photographs, Sebald writes, “I think I see my grandfather before me,”  and he reproduces two unidentified snapshots that seemingly show himself as a young boy hiking with his grandfather (the two photographs at the top of the right hand page below).  After enumerating several similarities between the lives of Walser and his grandfather, Sebald asks:

What is the significance of these similarities, overlaps, coincidences?  Are they rebuses of memory, delusions of the self and the senses, or rather the schemes and symptoms of an order underlying the chaos of human relationships, and applying equally to the living and the dead, which is beyond our comprehension?

There is scarcely a better description of the pattern behind Sebald’s own prose than this.

Sebald identifies so closely with Walser that he “has the persistent feeling of being beckoned to from the other side.”  So, when he writes about Walser, it can be instructive on occasion to simply substitute Sebald’s name for Walser’s.

[Sebald] hoped, through writing, to be able to escape the shadows which lay over his life from the beginning…transforming them on the page from something very dense to something almost weightless.  His ideal was to overcome gravity.

[Sebald was the] clairvoyant of the small.

Sebald pays much attention to Walser’s fragile state of mind, his remoteness from other people and from the momentous events of his own time, his utter lack of possessions, his lonely hikes, his eventual institutionalization.  “He was the most unattached of all solitary poets.”   He sees the handful of portraits of Walser as “stations in a life which hint at the silent catastrophe which has taken place between each.”  Sebald turns all of this into something resembling a state of grace.  “On the subject of the collective catastrophes of his day he remained resolutely silent.  However, he was anything but politically naive.”  For Sebald, Walser’s “purity” becomes the source for what he sees as Walser’s “aesthetic and moral assurance.”

Le Promeneur Solitaire is surely one of Sebald’s most personal essays about literature and it is wonderful to have it translated into English at last.