A Book Interrupted by Love

Not long ago I wrote about Andre Breton’s 1928 novel Nadja, which includes embedded photographs.  In 1937, Breton wrote another photographically-illustrated novel called L’Amour Fou, or Mad Love.  Oddly, it took half a century for an English translation to appear from the University of Nebraska Press (by Mary Ann Caws).  Mad Love begins as a meandering essay about love, lovers, beauty, crystals, symbols, and much more.  Breton’s agenda in these early pages is to redefine these terms within the context of Surrealism.  The greatest kind of beauty “would not come to us along ordinary logical paths,” but will come about “convulsively.”  He points to the pleasures of automatic writing: “what is delightful here is the dissimilarity itself which exists between the object wished for and the object found.”

“Convulsive beauty will be veiled-erotic, fixed-explosive, magic-circumstantial, or it will not be.”   And lest anyone try too hard to understand this kind of love or beauty, he warns that “interpretive delirium begins only when man, ill-prepared, is taken by a sudden fear in the forest of symbols.”

About a third of the way through the book, Breton explains what he is doing:

I had just some days earlier written the beginning text of this present book, a text which takes full account of the mental and emotional dispositions at that time: a need to reconcile the idea of unique love with its more or less sure denial in the present social framework, the need to prove that a solution, more than sufficient, indeed in excess of the vital problems, can always be expected when one deserts ordinary logical attitudes.

But at this moment, a woman appears who makes him desert “ordinary logical attitudes.”  She approaches him, probably in a cafe where he is writing.  It is a moment that a smitten Breton notes with unexpected precision.  “And I can certainly say that here, on the twenty-ninth of May 1934, this woman was scandalously beautiful.”

This young woman who just entered appeared to be swathed in mist – clothed in fire?  Everything seemed colorless and frozen next to this complexion imagined in perfect concord between rust and green…This color, taking on a deeper hue from her face to her hands, played on a fascinating tonal relation between the extraordinary pale sun of her hair like a bouquet of honeysuckle…

A few pages later, however, the unnamed woman disappears from the book for a long spell and Breton’s convoluted unfolding of Surrealism begins anew.  Mad Love concludes with an utterly remarkable letter addressed “Dear Hazel of Squirrelnut,” to be read in 1952 on the girl’s 16th birthday.  “Hazel” is the eight-month old daughter that resulted from this liaison.  On one level, Breton’s letter is a typical mix of fatherly advice, hyperbole about love and pain, and a wistfulness for a future he feels he’ll never witness.  But it is also a deeply moving document of Breton’s struggle.

I was thinking of all this, feverishly, in September 1936, alone with you in my famous unliveable house of rock salt.  I was thinking about it between reading newspapers telling, more or less hypocritically, the episodes of the Civil War in Spain, the newspapers behind which you thought I was disappearing just to play peek-a-boo with you.  And it was so true, because in such moments, the unconscious and the conscious, in you and in me, existed in complete duality near each other, keeping each other in total ignorance and yet communicating at will by a single all-powerful thread which was the exchanged glance between us.  To be sure, my life then hung only by the slightest thread.  Great was the temptation to go offer it to those who, without any possible error and any distinction of tendencies, wanted at any price to finish with the old “order” founded on the cult of that abject trinity: family, country, and religion.  And still you held me by that thread which is happiness, such as it pierces the web of unhappiness itself.  I loved in you all the little children of the Spanish militia, like those I had seen running naked in the outer district of Santa Cruz, on Tenerife.  May the sacrifice of so many human lives make of them one day happy beings!  And yet I did not feel in myself the courage to expose you with me to help that happen.

This section of the letter is followed by a cropped version showing the right half  of the now famous photograph by Henri Cartier-Bresson, Children in Seville, Spain, 1933, one of twenty photographs in Mad Love by artists such as Man Ray, Dora Maar, and Brassaï. 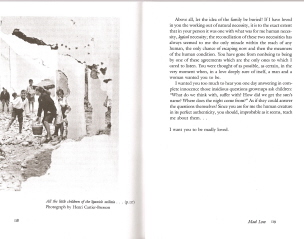 The unnamed woman in Mad Love is a fictionalized version of Breton’s second wife Jacqueline Lamba (1910-1993).  They had a daughter named Aube (Dawn).  Breton and Lamba divorced in 1943, and she later married the American artist David Hare.