In less than a decade, the work of W.G. Sebald has been the inspiration for a number of exhibitions in which curators and visual artists respond to his books.  So I was fascinated to find an ongoing series of exhibitions at the CCA Wattis Institute for Contemporary Arts (San Francisco) based on iconic American novels.  I was especially attracted by the catalog for their recent exhibition on Herman Melville’s Moby-Dick, which was designed by Jon Sueda.  (By the way, in case you recall my recent post regarding abridged books, in which I wrote about two shortened versions of Moby-Dick, it’s fun to note that the Wattis catalog contains a chapter called Moby-Dick in 1,000 Words, which is exactly what it says it is.)

Moby-Dick is the second show in a trilogy of Wattis Institute exhibitions that are based on canonical American novels. The first, The Wizard of Oz, was presented in fall 2008; the third will be Huckleberry Finn, in fall 2010. All three stories have major themes related to exploration and (self-)discovery, and the corresponding exhibitions function as metaphorical journeys through which the audience experiences various notions of America’s reality, both contemporary and historic. Established and emerging contemporary artists from around the world are invited to address the key themes of the books and the historical moments in which they were written. Many of the artists create new commissions specifically for the shows. 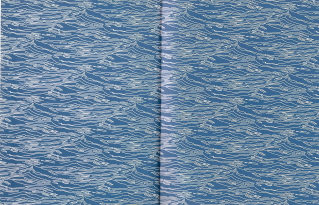