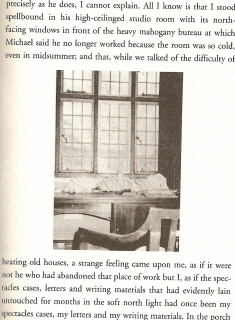 Michael Hamburger’s desk, as shown in The Rings of Saturn.

A little while ago (well, March, to be exact), the poet Will Stone put up on his website an essay he had written in 2007 upon the death of his friend and fellow poet Michael Hamburger.  Unpicked Apples – Memories of Michael Hamburger is a moving and admiring remembrance of Hamburger and a tribute to one of the last survivors of that “‘civilised’ generation of, for want of a better expression we might call ‘men of letters’.”  Hamburger was the translator of two of W.G. Sebald’s books of poetry – After Nature and Unrecounted – and he appears as a character early on in Sebald’s book The Rings of Saturn.

Embedded within Stone’s memories of Hamburger are his recollections of Sebald’s sudden death in 2001 and some moments Stone and Hamburger shared as they tried to come to terms with that tragic accident.

I also remember an exchange following his attendance at Max [Sebald]’s funeral in Norfolk in which Michael sought to express the severity of the sudden loss of Max, to articulate the onerous sense of vacancy left by his passing, which was that much more than the premature loss of a well-loved creative man in late middle age. I always had the feeling from his often guarded reverence for Max that Michael realised astutely the true reach and sacrifice of Sebald’s vision, not only the writings that had made him an icon in the Anglophone world, but the painstaking assemblage of an entire work through long gestation, the vital consequence of his uncompromising labour of literary absorption…