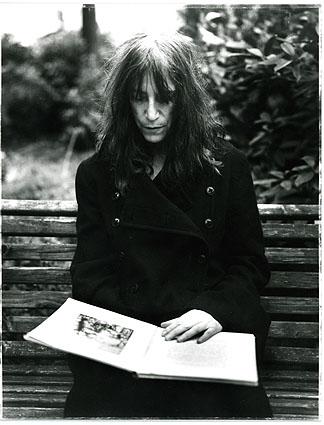 It’s now a few days after the Sebald event at Snape Maltings and I’m not finding much coverage online.  The Guardian hyped the Patti Smith concert and the Grant Gee film for days but doesn’t seem to have reviewed either one yet.  A couple of online writers have added their musings.  Check out Invective Against Swans Tumblr commentary and Skywritings blog post.

In case anyone was wondering about the connection between Patti Smith and Sebald, apparently she gave out a list of her favorite books at the Melbourne International Arts Festival a few years ago. It’s an interesting blend of cult books (e.g. The Glass Bead Game), the expected Beat classics, Beat must-reads (Rimbaud, Blake, et al), more than a handful of genuinely great books, and two I’ve never heard of before. Several authors rate high enough that Smith recommends all their books, including Sebald.

“The Master & Margarita” by Mikhail Bulgakov
“Journey To The East” by Hermann Hesse
“The Glass Bead Game” by Hermann Hesse
“Heart Of Darkness” by Joseph Conrad
“Moby Dick” by Herman Melville
“Billy Budd” by Herman Melville
“Songs Of Innocence” by William Blake
“The Wild Boys” by William Burroughs
“Howl” by Allen Ginsburg
“A Season In Hell” by Arthur Rimbaud
“Illuminations” by Arthur Rimbaud
“Wittgenstein’s Poker” by David Edmonds & John Eidinow
“Villette” by Charlotte Bronte
“The Process” by Brion Gysin
“Cain’s Book” by Alexander Trocchi
“Coriolanus” by William Shakespeare
“The Happy Prince” by Oscar Wilde
“The Sheltering Sky” by Paul Bowles
“Against Interpretation” by Susan Sontag
“The Oblivian Seekers” by Isabelle Eberhardt
“Women Of Cairo” by Gerard de Nerval
“Under The Volcano” by Malcom Lowery
“Dead Souls” by Nikolai Gogol
“The Book Of Disquiet” by Fernando Pessoa
“Death Of Virgil” by Herman Broch
“Raise High The Roof Beams Carpenter/ Franny & Zooey” by J.D. Salinger
“The Scarlet Letter” by Nathaniel Hawthorne
“A Night Of Serious Drinking” by Rene Daumal
“Swann In Love” by Marcel Proust
“A Happy Death” by Albert Camus
“The First Man” by Albert Camus
“The Waves” by Virginia Woolf
“Big Sur” by Jack Kerouac
anything by H.P. Lovecraft
anything by W.G. Sebald
“The Thief’s Journal” or anything by Jean Genet
“The Arcades Project” or anything by Walter Benjamin
“A Poet In New York” by Garcia Lorca
“The Lost Honor Of Katharina Blum” by Heinrich Boll
“The Palm Wine Drinkard” by Amos Tutuola
“Ice” by Anna Kavan (or anything by her)
“The Divine Proportion” by H.E. Huntley
“Nadja” by Andre Breton

What’s next for Patti Smith?  Apparently a detective novel.