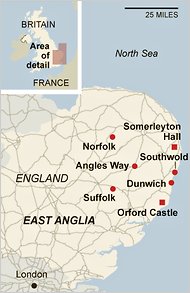 The New York Times has jumped on the bandwagon that, until now, has largely been driven by the Guardian.  The Times has sent writer Rachel B. Doyle to go Rambling With W. G. Sebald in East Anglia with a copy of The Rings of Saturn as her guidebook.  A version of Doyle’s article, which appeared on the Times website yesterday April 22, will also appear in the April 24 Travel section of the Sunday print edition.  Doyle rambled by bicycle through Southwold, Dunwich, and Orford, and her article provides links to the websites of some of the key places, such as Somerleyton Hall, Southwold Sailors’ Reading Room, Orford Ness, and The Crown, an inn where Sebald liked to stay in Southwold.

Doyle’s self-effacing account relies largely on Sebald to provide the backstory to the places she – and he – visited. In this way, Doyle’s piece avoids being a facile exercise in literary voyeurism.  Instead, she manages to remain true to Sebald’s vision, especially in regard to the powerful attraction that ruins of all types held for him.  Doyle neatly contrasts two such ruins, Somerleyton Hall and Orford Castle.

Somerleyton Hall, a railway magnate’s mansion that had its heyday in the 19th century, represents the essential hollowness of social ambitions – wealth, caste, power.

But it was the Hall’s archaic oddities and waning splendor, its stuffed polar bears and old croquet mallets that charmed him immensely. It must have been uninviting, Sebald wrote, “when everything, from the cellar to the attic, from the cutlery to the waterclosets, was brand new, matching in every detail, and in unremittingly good taste. And how fine a place the house seemed to me now that it was imperceptibly nearing the brink of dissolution and silent oblivion.” Sebald was drawn to East Anglia by these very anachronisms, by physical evidence of the passage of time and the steady drift toward irrelevance that belied its past importance.

Orford Castle and nearby Orford Ness, on the other hand, were long the home of England’s top secret weapons experiments.  To Sebald, the place resembled “a penal colony” and Doyle finds it “still a shock to see an obsolete nuclear bomb on the floor of the information center.”  The dreary and dilapidated ruins at Orford become reminders of the worst of our political and territorial ambitions.

As Doyle points out, one of the core themes of  The Rings of Saturn is “the steady drift toward irrelevance,” which, Sebald seemed to be saying, was the only fitting end for human ambition and folly.  At the same time, Sebald could take delight – however melancholy – in the “dissolution” of places like Somerleyton Hall, while Orford stood for a horror of a completely different order.

“If you look out from the cliff-top across the sea towards where the town must once have been, you can sense the immense power of emptiness,” Sebald wrote. “Perhaps it was for this reason that Dunwich became a place of pilgrimage for melancholy poets of the Victorian age.”

The Times also provides a slide show of related photographs by Andrew Testa.  Doyle is the author of another Times travel piece, Norwich, England – a Getaway for Book Lovers, which I briefly wrote about in January.