Text and Image in Autobiography

I’m continuing my traversal of the essays in the new book of The Future of Text and Image, edited by Ofra Amihay and Lauren Walsh (Cambridge Scholars Publishing) with the three essays in the section called Text and Image in Autobiography.  (My overview of the anthology can be read here.)

Molly Pulda’s “Portrait of a Secret: J.R. Ackerley and Alison Bechdel” deals with J.R. Ackerley’s photographically-illustrated autobiography My Father and Myself (1968) and Alison Bechdel’s well-received graphic memoir Fun Home (2006).  In both books, the authors discovered posthumously that their fathers had led secret lives as homosexuals.  And in both book,s photographs cause some of the epiphanies that each author stumbles upon.

Bechdel and Ackerley seek in their fathers’ portraits an essence of heredity, proof that something lives on in paternal absence.  Their process of mourning calls for an image, a visual representation of the father’s mortal secrets.  What is revealed in their photographic quest may not be a visual secret, but simply the process itself, the negation of familial revelation that is extended to the reader….The open wound of loss is manifest in Ackerley and Bechdel’s family secrets.  Rendering the father’s “erotic truth,” distilled through the author’s hand and eye, may not restore the father, but it can bond the author and reader in a sticky solution of secrets withheld and revealed.

Tanya K. Rodrigue’s “PostSecret as ImageText: The Reclamation of Traumatic Experiences and Identity” deals with the huge online confessional world of PostSecret, which seems to be spawning an academic mini-industry devoted to the endless stream of posted “confessions.”  PostSecret, of course, is unmoderated, and hence it is essentially impossible to verify the truth of any post.  Rodrigue is not concerned by the inability to know true confessions from fictional ones, nor is she concerned about selecting a single image out of a relentless stream of images as the basis for extended analysis.  She uses the image (below), upon which some text is written, to address the discourses of trauma, language, and identity surrounding the subject of rape.  I’ll just say that I was not convinced and I’ll let it go at that. 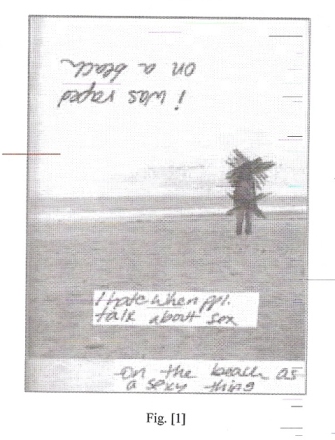 The essay by Dale Jacobs and Jay Dolmage, “Difficult Articulations: Comics Autobiography, Trauma, and Disability,” focuses on David Small’s autobiographical graphic book Stitches, a memoir of his disease and eventual disability.  Their essay revolves around the history of images of disability and deformity and how such images – especially those in Stitches – can be understood using the discipline of Disability Studies.

My other two posts dealing with essays from the book are here and here. 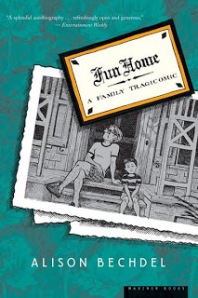