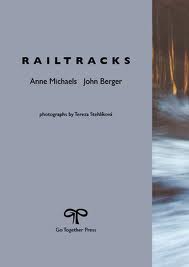 A. – We may be one of the last generations with memories run through by trains.

In my two posts called Railroad Conversations, I’m looking at two books of prose and photographs about railways that each began as site specific artworks before being transformed into books. In both cases, the creators of the performed artworks and/or the publishers opted not to produce a publication that would serve as traditional documentation for the performances, but instead chose to create new literary works that would stand on their own.  This might have something to do with the fact that the performances were created by people who are primarily writers: Lavinia Greenlaw in the case of Audio Obscura (discussed in part 1 of Railroad Conversations) and Anne Michaels and John Berger, discussed below.  In each of these books, it is also curious to note that the photography was not part of the original performances but was newly added, undoubtedly to give the book some sense of its origins in the performative world.

Railtracks, by Canadian writer Anne Michaels and English writer, critic, and artist John Berger, is structured as a number of conversations between A. and J., who seem to be lovers with a long shared history of traveling that includes references to Canada, the United States, and Britain.  As the title hints at, Railtracks refers to the rail system as a whole, almost as a kind of living, breathing, and now dying body of technology and memories that symbolizes the nineteenth and twentieth centuries.  In their brief conversations, which run from one to six pages apiece, A. and J. speak both of personal matters and of history, lacing their conversations with references to stations, tracks, freight trains, passenger cars, rail yards, timetables.  Even far away from the tracks themselves, one can still hear the ever present sound of trains and their whistles.  The railway symbolizes separation and return, exile, hope, despair, nostalgia, while railway stations have been places where people linger and dream, where men went off to war, and where lovers could meet in anonymity.

But it is the tracks themselves – with their paradoxical ability to represent parallel and converging lines at the same time – that serves as the key metaphor in these conversations.  Echoing this paradox, A. and J. speak of the intimacy possible across vast distances (thanks mostly to the telephone), and they reminisce about placing “trunk calls” through an operator from public telephone booths located in stations.  Love is enriched by separation, since separation implies the joy of reunion.  “Impossible now to think of train travel without a kind of tenderness – as if that is what love is: arrival after arrival,” A. says.

At times, the conversations turn highly allusive and start to resemble something very close to a poetry of suggestions.

A.  The noise of wagons gaining speed.
J.  The flight of starlings at dusk.
A.  The spitting sizzle of sausages being cooked.
J.  Political arguments.
A.  Sunday morning in bed.
J.  Pamphlets.
A.  Many different languages and hand signals.
J.  Scams of every kind.
A.  Friendships of every sort. 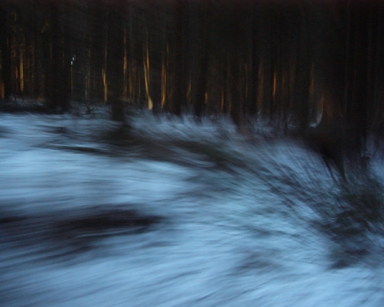 The conversations are separated by color photographs by Tereza Stehlíková, whose blurred images are of landscapes taken from inside moving trains.  In the book, the images are cropped with rounded corners suggesting the shape of train windows.  For me, her images evoke the cocooned separation one feels seated inside a train and watching the world whiz by, permitting one’s thoughts to turn inward. 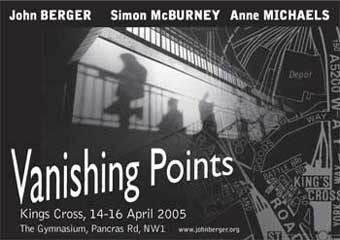 A small note tucked in the back of Railtracks explains that the book constitutes the “full pre-perfomance text” of Vanishing Points, which was a site-specific work directed by Simon McBurney of Complicite and produced for “Here Is Where We Meet,” a season of cultural events dedicated to John Berger in 2005.  Here is the blurb about Vanishing Points from the season website:

Vanishing Points is a unique site-specific collaboration between the writer and commentator John Berger, poet and novelist Anne Michaels and theatre-maker Simon McBurney.  Vanishing Points takes its audience from the industrial to the metaphysical, from the huge movements of globalisation to the interior pulses of memory, and from the present to a past that still exists in vibrant, essential traces.  Vanishing Points speaks of memories and hidden histories, of arrivals and departures, of love and disappointments, seeking with reflective urgency to bear witness to changes that affect us all.  Vanishing Points takes place in the evocative setting of the historic German Gymnasium, located in the capital city’s largest transport nexus, Kings Cross and providing a compelling backdrop to explore the event’s themes of immigration, deportation and conflict.

It’s pretty clear that Vanishing Points and Railtracks are radically different beasts.  The book’s intimate two-person dialogue is replaced in the performance by multiple voices (none of which resemble a dialogue) and layers of sounds and multilingual background texts, transforming it into a considerably more political and historical project.  Since texts that do not appear in Railtracks can be heard in Vanishing Points,  I would hazard a guess that the odd qualifier “full pre-performance text” might mean that Railtracks is meant to document the text as originally written by Michaels and Berger, not as performed by Complicite.

As I wrote this post I kept looking for a place to insert my favorite line from the book, attributed to A., but I never found the right context.  So here is the line all by itself.

A photograph of a ghost is sound.

Railtracks was published in London by Go Together Press and in the U.S. by Counterpoint in Berkeley in 2012. This post is based on the U.S. edition. 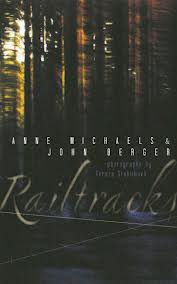 The cover of the U.S. edition of Railtracks, with photograph by Tereza Stehlíková.