Source Photographic Review has put up the latest in their series of short films on the theme of photography and literature.  In the first video, Mick Gidley (emeritus professor of American literature at the University of Leeds) talks about Wright Morris’ groundbreaking 1948 novel The Home Place, which had alternating pages of photographs and text.

Here is what Source says about the film.

Like the flying car, the photographically illustrated novel has always seemed like an idea on the cusp of realisation. Combining the reality of photographs and the fictionality of novels was surely inevitable. There were a number of forerunners to establishment of this new form (Bruges-la-Morte, Nadja) but The Home Place looked like being the perfect marriage of these two ways of representing the world. If anyone was going to make the photographically illustrated novel a success it was Wright Morris. He was unusual in being a skilled photographer as well as an accomplished writer. He had clearly thought hard about how photographs and text could co-exist in a work of fiction. More surprising still he had the backing of a mainstream publisher even though it was going to cost them more to reproduce photographs well. The critics liked it but for some reason The Home Place (and his previous novel The Inhabitants)  never quite captured the public’s imagination. Although it has remained in print it is not a widely known book. It may be that now – when there are more novels with photographs in them around – is the perfect time to reassess The Home Place. Or it may be that Wright Morris’s Modernist precision and dedication to the local and specific is too remote for us now. See what Mick Gidley has to say about the book and decide for yourself, the flying car, maybe its time has come?

In the second video, Carolin Duttlinger (lecturer in German, Wadham College) talks about the role that photographs played in the writing of Franz Kafka’s Amerika.

As Carolin Duttlinger explains, Kafka preferred photographs to films as a source of inspiration because of their potentially uncanny quality and the ease with which they could be studied in detail. The photographs that Kafka looked at become a kind of score for the book. Seen through Kafka’s eyes they attain new meaning, seen on their own they are a little lifeless. 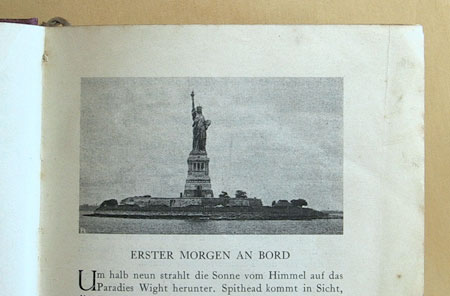