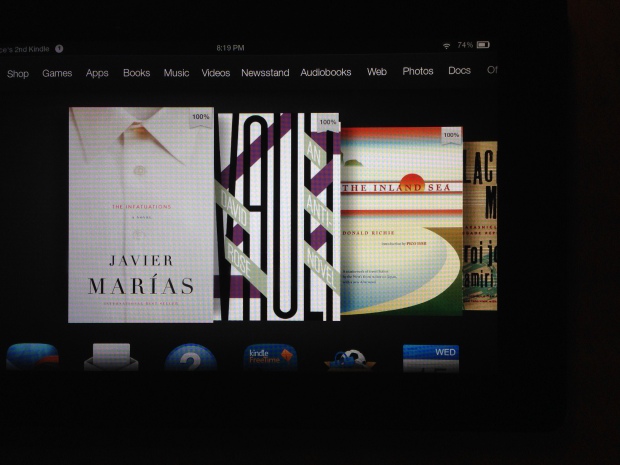 Three recent books from my Kindle.

1. Javier Marias. The Infatuations. Knopf, 2013. For the moment at least, The Infatuations is my favorite book by Javier Marias. While it doesn’t have the scope of the three-volume series Your Face Tomorrow, it benefits from an unwavering intensity of focus that is both exhilarating and harrowing at times. With five main characters and a noirish murder mystery plot, The Infatuations focuses in on the psychology of the characters and minutely examines the social and interpersonal dance of their interactions.

Maria, the narrator, analyses seemingly every sentence, every movement that the other characters make in her presence. And when there are gaps in her knowledge, she obsessively fills the gaps with speculations, with stories carefully crafted to fit the facts as she knows them. “When we get caught in the spider’s web – between the first chance event and the second – we fantasize endlessly.” There is a continual push-pull relationship between knowledge and uncertainty. Each of the characters hungers to have their questions answered, their fears resolved, their hypotheses confirmed.  And yet each feels equally sure that there is never a final, definitive truth. “Being certain of anything goes against our nature.” Maria works in a Madrid publishing house, which allows Marias to toss off some jibes at the unpleasantness of self-important writers and, at times, to perhaps have a bit of fun at his own expense.

He had a marked tendency to discourse and expound and digress, as I have noticed to be the case with many of the writers I meet at the publishing house, as if it weren’t enough for them to fill pages and pages with their thoughts and stories…

2. David Rose. Vault: An Anti-Novel. Salt Publishing, 2013. An aspiring professional cyclist, who spent the Second World War as a sniper, reads a fictionalized account of his life, retelling the story in his own words and correcting the novel’s errors chapter by chapter. (“Hasn’t he checked any of the history?”) While Vault is not really the anti-novel it sounds like it ought to be, there is a beautiful spareness to Rose’s writing in this short debut novella.

Surrender to the bias of the weight in my pocket? My God. Is that what my life has been reduced to? Amateurish purple?

Look, I don’t so much mind my life being borrowed. It’s what novelists do. They have to make a living. I understand that. And besides, I can correct it, put the record straight.

What I do mind is having my death stolen.

3. Donald Richie. The Inland Sea. Stone Bridge Press, 2002. When this was originally published in 1971, Donald Richie had already lived in Japan for more than two decades. Richie, who just died last year, was the consummate guide to the people and culture of Japan, and The Inland Sea deserves to be one of the great travel classics. He combined an impeccable insider’s knowledge with the awareness that he would always be an outsider. The reader quickly learns to trust the set of eyes through which we view Japan. As the book moves farther into the Inland Sea, Richie brings us deeply and intimately into his own interior. This edition includes a insightful new Introduction by Pico Iyer.