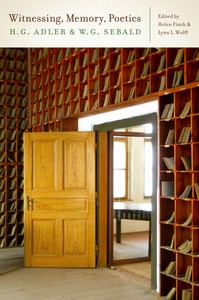 In the second section of the new book Witnessing, Memory, Poetics: H.G. Adler & W.G. Sebald, edited by Helen Finch and Lynn L. Wolff, we find essays by Katrin Kohl, Kirstin Gwyer, and Lynn L. Wolff grouped under the rubric “Witnessing Trauma and the Poetics of Witnessing.” The first essay is Katrin Kohl’s “Bearing Witness: The Poetics of H.G. Adler and W.G. Sebald.” Using as a touchstone Theodore Adorno’s now-infamous statement that “to write poetry after Aushwitz is barbaric,” Kohl examines how Adler and Sebald cope with the ethical issues of “bearing witness” through their poetry and fiction, focusing mostly on Adler’s novel Eine Reise (The Journey) and exclusively on Sebald’s Austerlitz. The principal contrast, of course, is that Adler was a survivor of the concentration camps while Sebald’s life was essentially untouched by the war or the concentration camps.

In an essay on poetics, which was apparently not published in Adler’s lifetime, Adler – who wrote both poetry and novels related to the Holocaust – directly countered Adorno’s dictum.  Adler declared that “the possibility of an artform cannot be decreed in theoretical terms.”

[Adler] thereby places literature written in the aftermath of the Shoah on a foundation that is independent of philosophical and ethical questions of legitimacy, and focused most immediately on poetic quality. He thus avoids pressing poetry into the service of bearing witness. However…he places the poet’s integrity and commitment at the center of poetic utterance…By freeing poetry from the obligation to respond to external constraints, he defends its potential as an independent counter-discourse that symbolizes the individual’s spiritual autonomy, and allows it to act freely as a force for humanity.

Sebald’s generation, Kohl asserts, was faced with the dilemma of being inundated with “mass statistics designed to induce guilt without emotional or moral understanding.” Sebald, therefore, had to “undertake the project of developing a poetics that responds to the sense of implication in events he perceived to be vital in terms of identity but which are at the same time not directly accessible” to those without firsthand experience of the Holocaust. His poetics, then, become the opposite of Adler’s. Sebald must “facilitate a process that can begin to construct a context in which past lives and actions gain meaning.” Kohl sees the gap between those who witnessed the Holocaust and those who did not as “unbridgeable,” essentially preventing someone like Sebald from “bearing witness” in a manner similar to the way in which Adler’s writing functions.

Sebald thereby evolves a narrative stance of empathetic respect based upon moral implications that rigorously refrains from appropriating any intellectual, moral, or emotional high ground, and above all dispels any notion of the person who was not there being able to act as witness.

Sebald, therefore, becomes a mediator, not a witness. “Where Adler writes sociological studies based on primary sources, and fictional works depicting characters who engage with immediate events, Sebald traces individual lives through the darkening mirror of history, giving them a voice that seeks to move beyond representation in the act of speaking.”

As if in answer to Kohl – and many others who have accorded Sebald a privileged, if not unique, literary place vis-à-vis the Holocaust, Kirstin Gwyer’s essay “‘Schmerzensspuren der Geschichte(n)’: Memory and Intertextuality in H.G. Adler and W.G Sebald,” debates the very legitimacy that Sebald sought for his position.  She deals directly with the tricky question of Sebald’s relationship to the Holocaust, focusing on two works: Austerlitz and a 1990 paper he wrote on “Jean Améry and Primo Levi.” Sebald was not of the generation that personally witnessed the Holocaust, yet in a variety of places and ways he suggested that he had both a special literary approach to the Holocaust (based on his understanding of  the theories of trauma and postmemory) and a personal connection to the Holocaust that seemed to transcend his lack of personal experience. “Even though he was too young to have any genuine firsthand memories of the war, he felt that he was the product of precisely the atrocities he did not experience.”

[In the 1990 essay] Sebald is unspecific about the nature of the horrors he did not experience, during a time of destruction he did not witness. Indeed, here as elsewhere, he is unspecific in a way that suggests he may be referring to more than the bombing of German cities that is, on the face of it, his topic….The never-experienced horrors are presented as having had a far more lasting impact on Sebald than his actual childhood did. The former, not the latter, were felt to have cast a shadow from which he could never emerge.

Gwyer, who I would describe as a gentle but rigorous skeptic, argues forcefully that Sebald “is effectively positioning himself as an elective heir to the victim collective and assuming the (literary) legacy of Holocaust trauma.”

Between its extensive use of intertextuality and its focus on the processes of, and possibilities inherent in, traumatic transmissions across victim-perpetrator or generational boundaries, Austerlitz appears as a text principally occupied with questions of legacy and legitimacy. As such, it…seems to be informed by a similar “wishful sense of belonging” on the part of Sebald – by a desire to be a “postmemorial” witness, invested enough to believe he can feel the pain of the past  and the pain of the victim, almost as if it were his own, but belated enough to feel better equipped to preserve of reproduce its traces in the present than a primary witness might be.

“In the final analysis,” Gwyer writes, “it is difficult to say where Austerlitz falls on a scale assessing the degree and legitimacy of Sebald’s (literary) identification with,and possible appropriation of, a history, or story, that is not his.”

In the last essay in this section, Lynn L. Wolff tries to “build upon the major intertextual and thematic connections that this volume establishes between Adler and Sebald to explore the degree of ‘wit(h)ness’ in their relationship.” She focuses on two texts: Adler’s 1970 essay “Der Autor zwischen Literatur und Politik” (The Author between Literature and Politics) and Sebald’s 2001 talk/essay  “Ein Versuch der Restitution” (An Attempt at Restitution), contrasting Adler’s philosophy of “engagement” with Sebald’s sense of “restitution.” Adler, a Holocaust survivor who refused to make any autobiographical statements in his sociological or literary texts about the Holocaust, was wary that  “the emotional content” could easily (and understandably) color any survivor’s story. As Wolff puts it, “for Adler, a certain distance is essential for both bearing witness to and scholarly representations of the Holocaust.” To some extent, it is this distance that Sebald tries to employ in his own “poetics of engagement” with Germany’s past. Sebald “strives toward a form of ‘true’ and authentic witnessing that is only possible from a distanced perspective.”

Sebald’s Austerlitz can be read as his direct attempt at restitution, by engaging with Adler’s monumental work Theresienstadt and by bringing attention to this significant yet nearly forgotten survivor and scholar of the Holocaust. Finally, Sebald’s careful approach us further underlined by the title of the lecture, “Ein Versuch der Restitution”: It is important to emphasize the tentativeness in Sebald’s claim, for it is in this attempt, I would argue, that we can locate both the political promise and the respectful distance inherent in his works.