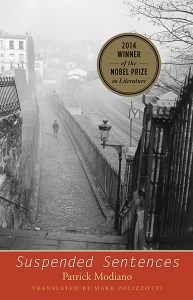 I sat at a sidewalk table of one of the cafés facing the Charléty stadium. I constructed all the hypotheses concerning Philippe de Pacheco, whose face I didn’t even know. I took notes. Without fully realizing it, I began writing my first book. It was neither a vocation nor a particular gift that pushed me to write, but quite simply the enigma posed by a man I had no chance of finding again, and by all those questions that would never have an answer.

So writes the narrator of Flowers of Ruin (Fleurs de Ruine), the third and final novella in Patrick Modiano’s book Suspended Sentences. After all of the hoopla over his winning the Nobel Prize for literature, I was impatient to check him out for myself. So I headed over to the great Prairie Lights Books in Iowa City to see what was in stock. At the moment, Suspended Sentences was my only option, but it turned out to be a good introduction to Patrick Modiano. I read the book compulsively for the next few hours, sucked in by Modiano’s voice and pacing.

Each of these novellas involves two or three layers of time. The narrator of Suspended Sentences (Remise de Peine), for example, tells us he is writing in 1990, but the focus of his attention is split between events that occurred in the early 1930s and the mid-1960s. In all three novellas, the narrator tries and fails to stitch together the pieces of an elusive story. Modiano’s narrators are usually bit players with obstructed views. They have strong journalistic/detective instincts, but only seem to unearth more puzzles than answers. People lie and tell contradictory stories or simply remain silent. People disappear. The evidence is inconclusive. The city of Paris is muffled in rain and fog. The only things that remain are hypotheses.

In Afterimage (Chien de Printemps), the narrator relates his brief acquaintance with Francis Jansen, a Magnum-type photographer who used to hang out with the photojournalist Robert Capa during the Second World War. Jansen reveals very little and the narrator tries to fill in the gaps with research and bits of observation. At the end of the novella, the narrator tells us what happens when Jansen tries to obtain his birth certificate.

From what I could understand, he had gone to the Belgian and Italian consulates to get a copy of his birth certificate and other documents he needed in anticipation of his departure. There had been some confusion. From Antwerp, his birthplace, they had sent the Italian consulate the records for a different Francis Jensen, and that one was dead…He no longer knew which man he was. He told me that after a certain number of years, we accept a truth that we’ve intuited but kept hidden from ourselves, out of carelessness or cowardice: a brother, a double who died in our stead on an unknown date and in an unknown place, and his shadow ends up merging with us.

In Suspended Sentences, the narrator recounts a lengthy period when his father mysteriously traveled to Brazzaville frequently and his mother was touring Algeria with a troupe of actors, causing them to deposit him and his small brother in the care of three women in a Parisian suburb – Hélène, an ex circus performer, Annie, who might be her lover, and Annie’s mother. He slowly realizes that some sort of criminal activity is taking place at the fringes of his awareness. And in Flowers of Ruin the narrator becomes obsessed with a double suicide that occurred in 1933 and with a mysterious man he met in the 1960s. The two episodes are tenuously linked to each other and, perhaps, to the narrator’s father, a man he has apparently lost track of.

Judging from the three novellas here, Modiano is more interested in the enigma of personal histories than with History with a capital H. Nevertheless, throughout each of these stories there are occasional traces of the War, internment camps, Nazi collaborators, May ’68. They lay in the path of the book like slightly raised cobblestones that one momentarily trips over before continuing on. It is not yet clear to me exactly what Modiano might be saying about the relationship between his characters and History when, for example, he places without explanation or elaboration an innocuous reference to the “Port of Austerlitz warehouses” in the midst of the paragraph quoted below. These warehouses, as we know from Sebald’s Austerlitz and other sources, were the site where the Nazis transported deportees to concentration camps and stored confiscated Jewish property.

Of all the neighborhoods on the Left Bank, the area that stretches from the Pont de Bercy to the fences around the Jardin des Plantes remains the most crepuscular for me. One arrives by night at the Gare d’Austerlitz. And night, around here, smells like wine and coal. I leave behind the train station and those dark masses along the Seine that were referred to as “Port of Austerlitz warehouses.” The automobile headlights or the flashlight illuminate a few feet of the Quai Saint-Bernard, just in front. The smells of wine and coal now mix with the scent of leaves form the botanical gardens, and I hear the cry of a peacock and the roar of a jaguar and a tiger from the zoo. The plane trees and the silence of the Halle aux Vins. I am enveloped by a cellar-like chill. Somewhere someone is rolling a barrel, and that doleful sound slowly fades into the distance. It seems that in place of the old wine market they’ve now erected tall concrete buildings, but wide as I might open my eyes in the dark, I can’t see them.

Suspended Sentences seems, at times, like the literary version of French New Wave cinema, something Modiano writes about with admiration. The emphasis in the writing here is on mood, not story line, and his charismatic, shadowy characters are usually hiding something – a criminal background, a betrayal, a false past. A pale stain of guilt pervades these pages. The title Suspended Sentences, with its double reference in English to both writing and criminal penalties, is, in fact, an inspired choice, richer than the French Remise de Peine, which is a judicial reduction in a penalty. This is from the final paragraph of Flowers of Ruin:

Later on, I’ll be called to account. I feel a certain guilt, the reason for which remains vague: a crime to which I was accomplice or witness, I couldn’t really say. And I hope this ambiguity will spare me from punishment….But sooner or later, everyone is called to account.