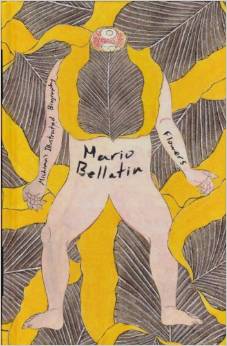 Mario Bellatin is a trickster who loves to sow confusion. I recently wrote about Bellatin’s 2012 book Shiki Nagaoka: A Nose for Fiction, his fake biography of a non-existent Japanese writer. In Mishima’s Ilustrated Biography, he gives us a biography (of sorts) about the real Japanese writer Yukio Mishima, but this biography doesn’t begin until after Mishima has committed suicide and after his ritual decapitation by a colleague.

Mishima is part of a slim, bilingual volume that contains two brief novellas – Flowers (Flores) and Mishima’s Ilustrated Biography (Biografía Illustrada de Mishima). But Mishima is the work that most interests me today. The Mishima we are introduced to seems to be quite alive but lacking his head. Bellatin sketches out a number of disconnected episodes from Mishima’s extended life, many of which are superficially banal; he travels, attends conferences, visits a university, goes to the mall. But nothing in a Bellatin novel remains banal for long. Events mutate and spin off in unexpected directions. Take the example of Mishima’s attempt to find a substitute for his missing head. At first, a craftsman makes him a “rudimentary” head that “looks more like an archaic grenade than an integral part of his body.” He then considers having a kabuki mask made, but later decides that the making of a new head should be a “community project” wherein everyone would have shared responsibility for the end result. And then suddenly the subject is dropped, never to reappear. In Mishima, ideas are thrown out, explored (or exploited), then forgotten, as if attention-deficit has set in.

Bellatin likes to remind us of the utter artificiality of writing, of words, and, especially, of literary genres and forms. There’s a sense of conceptual game-playing to Mishima. What would a biography look like if it was about the life someone leads after his death? What would photographs be like that remained undeveloped? “What kind of fear is capable of generating writing like this?” is a question Mishima asks of himself.

On more than one occasion, Bellatin’s  portrait of Mishima and his own biography begin to merge. Mishima decides to research the drug thalidomide, which, at one time, caused tens of thousands of newborns to have birth defects. (Bellatin’s own right arm is deformed, apparently due to thalidomide or something very similar.) Bellatin even goes so far as to ascribe to Mishima the titles of books written by Bellatin himself, including Beauty Salon and Chinese Checkers.

Appended to the end of the written portion of Mishima’s Illustrated Biography are the promised illustrations themselves – fifty photographs in both black-and-white and color. It doesn’t take long to realize that the authenticity of the photographs and and the accuracy of their captions is extremely dubious and that the visual evidence in the photographs rarely supports the claims made by their associated captions.  Unfortunately, Bellatin’s playful, but mostly lame commentary on the believability of photographs will strike most readers as old news.

Double page spread from Mishima’s Illustrated History. (Bellatin is the man in the lower left photograph. Click to enlarge.)

Bellatin’s work is often lauded for being “fragmentary” and “discontinuous.” The same adjectives seem to apply to the overall body of his work. He is the exact opposite of a writer like Patrick Modiano, who I have been reading off and on over the past few months. Modiano essentially writes a variant of the same book over and over, creating a core narrative kernel that he then reexamines, refines, and reworks. Bellatin, on the other hand, is too impatient to stick with any subject for more than a few paragraphs, much less over the course of multiple books. After reading a handful of his books, Bellatin is starting to seem like a descendant of the conceptual and process artists of the 1960s. A few years ago he participated in the “Documenta” exhibition held every four years in Kassel, Germany, through a project he called The Hundred Thousand Books of Bellatin. His proposal was to print one thousand copies each of one hundred different books that he would write, and the related publication contained a suggested list of one hundred possible topics, including: “The Olivetti typewriter bought in a Communist country” and “The act of immersing postcards of classic paintings in the puddles of seawater trapped between rocks.”

I have to admit that I’m of two minds about Bellatin. I tend to think that his works appear more innovative than they really are. We’ll see what happens as I read more of his books, but at this stage my interest is beginning to wane.