A couple of weeks ago I called attention to an exhibition that had just opened in London called “Melancholia: A Sebald Variation.” Poet and translator Will Stone recently paid a visit to the Inigo Rooms of Somerset House and wrote a review of the exhibition for The London Magazine. “This exhibition constitutes a rare gift” to the viewer, he wrote. Unfortunately, the magazine doesn’t provide online access to non-subscribers, so I asked Will if I could reprint small portions of his piece.

According to Will, the exhibition is really “about destruction, or rather W.G. Sebald’s eponymous work On the Natural History of Destruction (1999) and the way melancholy alluringly affixes to these tragic scenes, which, once having leaked away the reality of their human suffering, become artistically aligned images whose visual message creates a space for new creativity.”

With Sebald as a kind of spiritual ringmaster, contributing performers come from a range of contemporary artistic backgrounds and mediums from across Europe. They are Tacita Dean, Susan Hillier, Dexter Dalwood, Guido Van der Werve, George Shaw, Jeremy Wood and Anselm Kiefer. A modest collection of Sebald’s mysterious photographic material is also under glass here, drawn from the Marbach archive. Sebald famously experimented with the insertion of photographic images within text, a trend which has now since caught on. But Sebald’s use of images was highly original, eccentric and complex, a means of suggestion rather than straight depiction, as if he followed the edicts of symbolism with a cheeky nod to surrealism. Sebald’s ‘taking to task’ of those post-war German writers who had repressed the memories of the bombing, lead to a re-evaluation of the so-called ‘Trümmerliteratur’ (Rubble literature) and hence further responses in the visual arts…

Of the remaining exhibits, special mention should be made of Tacita Dean’s “Our Europe” and “I had a Father,” a series of new works on slate specially commissioned for the exhibition and dynamic Dutchman Guido van der Werve’s award-winning endurance-art film project Nummer Vierteen: Home, 2012, a highly personal and searching absurdist work that uncompromisingly explores themes of exile, place and history.

I wanted to highlight Will’s comment on the work of Tacita Dean so that I could also make reference to the latest of the great Cahiers Series, from Sylph Editions and the Center for Writers & Translators. I’ll let the blurb from Sylph Editions website do the describing:

A woman travels to seven ‘invisible’ countries, and from the moment of arrival is surprised, challenged, disturbed by what she discovers. In the brightly coloured and somewhat sinister world conjured by American novelist Sylvia Brownrigg, what is standard – passing through customs, checking in to a hotel, pronouncing words in a foreign language – becomes fraught; the traveller’s urge to escape and seek adventure vies with her sense of melancholy and anxiety at feeling unmoored. Brownrigg explores border-crossing, cultural misunderstanding, touristic voyeurism and naïveté, as her visitor attempts to navigate the environments she encounters. Accompanying the text are images by the celebrated British artist Tacita Dean which extend the traveller’s journeys into spheres that turn almost uncanny in their combination of abstraction and realistic detail.

Dean’s evocative drawings are done in chalk and other materials on blackboards, on found postcards, and on top of black-and-white photographs. Each piece seems to project a world that is slightly atilt, which nicely corresponds to the blend of artifice and reality that dominates Brownrigg’s story.

Finally, if you happen to be in Bruges on October 18, Will Stone will be reading from his new translation of the poems of Georges Rodenbach at 7:00 PM. This is happening at Brugse BoekhandelBrugse Boekhandel, Dijver 2, Bruges. Please call the bookstore at 050 33 29 52 to confirm a reservation. It’s co-sponsored by another great book dealer, Marc Van de Wiele Antiquariaat. Rodenbach wrote Bruges la Morte (1892), one of the first novels that deliberately included photographs as an integral part of the text. From the publisher’s website:

This is the first-ever collection of Rodenbach’s poetry to be published in English translation. In it, Rodenbach’s vision of Bruges, so brilliantly portrayed in his famous symbolist novel, Bruges la Morte, is drawn with even more potency. Using the symbolist devices of suggestion and mood, Rodenbach, in these poems, sifts the elements that make up the decaying Bruges. He sees it as a medieval corpse laid out for him to ‘rescue’ through his interpretation of its atmosphere of melancholy, its seductive romantic decline and its loneliness. 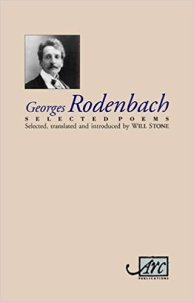