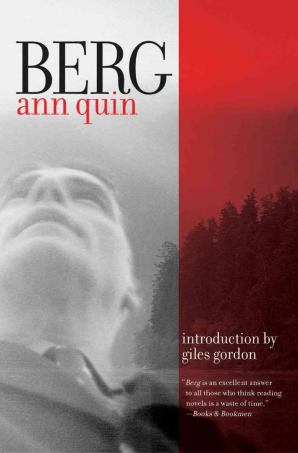 In Ann Quin’s first novel, the black comedy Berg, “Alistair Berg, alias Greb, commercial traveler, seller of wigs, hair tonic, paranoid paramour” has set out to murder his father, a semi-itinerant womanizer living in a flop house with his current girlfriend Judith. Alistair’s father abandoned him at such a young age that he does not know that the young man who has moved into the adjacent room is his own son, bent on parricide. Alistair befriends the couple, then proceeds to spy on them, listening to them making love and fighting through the thin partition that separates their rooms. He slowly insinuates himself into their lives, but, when presented with several opportunities to murder Berg, Alistair falters, and in a role reversal, he suddenly becomes his father’s rescuer, more than once steering his hopelessly drunken father safely home. By the end of the novel, the hapless Alistair has displaced his father and is living with Judith. Beyond that brief plot summary, don’t ask. It’s complicated.

Berg (1964) is a restless, staccato piece of writing that involves cross dressing, identity theft, mistaken identities, a ventriloquist’s dummy, and endless literary mayhem. Quin’s narration deftly moves into and out of Alistair’s consciousness, alternately observing him and tracking his train of thought—an untidy and unstable construct of glimpses of exterior reality, memories, snippets of conversation, spontaneous physical reactions, and rare moments of reflection. It is up to the reader to try to put Humpty Dumpty back together.

Alistair is an interesting character. As a child, he was abandoned by his father, doted on by an overly cautious mother, abused by his uncle, and called a “cissy” by his school mates. As an adult, he has learned he is sterile and he seems to suffer from sexual dysfunction. Why wouldn’t he want to murder his father? He’s observant, curious, and even a bit sentimental, but his worldview has been so stunted that he’s incapable of learning or self-improvement. He doesn’t understand the first thing about himself or his father and he doesn’t believe there is anything to learn about women. “Who would wish to go beyond the surface in a woman, anyway?”

[Alistair] stared out the window. The street bound by snowdrifts. He leaned out. Icicles hanging from the pipes—splinters of glass—reflecting the shadows from clouds. A muffled town assuming the atmosphere of a cathedral, a sacrilege if one spoke above an ecclesiastical whisper. Sizzling of frying, the warmth of the room, and Judith softly humming, brought a sudden sweep of nostalgia; a tangle of broken wires, a need to gather them up, sort out, graft together, encircle the mind, and in becoming: know.

“And in becoming: know.” Quin seemed to be trying to grapple with a number of questions in Berg. How does a “self” gets determined? Is there really a border between the self and the world, between inner and the outer? In his recent biography of Kafka, Reiner Stach writes that Samuel Beckett “was taking the next logical step in the development of the European novel, the disintegration of a consistent inward and outward awareness and the undermining of the questionable identity known as the ‘I’.” Quin was taking the baton from Beckett. And, like Beckett, she was asking: Is there any reason to carry on? For Quin, this was not a rhetorical question. Alistair harbors thoughts of suicide and seeks some kind of relief or release.

If only sleep could release me. Stretching his legs he tried relaxing, first with the toes—this one went to market, and the remaining? He climbed off the bed, swept back the curtains, and watched the tapering fingers from the trees strike a window opposite. Half in the light he stood, a Pirandello hero in search of a scene that might project him from the shadow screen on to which he felt he had allowed himself to be thrown. If only I could discover whether cause and effect lie entirely in my power.

As the Pirandello reference suggests, Berg, with its plot of one farcical moment after another, feels related to the theater of the absurd or the great British tradition of burlesque. Quin has a great deal of fun with episodes of male bungling and ineptitude that seem right out of the Keystone Cops. And finally, as the novel closes, the plot seems about to start all over anew. A man who looks just like Berg (except he’s “more classy”) and whose luggage looks identical to Berg’s is moving into the room that Alistair just vacated.

Curiously, Quin seemed to clearly signaled that the psychological arc of Berg is a movement toward clarity. The book opens with a view toward the sea through a window which is “blurred by out of season spray,” while it closes looking out “a window just cleaned.” I just don’t think it is Alistair who came into any clarity. I think it was Quin.