Posts from the ‘Adam Zawacki’ Category 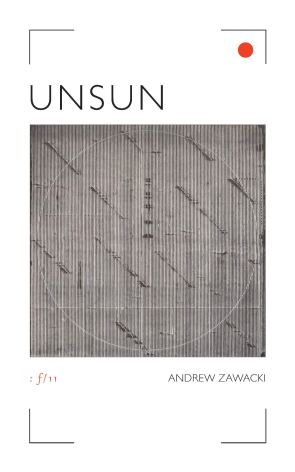 Poetry geeks tend to write things about Andrew Zawacki’s poetry like: “Unsun takes on digital networks, international transit, the uneven movements of capital, and the unrelenting feedback loops of data surveillance, weather disaster, war” (from the Coach House Books blurb). In somewhat simpler terms, it’s fair to say that Zawacki is ever alert to all that is going on around him. Most of the poems in Unsun deal with nature, with walks outdoors, through forests, into a “fox field at evenfall.” He is especially attuned to the many ways in which industry and technology are attacking and, often, ruining our environment. “The sky is not falling it’s / failing” (From “Outside a Ruined Casino.”)

Many of the poems in his recent book  Unsun:f/11 (Coach House Books, 2019) draw on the terminology of scientific disciplines, including geology, mathematics, meteorology, and astronomy, plus the fields of medicine, computer programming, photography, and probably several others that I have forgotten, not to mention a couple of foreign languages. In other words, I spent a lot of time Googling things as I read his vocabulary-expanding poems.

We are all on our way
Out don’t
Rush
(from: “U9 to Zoo Station Sonnet”)

My take on these challenging poems is simple: don’t rush. One of Zawacki’s goals is to encourage (i.e., force) the reader to look at things differently. More precisely. More scientifically. This is implied in the book’s subtitle f/11, which represents the f stop, or aperture, of a camera lens. In this case, f/11 suggests a lens in which nearly everything should be in sharp focus. END_OF_DOCUMENT_TOKEN_TO_BE_REPLACED