Posts from the ‘Andre Breton’ Category

A Book Interrupted by Love 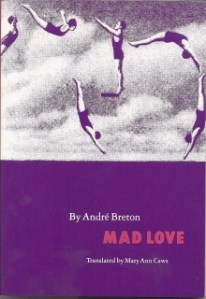 Not long ago I wrote about Andre Breton’s 1928 novel Nadja, which includes embedded photographs.  In 1937, Breton wrote another photographically-illustrated novel called L’Amour Fou, or Mad Love.  Oddly, it took half a century for an English translation to appear from the University of Nebraska Press (by Mary Ann Caws).  Mad Love begins as a meandering essay about love, lovers, beauty, crystals, symbols, and much more.  Breton’s agenda in these early pages is to redefine these terms within the context of Surrealism.  The greatest kind of beauty “would not come to us along ordinary logical paths,” but will come about “convulsively.”  He points to the pleasures of automatic writing: “what is delightful here is the dissimilarity itself which exists between the object wished for and the object found.”

“Convulsive beauty will be veiled-erotic, fixed-explosive, magic-circumstantial, or it will not be.”   And lest anyone try too hard to understand this kind of love or beauty, he warns that “interpretive delirium begins only when man, ill-prepared, is taken by a sudden fear in the forest of symbols.”

About a third of the way through the book, Breton explains what he is doing:

I had just some days earlier written the beginning text of this present book, a text which takes full account of the mental and emotional dispositions at that time: a need to reconcile the idea of unique love with its more or less sure denial in the present social framework, the need to prove that a solution, more than sufficient, indeed in excess of the vital problems, can always be expected when one deserts ordinary logical attitudes.

But at this moment, a woman appears who makes him desert “ordinary logical attitudes.”  She approaches him, probably in a cafe where he is writing.  It is a moment that a smitten Breton notes with unexpected precision.  “And I can certainly say that here, on the twenty-ninth of May 1934, this woman was scandalously beautiful.”

This young woman who just entered appeared to be swathed in mist – clothed in fire?  Everything seemed colorless and frozen next to this complexion imagined in perfect concord between rust and green…This color, taking on a deeper hue from her face to her hands, played on a fascinating tonal relation between the extraordinary pale sun of her hair like a bouquet of honeysuckle…

A few pages later, however, the unnamed woman disappears from the book for a long spell and Breton’s convoluted unfolding of Surrealism begins anew.  Mad Love concludes with an utterly remarkable letter addressed “Dear Hazel of Squirrelnut,” to be read in 1952 on the girl’s 16th birthday.  “Hazel” is the eight-month old daughter that resulted from this liaison.  On one level, Breton’s letter is a typical mix of fatherly advice, hyperbole about love and pain, and a wistfulness for a future he feels he’ll never witness.  But it is also a deeply moving document of Breton’s struggle.

I was thinking of all this, feverishly, in September 1936, alone with you in my famous unliveable house of rock salt.  I was thinking about it between reading newspapers telling, more or less hypocritically, the episodes of the Civil War in Spain, the newspapers behind which you thought I was disappearing just to play peek-a-boo with you.  And it was so true, because in such moments, the unconscious and the conscious, in you and in me, existed in complete duality near each other, keeping each other in total ignorance and yet communicating at will by a single all-powerful thread which was the exchanged glance between us.  To be sure, my life then hung only by the slightest thread.  Great was the temptation to go offer it to those who, without any possible error and any distinction of tendencies, wanted at any price to finish with the old “order” founded on the cult of that abject trinity: family, country, and religion.  And still you held me by that thread which is happiness, such as it pierces the web of unhappiness itself.  I loved in you all the little children of the Spanish militia, like those I had seen running naked in the outer district of Santa Cruz, on Tenerife.  May the sacrifice of so many human lives make of them one day happy beings!  And yet I did not feel in myself the courage to expose you with me to help that happen.

This section of the letter is followed by a cropped version showing the right half  of the now famous photograph by Henri Cartier-Bresson, Children in Seville, Spain, 1933, one of twenty photographs in Mad Love by artists such as Man Ray, Dora Maar, and Brassaï.

The unnamed woman in Mad Love is a fictionalized version of Breton’s second wife Jacqueline Lamba (1910-1993).  They had a daughter named Aube (Dawn).  Breton and Lamba divorced in 1943, and she later married the American artist David Hare.

I finally reread Andre Breton’s 1928 novel Nadja for the first time in many years and it was hard not to see intriguing parallels with the photography-embedded books of W.G. Sebald. It was a little shocking to realize that Nadja, first published in Paris in 1928, wasn’t available in English until Richard Howard’s 1960 translation for Grove Press. Nadja often gets referred to as a Surrealist love story, although Nadja doesn’t appear until more than sixty pages into the brief 160-page novel (in the English version, that is). Those first sixty pages or so are a blend of theory, Surrealist gossip, Breton’s back story, dreams, and assorted excursions through Paris. When Nadja appears, the book briefly shifts to dated diary entries, as if the impact of their meeting momentarily demands immediacy. Ultimately, Nadja is committed to a sanitarium and the novel returns to straightforward prose when the narrator finally has the distance to analyze Nadja’s impact on his life and thinking.

After Nadja, the second most important character in Nadja is the city of Paris. Breton’s Paris serves a similar purpose as cities like London, Manchester, and Antwerp do for Sebald, acting as a kind of stage, potent for its ability to disorient the viewer and reward him with strange new sights and insights.

There are many ways of thinking about Nadja and what she represents for Breton. She’s a free spirit who describes herself as a “soul in Limbo.” She’s clinically unable to exist long in the normal world and ends up in a sanitarium, where she spends the remainder of her life. “The essential thing is that I do not suppose there can be much difference for Nadja between the inside of a sanitarium and the outside,” the narrator grimly notes. Nevertheless, Nadja unlocks endless unforeseen possibilities for the narrator, who is immediately captivated by her eyes. “What was it they reflected – some obscure distress and at the same time some luminous pride?”

The character Nadja reminded me of Ernst Herbeck, the prolific Viennese schizophrenic poet that Sebald visits Vertigo. The two spend a long day taking a walk, during which they seem to exchange very little with each other.

When we parted, Ernst, standing on tiptoe and bowing slightly, took his hat from his hand and with it, as he turned away, executed a sweeping motion which ended with him putting the hat back on; a performance which seemed to be, at the same time, both childishly easy and an astonishing feat of artistry. This gesture, like the manner in which he had greeted me that morning, put me in mind of someone who had traveled with a circus for many years.

Breton and Sebald find in Nadja and Herbeck a kind a inexplicable, inarguable authenticity that no “normal” person seems to offer up.

“Happily the days of psychological literature, with all its fictitious plots, are numbered,” Breton wrote early in Nadja, prematurely predicting the demise of traditionally plotted fiction. Nadja is not too dissimilar to Sebald’s style of prose fiction in which history, autobiography, travel, literary criticism, and other genres coexist. Curiously, both Sebald and Breton elevate coincidence to a higher level of meaning; although for different ends, I think. For Breton, good Surrealist that he is, accidents and coincidences are much like automatic writing; they are events that set aside the limits of traditional logic and perception and spontaneously create new, unexpected connections. Sebald, on the other hand, often uses coincidences to suggest a sense of hidden interconnectedness.

Breton doesn’t embed photographs in the same way that Sebald does.  Instead, they are treated like illustrations in a typical work of non-fiction. Each illustration is a full-page plate, with plate numbers, captions, and, on occasion, a credit to the photographer (Man Ray, for example). To assure that the reader makes the correct connection between the illustration and text, each plate mentions the page number on which the related quote appears. Nevertheless, Breton’s playful selection and use of illustrations foreshadows Sebald’s own practice. In addition to portraits and buildings that let the reader visualize his text, Breton adds some Surrealist touches by reproducing incidental things like documents and drawings.

The great book cover for Nadja, by the way, which Grove Press has stuck with for nearly fifty years now, is by designer Roy Kuhlman, who did many of Grove’s classic book covers.