Posts from the ‘Anne Carson’ Category

The remarkable collaboration between the Center for Writers & Translators at the American University of Paris and Sylph Editions continues to put out thoughtful and beautifully-produced publications.  They have just released numbers 21 and 22 in their Cahiers Series, with texts by Anne Carson and Paul Griffiths.

In The Tilted Cup: Noh Stories (Cahier 22), Paul Griffiths translates eleven traditional Noh plays and turns them into eloquent, brief stories. In a brilliant bit of pairing, the stories alternate with color photographs by John L. Tran showing mostly empty shopping malls and other indoor public spaces. As the editors of the Cahiers Series put it, Tran’s photographs “explore the relation between theatricality and narrative, while offering hints of a very different vision of infinitude.”

Anne Carson’s Nay Rather (Cahier 21) deals largely with the act of translation.  It opens with the essay “Variations on the Right to Remain Silent,” in which Carson discusses “where one language cannot be rendered into another,” moving through Homer, Joan of Arc, Friedrich Hölderlin, Paul Celan, and the painter Francis Bacon.

The essay is followed by seven translations of the same fragment by the 6th century BC poet Ibykos, which I found to be the highlight of this Cahier. Here is Carson:

What follows is an exercise, not exactly an exercise in translating, nor even an exercise in untranslating, more like a catastrophizing of translation. I shall take a small fragment of Greek lyric poetry and translate it over and over again using the wrong words. A sort of stammering.

What Carson does is to translate the fragment using different restricted vocabularies. In one example she uses only words found in Bertold Brecht’s FBI file, while in another she draws upon the names of stops and the words found on signs from the London Underground, while in a third she limits herself to the words found in the owner’s manual for her microwave oven. Purists may recoil at the very concept of translating with “the wrong words,” but I found the the results to be immensely intriguing.  Even though the fragments are strikingly different from one another (with the single exception of the line that reads “Nay rather,” which is found in every translation), each version uncannily manages to point back to the original, suggesting that a gifted poet/translator can create linguistic approximations of poems even with an extremely limiting vocabulary.

Finally, Cahier 21 includes a poem by Carson called “By Chance the Cycladic People” (one page of which is shown below) in which the lines have been shuffled by a random number generator. The poem is accompanied by a series of simple, elegant drawings and gouaches by Lanfranco Quadrio. 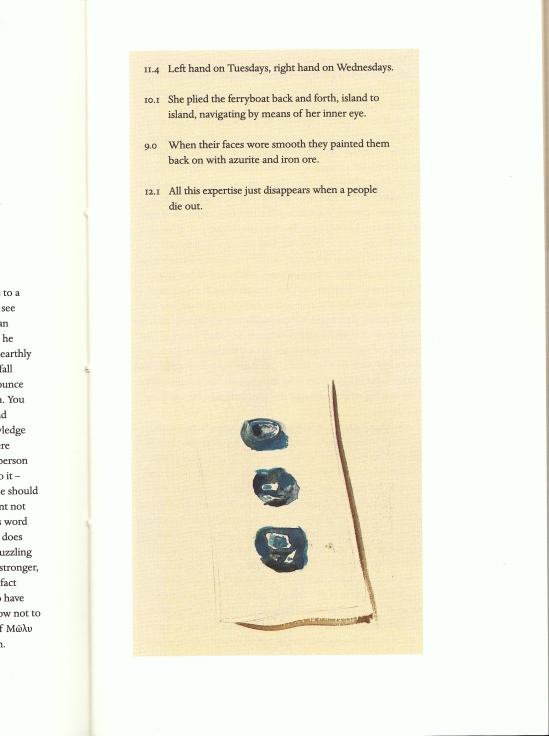 An accordion-fold book housed in a clamshell box, Nox is a single collage-like poem composed of dictionary entries, snapshots, scraps of paper, postage stamps, written memories, and other texts  in which we see Carson as she copes with the death of her brother, as she tries to comprehend “the smell of nothing,” “the muteness,” and the meaning of memories scattered across a lifetime.  Just as the physical book unfolds and then collapses back into itself, the unifying structure of Nox is the unfolding and collapsing of a short poem by the Roman poet Catullus.  Nox opens with the poem – known as Poem 101 – in Latin.  As you turn each page or further unfold the book (whichever way you choose to read Nox), you are confronted with the individual dictionary entries for every Latin word in Catullus’ poem.   As the dictionary entries mount up and you realize that Carson is working toward an English translation of the poem, these entries induce a kind of literary vertigo.  Each Latin word has multiple definitions that can be wildly different from each other, if not seemingly contradictory.  The net effect is to make the reader reel from the endless English permutations possible from sixty-three Latin words.

Poem 101 is an elegy to Catullus’ brother.  Several rudimentary translations can be easily found online, but none have the powerful ambiguity and hurt of the version Carson achieves.

In parallel with the unfolding of the Catullus poem, Carson examines the meager scraps that constitute her memories and communications with her brother, who lived his life largely abroad and estranged from his family.  Unlike Poem 101, however, the enigma of her brother’s life seems to expand in many directions without ever coming to any resolution.

While there are scores of novels that use embedded photographs, this is only the second book of poems I have run across in which photographs are used interchangeably with textual material.

With a retail price of $29.95, Nox is a remarkable piece of publishing.  They have produced an eerie facsimile of Carson’s rather crude home-made album.  New Directions has also issued a special signed version of Nox in in edition of 100 copies.