Posts from the ‘Claudia Rankine’ Category

Don’t Let Me Be Lonely 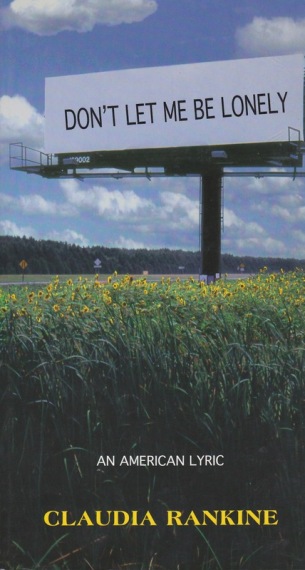 Claudia Rankine’s Don’t Let Me Be Lonely: An American Lyric (St. Paul: Graywolf, 2004) is a book-length prose poem filled with photographs and a few non-photographic images. It toggles between meditation and anger on a wide range of subjects, including death, cancer, depression (and anti-depressants), suicide, rape, 9/11, racism, history, politics, and literature, but the central trope is the ubiquitous television set. A repeated image of a static-filled television screen serves to separate the segments of the poem, signalling that Rankine is about to change the channel on us. The book’s epigraph from Aime Cesaire is an admonition to not be a spectator: “And most of all beware, even in thought, of assuming the sterile attitude of the spectator,for life is not a spectacle, a sea of grief is not a proscenium, a man who wails is not a dancing bear…” In Rankine’s poem, the television is so much a symbol for the media, it’s simply the biggest source of bad news and despair. In one section, with the controversial vote count over the reelection of George W. Bush as the backdrop, Rankine writes: “I stop watching the news. I want to continue, watching, charting, and discussing the counts, the recounts, the hand counts, but I cannot. I lose hope.” END_OF_DOCUMENT_TOKEN_TO_BE_REPLACED