Posts from the ‘Corsica’ Category

Women, Discrete Messengers of the Past 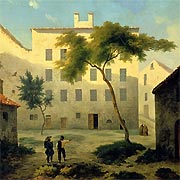 In W.G. Sebald’s short prose piece A Little Excursion to Ajaccio, the narrator purchases an admission ticket to Casa Napoleon (Napoleon’s birthplace museum) from a cashier of “very stately proportions.” He imagines her on an operatic stage singing “Lasciate mi morire or some such aria.”

Lasciatemi morire, also known as Ariadne’s Lament, comes from Claudio Monteverdi’s opera L’Arianna of 1608. This aria is the only surviving remnant of the opera, and it is only known because Monteverdi later published it separately as a madrigal, which is how it is usually found on recordings today.L’Arianna is the story of Ariadne, who has been left behind on the island Naxos by Theseus (the same event which inspired Richard Strauss’ wonderful opera Ariadne auf Naxos).As Ariadne sees her lover sail away, the aria Lasciate mi morire conveys her conviction that death is her only option.

Let me die!
And who do you think can comfort me
in such harsh misfortune,
in such great torment?

Sebald’s conflation of the cashier and Ariadne, who had been abandoned by the warrior-king of Athens, subtly reinforces a gender dichotomy that exists in the three longer pieces that comprise his uncompleted Corsican prose work (I’m ignoring the brief piece called La coeur de l’ancienne ecole, which appears to bear only a tangential relation to Sebald’s larger purpose in this work). In this gender dichotomy, to be brief, men destroy and women are left behind to hold the flame of remembrance alight and the household together. 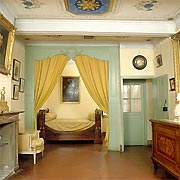 [The alcove where Napoleon was born in 1769]

Wandering through Casa Napoleon, Sebald’s narrator encounters another woman, a museum docent or caretaker, dressed in the colors of the tricolor, who also strikes him as being “of Napoleonic descent.”She brings to his attention an extraordinary piece of folk art, an elaborate Napoleonic family tree in the form of a giant oak, created at the end of the 19th century by the daughter of a local notary. “Whether out of love for the Emperor or for her father [another admirer of Napoleon], she must have devoted endless hours to her work.” The notary’s daughter is one of those obsessive characters that Sebald found fascinating (not all of whom, admittedly, were women), but here Sebald implies she is part of a long line of women from Napoleon’s era to our day who maintain and venerate the memory of the Emperor. Women serve as “discrete messengers of the past.”

By contrast, the only men that the narrator meets in Corsica “were participating in a ritual of destruction which long ago became pointless” – hunting. In his Corsican story The Alps in the Sea, Sebald’s narrator observes “the fever of the chase” that consumes the men of Corsica every September, as they attempt to hunt the animals that long ago were hunted nearly out of existence by their ancestors. Driving jeeps, dressed in paramilitary gear, bearing rifles and ammunition, “the Corsican hunters are not to be trifled with if you happen to stray into their territory.”

In the Corsican newspapers, the so-called ouverture de la chasses (the start of the hunting season) is one of the main subjects of reporting in September, together with the never-ending accounts of the bombing of police stations, local authority tax offices, and other public institutions.

All of this violence against animals and authority leads the narrator to recall Flaubert’s story Saint Julien l’hospitalier, an “utterly perverse tale of the despicable nature of human violence.”

We must remember that the Corsican texts posthumously assembled and published in the anthology titled Campo Santo are just the fragments of an uncompleted work that might have resembled Vertigo or The Rings of Saturn. Nevertheless the male/female roles seem so deliberately laid out that I would venture to say this was a theme that would have been developed further. In fact, there really isn’t an episode in the Corsican texts when men and women appear together except for the anonymous hordes of tourists the narrator encounters in Ajaccio or in the cemetery at Pliana, where the genders are intermingled indiscriminately.

Finally, here is an excerpt from the narrator’s description of a painting in the Musée Fesch in Ajaccio, a double portrait by Pietro Paolini of a woman with melancholy eyes and a dress “the color of the night” and her daughter.

Her right arm protectively embraces her small daughter, who stands in front of her turning sideways, toward the edge of the picture, but with her grave face, upon which the tears have only just dried, turned toward the observer in a kind of silent challenge. The little girl wears a brick-red dress, and the soldier doll hardly three inches high which she is holding out to us, whether in memory of her father who has gone to war or to ward off the evil eye we may be casting on her, also wears red. I stood in front of this double portrait for a long time, seeing in it, as I thought at the time, an annulment of all the unfathomable misfortune of life.

It is my sense that the word “annulment” is a miscue in the translation. Here is the original German:

I think Sebald’s intention was more along the lines of ” an abandonment of all the unfathomable misfortune of life”. Would anyone care to weigh in with a better translation of this sentence?