Posts from the ‘Daniel Mendelsohn’ Category

A stranger arrives in an unknown city after a long voyage. He has been separated from his family for some time; somewhere there is a wife, perhaps a child. The journey has been a troubled one, and the stranger is tired. . . He moves with difficulty, his shoulders hunched by the weight of the bags he is carrying. Their contents are everything he owns, now. He has had to pack quickly. What do they contain? Why has he come?

So begins Daniel Mendelsohn’s new book Three Rings: A Tale of Exile, Narrative, and Fate (University of Virginia Press, 2020). Mendelsohn, a classics scholar and humanities professor, is a natural story-teller and he has managed to turn a multi-century saga of literary criticism and history into an immensely entertaining, readable, and short(!) book. Three Rings originated as the Page-Barbour Lectures, which Mendelsohn delivered at the University of Virginia in 2019, and if only more literary criticism (and scholarship, in general) were delivered this way, it would have a much greater audience and impact.

There are actually three “strangers” or “rings” in Mendelsohn’s book, as we shall see, but his story begins with Odysseus.

In Book 19 of Homer’s Odyssey, the hero Odysseus has finally returned to Ithaca. Disguised, he has entered his own home, determined to murder his wife’s suitors and announce himself to her after many years of wandering. An old woman from the household offers him the traditional welcome of washing his feet and she recognizes a scar on his thigh. It should be a moment of great suspense and excitement—the great Odysseus is home at last! But instead, Homer begins a long digression into the past. As Mendelsohn puts it, Homer does the unexpected. He delays. And then he delays some more.

At this suspenseful moment the poet chooses not to proceed to an emotional scene of reunion between the old woman and her long-lost master. Instead, Homer brings the narrative of that encounter to a halt as he begins to circle back into the past: of how Odysseus got his scar in the first place. . . But this ring turns out to require another, since (the author of the Odyssey assumes) we must understand why Odysseus happened to be visiting his grandfather [at whose house he received the wound] in the first place. And so the poet traces a second circle, spiraling even further back into time.

Eventually, Homer works his way back to the moment when the old woman recognizes Odysseus’s scar and the narrative proceeds once again. These digressions into the past are ring compositions, a technique in which the narrative appears to stray away from its obvious direction only to eventually return to the point where it originally left off. “The material encompassed by such rings could be a single self-contained digression or a more elaborate series of interlocked narratives, each nested within another in the manner of Chinese boxes or Russian dolls.”

Mendelsohn says that he got the idea for this book during the writing of his previous book An Odyssey: A Father, A Son, and An Epic, when he was thinking about Eric Auerbach (1892-1957), a German Jewish scholar who left Germany in 1935 to live in Istanbul for more than a decade. It was there that Auerbach wrote his masterpiece Mimesis: The Representation of Reality in Western Literature, which was first published in 1946 and remains in print today. (I still have the copy I studied in college fifty years ago.) Mendelsohn started to wonder about “the connections between political exile and narrative digression” in connection with Auerbach, and so Auerbach becomes the first of the three “rings” in his book.

In Auerbach’s “epic journey through the literature of the West” there are “two cultural pillars” or styles into which all of literature could be divided: the Homeric or Greek technique, in which everything can be known and there exists, through the gods, a supernatural connection between all things; or the Hebrew style, which acknowledges that it is impossible to know everything and that the world is subject to interpretation. Mimesis, in part, tracks the ??? of these two styles throughout literary history. 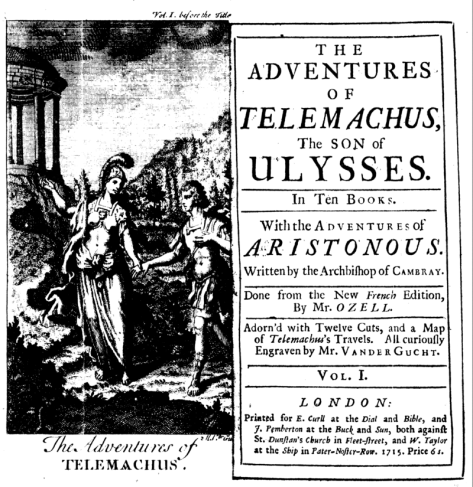 Mendelsohn’s second “ring” is the story of François de Salignac de La Mothe-Fénélon (1651-1715), a Catholic archbishop and writer, whose 1699 book The Adventures of Telemachus he calls “a fan-fiction sequel to the Odyssey.” Fénélon’s Adventures were originally constructed as “ethically instructive tales based on Homer’s Odyssey” that he used to teach the son of the Duke of Burgundy (and eventual heir to France’s Louis XIV), but which evolved into a fantastically convoluted series of digressions loosely based on Homer’s exploits.  Unfortunately for Fénélon, his “fantasia on Homeric themes” contained a number of lectures on good kingship, which Louis XIV took as an insulting critique of his own rule, and he banished the archbishop to an obscure post in far northern France.

Nevertheless, the Adventures became hugely popular and Mendelsohn speculates that it might have been the most widely read book in Europe throughout the eighteenth century until Goethe’s The Sorrows of Young Werther came along in 1774. Not only that, but the Adventures was so widely received in the nineteenth century that it was translated into “Turkish, Tatar, Bulgarian, Romanian, Armenian, Albanian, Georgian, Kurdish, and Arabic, among many other languages.” In the twentieth century, Fénélon deeply influenced Marcel Proust’s In Search of Lost Time, a novel which suggests to Mendelsohn “that a vast series of digressions could themselves form the largest imaginable ring, one that embraces all of human experience.” 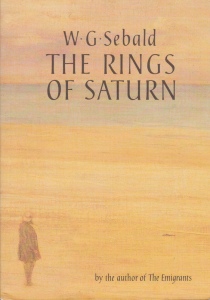 Mendelsohn’s third “ring” is W.G. Sebald. “The circles in Sebald’s restless narration lead us to a series of locked doors to which there is no key.” For Mendelsohn, Sebald is the embodiment of Auerbach’s preference for the Hebrew approach over the Greek, for the style that “refuses to reveal” over the one that is “all-illuminating.”

Auerbach’s distrust of the Greek technique raises a larger question about the problems of representation in literature, about the means by which writers make their subjects seem “realistic.” Naturally this question has plagued all kinds of artists as they have struggled with difficult subjects, one of the greatest and most difficult of these being, in our own time, the event that landed Auerbach in Istanbul: the German plan to exterminate the Jews of Europe during World War II. The difficulty of representation posed by this unimaginably destructive vent was most famously, if controversially, expressed in the oft-quoted dictum of Auerbach’s fellow German refugee Theodore Adorno: “nach Auschwitz ein Gedicht ze schreiben, ist barbarisch,” “to write a poem after Auschwitz is barbaric.”

In this section, Mendelsohn traces his personal attachment to each of Sebald’s four key books of prose fiction, but focuses on The Rings of Saturn as “the most emblematic of this author’s strange style.” “The narrative rings, circles, digressions, and wanderings. . . we find in Sebald seem designed to confuse, entangling his characters in meanderings from which they cannot extricate themselves and which have no clear destinations.” While Homer’s rings eventually lead back to where they left off and to a new beginning, for Sebald “the twisting history of the world is written by the hiders.”

Three Rings is a book you must read for yourself, to witness Mendelsohn as he unravels and lays bare the connections between Homer, Auerbach, Fénélon, Sebald, and others. In a way, it’s ironic that Mendelsohn relates so intimately with those who believe in the “irretrievability of the past,” because for him the stories of the past are vital to understanding the present. What he transmits so magically in Three Rings is his infectious passion for learning and sharing with others.