Posts from the ‘Daša Drndić’ Category

“Behind Every Name Is a Story”: Trieste

Behind every name is a story.

In the middle of Croatian writer Daša Drndić’s documentary novel Trieste (MacLehose Press, 2012) there is a forty-four page, double-columned list naming the 9,000 or so Jews “who were deported from Italy or killed in Italy in the countries Italy occupied between 1943 and 1945,” starting with Clemente Abeasis and ending with Jerachmil Zynger. This memorial to the murdered is followed by another, much shorter listing—complete with mini-biographies—of the more senior S.S. members of the Aktion T4 group who worked in Trieste at the notorious prison known as San Sabba, which served as a transit center to Auschwitz and other concentration camps and housed its own gas chamber.

In this novel so dedicated to documenting victims and perpetrators alike, Drndić gives us a central character who is neither and both. Haya Tedeschi was born to a Jewish father and Catholic mother in Gorizia, an Italian town near Trieste. Now in her eighties (it’s 2006), Haya spends her day sifting through a basket of photographs, postcards, newspaper clippings, and magazines, the only remaining documents of her life. When the Nazis took over Gorizia in 1943 she was barely twenty and she—like the rest of her family—used her Catholic upbringing and membership in a fascist organization to be shielded from the persecution brought upon many of its Jewish residents. (Drndić’s list of murdered Jews includes more than forty people named Tedeschi, which, ironically, means German in Italian.) Haya even entered into a wartime romance with a German who already happened to have a family back in Germany, S.S. Untersturmführer Kurt Franz. This liaison led to the birth of a baby boy. But when Franz was ordered to a new post the baby boy mysteriously disappeared. Haya has spent the sixty years since then trying to find out what happened to her son.

Unbeknownst to Haya, her child had been kidnapped as part of the Nazi’s Lebensborn program, which aimed to place racially desirable children—many of whom were forcibly removed from their parents—into adoption with “good” German families. Presumably on instructions form Kurt Franz, her child had been sent to Schloss Oberweiss, a centuries-old Austrian castle that housed the Lebensborn nursery and adoption program.

Towards the end of the novel Drndić shifts focus to Hans Traube, an Austrian professional photographer who has learned from his dying mother that she was not really his birth mother. He, too, has accumulated “a terrible mess” of “strewn letters and documents, books, testimonies, photographs, heaps of photographs,” all during the eight-year search of his own origin. After considerable research he manages to discover who his real parents were. Horrified by what he learns of his father, he nervously heads to Gorizia to locate his mother. As the son enters the room to meet her, the novel ends. 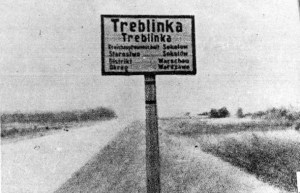 Trieste is a book with a mission. Drndić has embedded a substantial amount of historical writing within her fictional story of the Tedeschi family. There are detailed histories of San Sabba and Schloss Oberweiss, along with excerpts from Holocaust survivor testimonies and the transcripts of several Nazi trials, all of which makes for grim but compelling reading. Drndić avoids writing a traditional historical novel by writing as if it her story was, indeed, history. Drndić’s language is precise, clinical, and the novel is written in the present tense, giving us the sense that history is unfolding before our eyes. And when writing about the past, she never enters the minds of characters. We only observe them without knowing what they are thinking, so we are left to determine their motivation solely from the facts we are given. Drndić also includes numerous images (photographs, maps, sheet music, and documents) that are dropped like breadcrumbs into her text. Their purpose is to be indisputably real, to serve as proof.

INTERVIEWER: How do the archival materials in your fictions—photographs, sheet music, testimony—help you articulate or complicate the trauma of history?

DRNDIC: They do not help me, they are supposed to help the reader. The reader who has lost the capacity to imagine, to rely on the word, on language, and its immense possibilities that are less and less recognized and abused. Language has turned into tweeting, ideas are blogged, so, accordingly, the process of thinking has become shamefully simplified. But I’ve decided to give up. In my latest book, there are few photographs and hardly any documents. The word is there to fight for its rite of passage.

[From an interview with Dustin Illingworth in The Paris Review]

Kurt Franz was an actual Nazi, Haya Tedesci is largely the creation of Drndić, although based in part on a real person. This borrowing of parts of another person’s life led to a controversy after Maclehose Press released the first English translation (by Ellen Elias-Bursać) of Trieste in 2012. In an interview, Drndić described how she developed the character of Haya:

There are these Internet pages where you have stories of victims of the Holocaust, the survivors, their families. And among these web pages I found some kind of confession by a man from a family in Italy. This novel is settled in Northern Italy and part of Slovenia, that was then called Adriatische Kusterland. This family survived because some of the members joined the fascist party of Mussolini, they had the fascist party’s membership cards. They were Jews, of course. They were transferred to Albania, when the fascists conquered the country. And it was very pathetic, it made me angry, this story did not fit, they were not victims of the Holocaust. OK, they found a way to survive, but it was not fair to have this pathetic little story among these horrible stories of survivors. And I said, aha, now I am going to write a book about this. And I made one of the members of this family have a relationship with an existing SS officer, which was an invention. I had a lot of complications with that book, because some of the members were alive and they came to the promotion, in Great Britain. So, anyway, I had her have a relationship with an SS officer, who died, and they had a son. It was at this point that I introduced the relatively unknown or recently uncovered story about the Lebensborn, the children who were stolen from Eastern Europe in order to be educated as Aryans, because not enough Aryans were being born, so 250.000 were stolen and educated as Germans.

One of those “Internet pages” that Drndić read was the story “My Mother’s Autobiography,” Frank J. Gent’s brief biography of his mother, Fulvia Liliana Schiff, written for a extensive family-run genealogy website. (Gent also published the same piece in 1996 as an Amazon Kindle edition called Trieste: The True Story). When Drndić read this she obviously lit upon the the moment when Gent describes Fulvia’s sister being surrounded by Italian partisans who were looking for Germans and German sympathizers: “I was fortunate; I was carrying in my pocket membership of the Fascist Republic of Saló. If they had found that I doubt I would have survived.” When the Schiff family found out about Drndić’s use of Fulvia’s life story, they were outraged. Drndić eventually conceded that she had borrowed from Gent’s story.  The controversy is detailed over at Gogol’s Overcoat. (Make sure to read the comments, which includes Drndić’s reply and justification. As a result of the family’s complaint, the American edition (Houghton Mifflin, 2014) of Trieste bears this statement on the copyright page:

The early life of Haya Tedeschi is based upon an account by Frank Gent of the life of Fulvia Schiff and her family (“My Mother’s Story,” 1996). The affair with an S.S. officer and the subsequent birth of a son are fiction. In reality the Schiffs fled from Sicily to Albania in 1938, and lived there for six years, when they returned to Italy via Yugoslavia, Hungary, and Austria. Fulvia met a British soldier, Frank Dennis Gent, in Milan in 1945. She return with him to England—where they still live—married, and had six children.

Perhaps not surprisingly, “My Mother’s Autobiography” no longer includes the reference to membership card of the Fascist Republic of Saló, although it remains in the Kindle version.