Posts from the ‘David Crystal’ Category

The inspiration for this book came from reading W.G. Sebald’s The Rings of Saturn, an atmospheric semi-fictional account of a walking tour throughout East Anglia, in which personal reflections, historical allusions, and traveller observations randomly combine into a mesmerizing novel about change, memory, oblivion, and survival…I was frequently reminded of the serendipitous nature of language study, when reading that book.

So begins By Hook or By Crook: A Journey in Search of English (London: HarperCollins, 2007) by the eminent linguist David Crystal. Crystal leads the reader on a much-too-fun-to-be-educational meander across the highways and byways of the UK (with a brief stopover in the US), letting us in on his thoughts as he ponders the use, mis-use and history of the English language. Like Sebald, Crystal moves seamlessly between a multitude of subjects and disciplines, including English history, famous film locations, the cult TV series The Prisoner, 19th century bridge building techniques, pub signs, the dialects of bee language, absent-mindedness, elocution, place names, Lewis Carroll – well, you get it. Booklovers will enjoy his visit to the great book town of Hay.

Because I am a compulsive deconstructionist of blurbs, I was grateful that Crystal clued me in on the origin of the term.According to him a publisher proposed (unsuccessfully, apparently) to make the 1907 book Are You a Bromide? more appealing by putting an image of an attractive female on the front cover. His name for this female? Miss Belinda Bromide. And speaking of blurbs, HarperCollins took the easy way out on By Hook or By Crook by plastering the back cover with blurbs to one of Crystal’s earlier books.I suppose they were thinking that with blurbs by Philip Pullman and J.M. Coetzee, why work any harder? 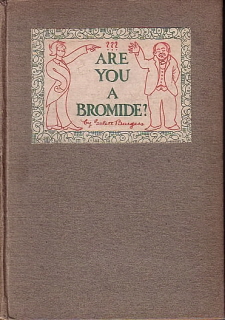 I do hope HarperCollins decides to release By Hook or By Crook in the US, but I suggest adding a roadmap…

I had to make a decision after Trawsfynydd. Should I turn east and cut across through Bala toward Welshpool? Or should I keep going on the A-470 south through Dolgellau and on toward Builth Wells?

Time for a coin toss.

One other point of inspiration that Crystal seems to have absorbed from Sebald is the use of photographs. By Hook of By Crook is peppered with two dozen snapshots that add to the sensation that the reader is sitting in the passenger seat while Crystal steers and rattles on. Most of the time I didn’t know or care where we were, but it was always a pleasure to be at Crystal’s side.