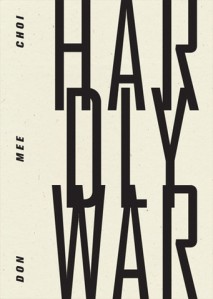 I was narrowly narrator,

In an essay several years ago for the British magazine Source Photographic Review, I wrote: “if one were to look for the most innovative and challenging uses of photography in literature today, I would point to a handful of contemporary poets who are finding ways to turn visual images into poetic vocabulary, notably Anne Carson, Christian Hawkey, Susan Howe, and Leslie Scalapino.” Today, I would add a number of names to that list, one of which is Don Mee Choi, whose new book of poems and photographs Hardly War (Seattle & NY: Wave Books, 2016) I have been reading and rereading for a week now. Choi pulls off quite a feat by blending several languages, photographs, and drawings into a unified whole. She has a distinctive voice that is playful and confident, and Wave Books, as always, has produced a brilliant design that turns Hardly War into a bravura visual performance on paper. Choi was born in South Korea and her father was a photographer and cinematographer who mostly worked in Asian war zones – including the Korean War and the Vietnam War and she deploys photographs by her father and others in this book.

What I am attempting to do with my poems and my father’s photographs is what I used to do as a child when I stared at my father’s photographs and maps. I’m trying to imagine race=nation,its language, its wars. I am trying to fold race into geopolitics. It involves disobeying history, severing its ties to power. It strings together the faintly remembered, the faintly imagined, the faintly discarded, which is to say race=nation gets to speak its own faint history in its own faint language. Its mere umbilical cord is hardly attached to anything at all. Hence, hardly=war. 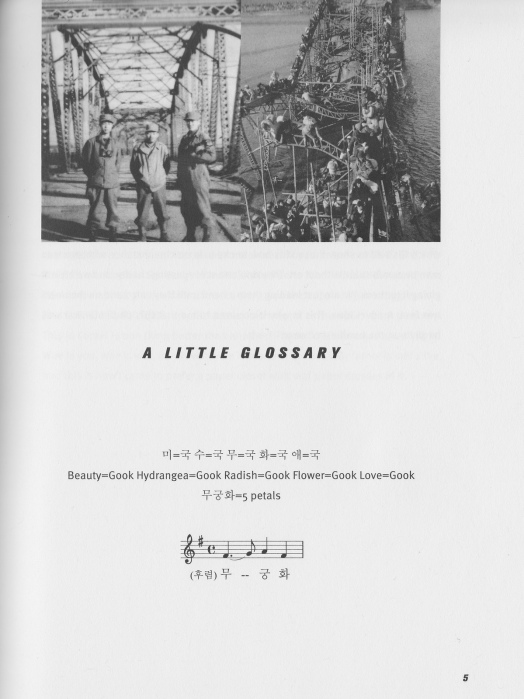 This the opening page of the poetry, which immediately follows a brief, mostly autobiographical introduction by Choi called “Race=Nation.” Beginning the book with a glossary feels like a sly joke on books with highly technical terms or many foreign words. The paired photographs show the Taedong River Bridge in Pyongyang, Korea in November 1950 (left) and December 1950 (right), before and after its destruction.  Choi’s father, with a camera around his neck, is on the left. On this page, Choi carefully and succinctly sets up the key devices that will appear throughout the book: pluralingualism, uncertain equivalencies, and repetition (of images, symbols, and words).

Hardly War is pluralingual, employing English (as the primary language) and Korean, as well as the languages of mathematics and music, photography and drawing. Presumably, the visual images are also the most universal of the languages, since many readers will not know both English and Korean and certainly some readers will not be able to read music. So most readers will find that Choi uses language as both a means and a barrier to communication. 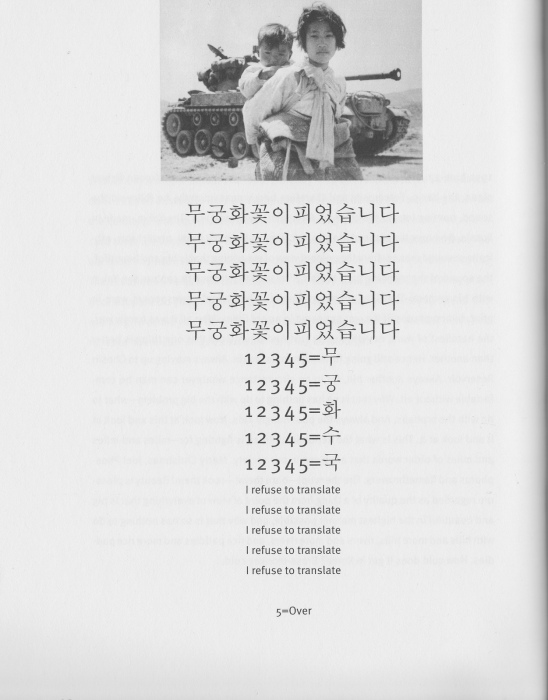 Here, Choi builds a kind of unstable linguistic pedestal for the image of the two people and the tank. In her Notes, Choi explains that this photograph is from the U.S. National Archives and shows a young girl carrying her brother in front of an M-26 tank. Choi frequently uses the equal sign, but always in a way that simultaneously suggests and undermines a sense of equivalency between the two sides of the equation. The number 5 occurs several times in the book, often referring to the five petals of the Rose of Sharon, which is the national flower of South Korea.

Readers who are bilingual in Korean and English will undoubtedly read Hardly War very differently than readers like me who know only one of the languages. Choi openly acknowledges that monolingual English readers will be missing something (“I refuse to translate”), but I think that incomprehension – the first step toward the creation and demonization of the Other – is an intentional part of Choi’s writing in Hardly War. In her Introduction, Choi writes: “This is how gook=nation was born. Our race, our national identity, even our clothing became racialized and geopoliticized within the global class war. Therefore, when I was born in the tiny, tile-roofed house, I was already geopolitically raced. Hence, me=gook.”

Warmly greeted one another

(from the poem “Hydrangea Agenda”) 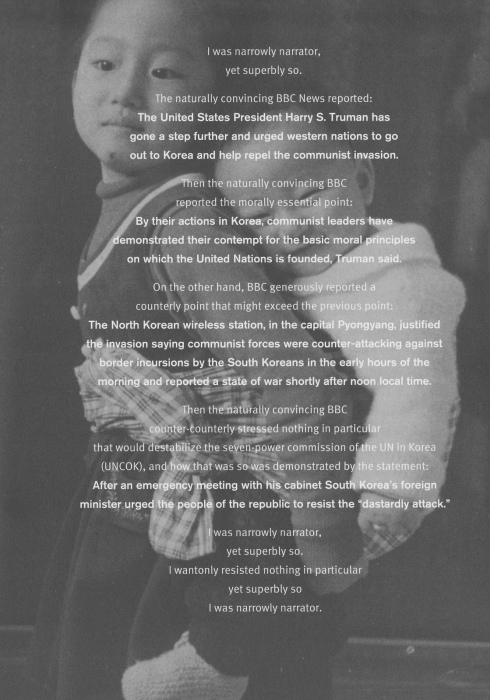 This page appears three pages after the one I showed previously. The image of a young woman carrying her brother on her back (this time a photograph taken by Choi’s father) serves as a rhyming image for the previous photograph.

The register of Choi’s English voice shifts dramatically throughout the book. There are sections written in the simple, awkward voice of a small child or of a foreigner who speaks a kind of pidgin English. This voice sometimes seems to be playing with the stereotype of the submissive foreigner. Other sections are written in the pseudo-factual voice of a journalist or newsreel narrator, while others – which deal with military topics like the bombs and herbicides (napalm, DDT) dropped over Korea from the air – are written in an almost neutral, scientific voice.

But the most consistent aspect of Hardly War is Choi’s peculiar sense of humor. She borrows wordplay tactics from nursery rhymes and other forms of children’s poetry to give her writing a slightly sinister innocence. (“I was cheerily cherrily red and merely merrily washed my face in the yard and looked up at the stars. I decided to go alone as far as I could go south, do and do and to.”) And she creates a strange mashup of American and Korean cultures, as in the short poem “A Little Menu,” which is simply a list of food items that includes “Wieners,” “Pan-fried Spam with kimchi,” and: 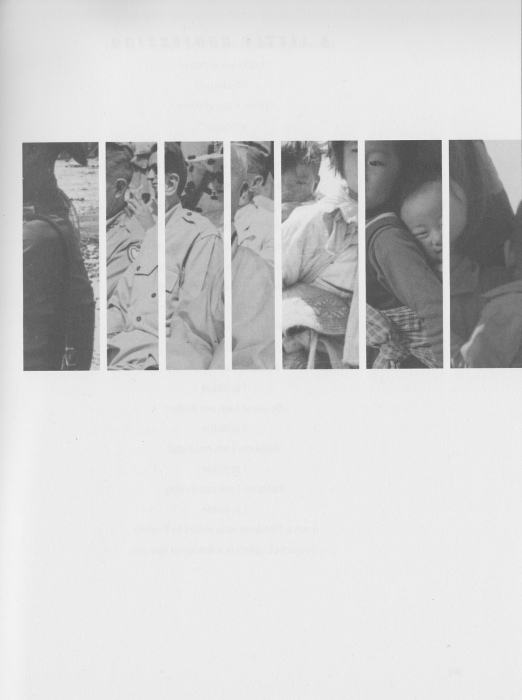 The page with the seven photo-segments is opposite “Suicide Parade,” a poem about the use of napalm. This hauntingly rhythmic parade of images serves as a visual refrain, recapitulating images that have all appeared in the previous pages. The images (and the people they depict) are fragmented and partially reassembled. but, significantly, fail to make a whole new person. This image made me thing of the futility of putting Humpty Dumpty back together again after he falls off the all. 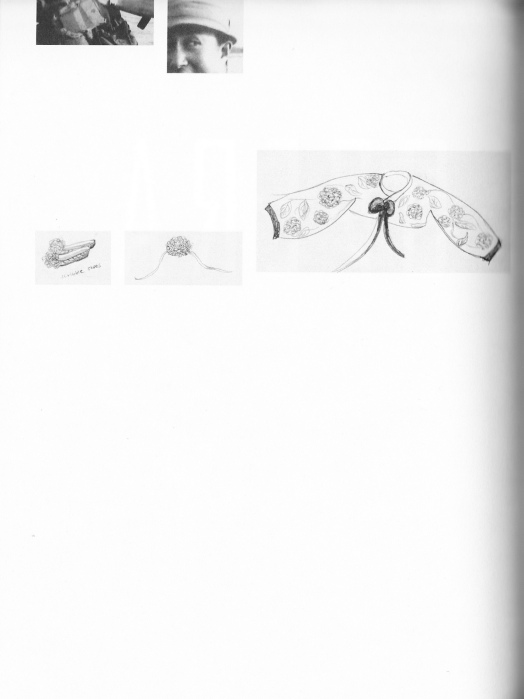 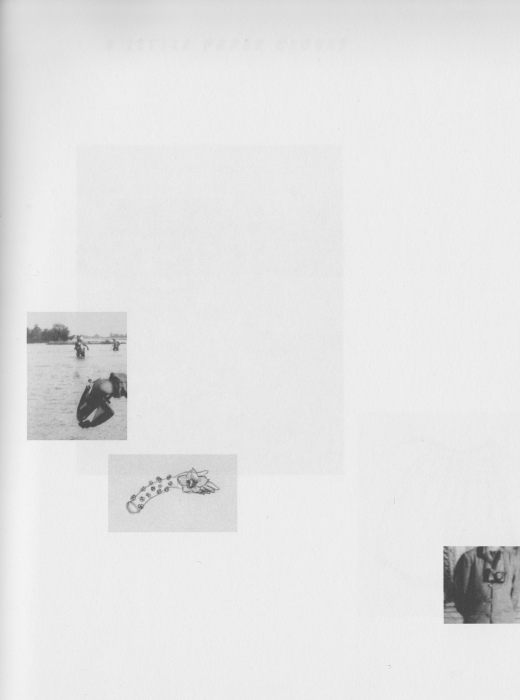 Much of Hardly War shifts between traditionally formatted poems and prose poems, but the book ends with a section some forty pages long called “Hardly Opera,” which is written in the form of a libretto for many characters (many of which are flowers), complete with stage directions. The main character in the opera is her father’s Leica Elmar camera. In the three pages of carefully and lyrically placed photographs and drawings that precede this section (two are shown above), Choi gives us a visual poem which contrasts the articles of military-like clothing that her father wore as a combat photographer and the delicate drawings of flower-decorated clothing that Choi made as a child while he was away on assignment. Choi writes:

The photos and drawings are meant to be a key to “Hardly Opera,” or that is how it functioned for me as I was writing it. While my father was in Vietnam, I was busy drawing and scribbling, making outfits for my paper dolls and pretending to write in English.

Check out the excellent review of Hardly War by Rich Smith over at Seattle’s alternative arts & culture newspaper The Stranger.