Posts from the ‘Eduard Mörike’ Category

Reading the third essay in W.G. Sebald’s A Place in the Country, “Why I grieve I do not know: A memento of Mörike,” one gets the distinct sense that Sebald is struggling to say something kind about Eduard Mörike (1804-1875), a Lutheran minister and writer who scarcely traveled and whose writing often dissolved into “melodrama” and “something precariously close to a better class of sensationalist romance.”

Sebald saw Mörike as part of a generation “preparing to enter upon the becalmed waters of the Biedermeier age, in which bourgeois domesticity takes precedence over public life.”  By the time that Mörike was a student, the French Revolution had “receded into a legendary and distant past” and the Napoleonic era was merely “part of the dawning consciousness” of Mörike’s own time.  Eventually, however, Sebald decides that Mörike is not unlike the composer Franz Schubert (1797-1828).  For Sebald, “the most masterful strikes of genius are most readily to be found in the hidden shifts of [Schubert’s] chamber music” just as he finds the best of Mörike in some of his poems, not in his more ambitious works.  “Mörike and Schubert, Keller and Walser, have bequeathed to us some few of the most beautiful lines ever written.”

If Sebald’s lukewarm essay on Mörike seems slightly out of tune with the other essays in A Place in the Country, there is a reason.  The piece was written for the occasion on which Sebald received the Mörike-Preis der Stadt Fellbach at a ceremony on April 22, 1997, in Baden-Württemburg.  Delivering a speech that somehow touches upon Mörike seems to be part of the expectation of the winner of this triennial prize and Sebald obliging did so.

Incidentally, in 2000, the Mörike-Preis published a handsome volume reproducing all of the speeches, papers, and readings that occurred at the prize ceremonies for the years 1991, 1994, 1997, and 2000. 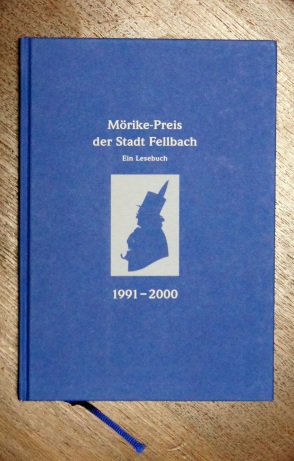 All of my posts on A Place in the Country (Logis in einem Landhaus) can be found here.