Posts from the ‘Forrest Gander’ Category 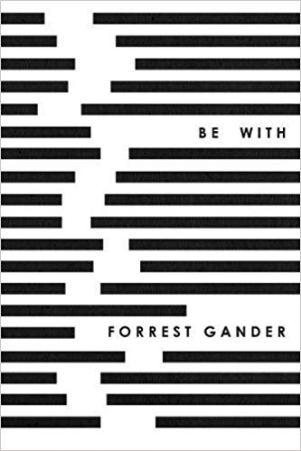 I been moving back and forth between three books by Forrest Gander recently, looking mostly at the various ways in which he has worked with photographs in his poetry. In Core Samples from the World (New Directions, 2011) there are four poem sequences in which photographs by Raymond Meeks, Graciela Iturbide, and Lucas Foglia are situated. The photographs are each given their own page, so they aren’t really embedded within the text of the poem. Instead, Gander seems to propose that the reader take in the photographs as a visual parallel to his words. Separate but equal. An earlier book, Eye Against Eye (New Directions, 2005), includes a poem sequence entitled “Late Summer Entry: the  Landscapes of Sally Mann,” in which Gander’s poems directly address their visual counterparts on facing pages.

Gander’s newest book, Be With (New Directions, 2018), is riddled with the “searing exquisite singularity” of death. In 2016, his wife, the poet C.D. Wright, died suddenly, and a number of the book’s poems deal with the “grief-sounds” and the “tetric silence” that he experienced after this loss. There is also a long, moving, deeply personal poem titled “Ruth,” about Gander’s aging, failing mother, who struggles physically and has memory issues. His response to familial grief is to write poems that are fractured and disjointed, that abruptly change direction, and have what he calls a “rhythm of farewell.”

For me, the most fascinating work in Be With is the closing poem sequence titled “Littoral Zone” in which Gander presents a combination of words and photographs in a new and more complex relationship than he has previously attempted. “Littoral Zone” has six parts, each consisting of a photograph by Michael Flomen on the left hand page and one section of Gander’s poem on the opposing page. The six sections have subtitles that alternate between “Entrance” and “Exit,” suggesting that the poem as a whole represents the influx and the ebb of the tide that is hinted at by the title word littoral, which, Merriam-Webster.com tells me, is “the shore zone between the high tide and low tide points.” Each of the six written sections of the poem is subdivided into three verse paragraphs, with the center one printed in italics. 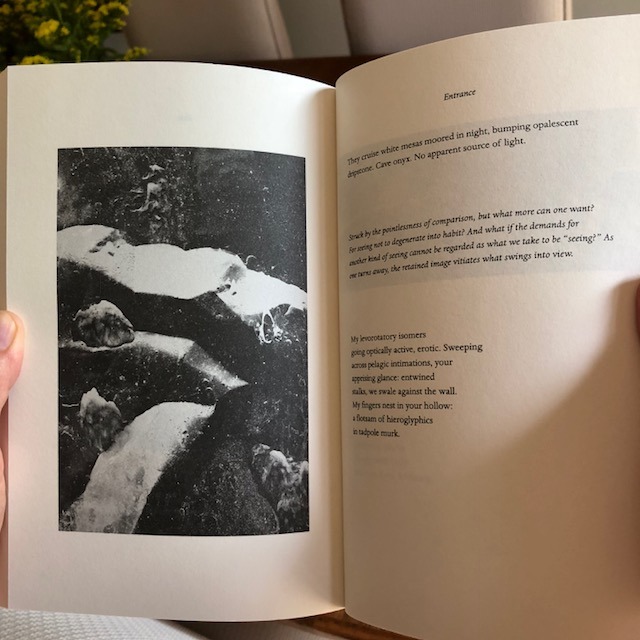 There’s a further pattern to these six sections, as I’ll show using the example of the third and final “Exit” section of the poem sequence. The first verse paragraph is essentially an attempt to provide a verbal equivalent for what is visible in the photograph.

Mobbed phosphorescence, gaseous swarm. And breathbeats blazed into an invisible integument. To begin in intimacy on this volcanic tuff. Here to cling.

For though we have no criterion for how to see and are not sure what we are seeing, we are plunged into sensation. As into a novel ache. But what ever has dispassionate description delivered?

And the final verse paragraph shifts into the zone of erotics, with the poet intimately addressing a lover.

Your impact marks
throng the resin
of my mind. Declension
a focal spasm. When your
eyelids release their tension,
nocturnal pods, in-
vertebrate and
membranous, surge
into my dreams. From
afar, do you see me now
briefly here in this phantasmic
standoff riding
pain’s whirlforms?

Gander is poet who is not afraid to cause readers to consult their dictionaries once in a while, but “Littoral Zone” is chock full of specialized terms. (Hands up if you know the definitions of  “pelagic” or “lampyrid” or “levorotatory isomers,” for example.) I think Gander is both insisting on the highest level of precision he can attain and also reveling in wonderful terminology from disciplines that most of us don’t bump up against on a daily basis. I immediately thought of the way in which writer Robert Macfarlane introduces us to the lost or unfamiliar vocabularies of nature when he tweets his “word of the day”.

Flomen’s black-and-white images are about as abstract as something can be that is still recognizable as a photograph. In fact, they are cameraless photograms that Flomen makes using only sheets of photographic paper, moonlight, and whatever he can find in forests or streams, including grass, branches, snow, rocks. He made these images by plunging unexposed photographic paper into a stream or pond and letting water and more solid objects like grasses and pebbles create the images directly on the paper. In other words, nature is literally creating a photographic image of itself. (For more on Michael Flomen’s photographs, check out this video on Vimeo or his new website, where twelve photographs from his “Littoral Zone” project can be found by clicking on “Series”.)

No matter how many times I read “Littoral Zone” it remains elusive and impossible to grasp as a whole. It’s a poem about the difficulty of knowing and the complex relationship between seeing and saying. I think the challenge he faced when confronted by the abstraction of Flomen’s photographs, knowing that they represent nature in its purest form, seems to have freed Gander. There is barely a hint of narrative to be found in Flomen’s stark images of light and darkness; therefore Gander’s poetic response could be, well, anything at all. And what he chose to do was go “optically active.” He riffs off Flomen’s images to create his own intimate landscapes and bodyscapes.

Struck by the pointlessness of comparison, but what more can one want?
For seeing not to degenerate into habit? And what if the demands for
another kind of seeing cannot be regarded as what we take to be “seeing”? As
one turns away, the retained image vitiates what swings into view.

In his Acknowledgements, Gander tells us that the sections of “Littoral Zone” were published individually “in earlier drafts” online in alligatorzine. The poems that appear in Be With have been pared down, made even more angular and abstract than their earlier versions. In several cases they have been almost entirely reworked. Here’s the original version of the poem I quoted above, which Gander previously titled “Littoral Zone 19,” and which was 18 words longer when first published:

But though we have no criterion for how to see and are not sure what we are seeing, we are plunged into sensation. As into a novel pain. And yet pointing to it yields no shred of information.

The privilege of intimacy, a
kind of blackmail, would
face it out, the bally show
glimmerous as a trinket ring
to fetch code in the night
quarter and smell of lavender
may be partly regarded as a sinkhole
where strange laxities prevail on
the strength of what is
going to take place there.

I haven’t said much about the rest of Be With, but Dan Chaisson’s review in a recent issue of The New Yorker nails it.