Posts from the ‘Frank Auerbach’ Category

When W.G. Sebald’s Ausgewanderten (1991) was translated and published as The Emigrants in England, the new 1996 version came with a renamed fourth chapter and two fewer photographs. The chapter that was originally called Max Aurach in the German edition became Max Ferber in English. As Maya Jaggi recounts in Recovered Memories, an interview-based article in The Guardian September 22, 2001, one of the two sources for the character Max Aurach was the English painter Frank Auerbach, who apparently did not want to be so closely identified with the book now that it was coming out in English. And so the character’s last name was changed from Aurach to Ferber and Auerbach’s painting, which had appeared on page 240 of the German book, was removed. Jaggi writes:

He [Sebald] is conscious of the danger of usurping others’ existences. While all four emigrants are based on real people, the painter Max Ferber, who obsessively scratches out then redoes his work, is a composite of Sebald’s Mancunian landlord (“I found out he’d skiied in the same places as I had”) and the London-based artist Frank Auerbach. Without naming Auerbach, Sebald says he felt he had the right – “because the information on his manner of work is from a published source”. Auerbach, however, refused to allow his paintings to appear in the English edition. Sebald modified the character’s name from Max Aurach in the German. “I withdraw if I get any sense of the person’s discomfort,” he says.

The second photograph that was removed is a close-up of a man’s face, and, given its placement in the text where the narrator of The Emigrants recognizes a painting by “Ferber”an exhibition catalog from the Tate Gallery, it seems safe to say the face probably belongs to one of the two sources for Ferber – either Auerbach or Sebald’s landlord from his Manchester days.

I studied Ferber’s dark eye, looking sideways out of a photograph that accompanied the text, and tried, at least with hindsight, to understand what inhibitions or wariness there had been on his part that had kept our conversations away from his origins… (page 178 of the American edition)

In creating Max Aurach/Ferber, Sebald also transplanted Auerbach from his adopted London to Manchester. In the book, Ferber says:

Manchester has taken possession of me for good. I cannot leave. I do not want to leave. I must not. Even the visits I have to make to London once or twice a year oppress and upset me. (page 169)

Not only did Sebald relocate Auerbach to Manchester, he transfered his allegiance to London onto Manchester. Earlier this year the Economist.com (February 3, 2007), reported on Auerbach’s dislike for leaving London:

“I HATE leaving my studio. I hate leaving Camden Town. I hate leaving London.” So speaks Frank Auerbach, a German-born artist who came to London from Berlin as a boy on the eve of the second world war, and whose parents died in the Holocaust. Mr Auerbach reckons he hasn’t spent more than four weeks away from his adopted home since he was seven.

By the way, the photograph of Aurach’s eye which goes missing in English-language editions, foreshadows by more than decade Sebald’s book of poems Unerzählt (Unrecounted), in which each poem is accompanied by an illustration showing only the eyes of a person. It also set the stage for the cover photograph used for the British edition of Vertigo (Harvill, 1999).

[The eyes of Javier Marias, from Unrecounted] 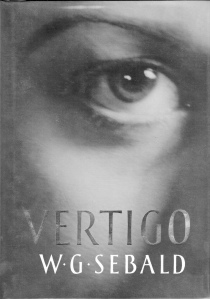