Posts from the ‘Gustave Flaubert’ Category 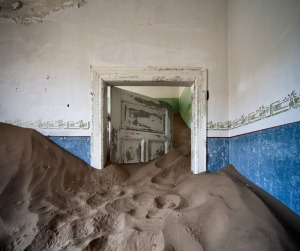 Here is a summer-themed post for all of those Vertigo readers who might find themselves on a beach in the coming months, trying to eject a few grains of sand from in between the toes.

On the opening page of The Rings of Saturn, W.G. Sebald’s narrator reflects briefly upon the walk through the county of Suffolk which he is about to relate to us in the remainder of the book.

In retrospect I became preoccupied not only with the unaccustomed sense of freedom but also with the paralysing horror that had overcome me at times with the traces of destruction, reaching far back into the past, that were evident even in that remote place.

As the book evolves, Sebald’s narrator encounters two distinct types of destruction: those caused as a result of war and other human follies and those caused by nature itself. Nature, it would appear, is the ultimate destructive force. No matter what we humans might do to each other and to our landscape, the power of nature is more destructive, more inescapable, more random.

A few pages into the book,we find the narrator eulogizing Janine Dakyns, a friend and Flaubert scholar who had died unexpectedly and rather young in 1994. It is here that sand is used for the first time in the book as a trope for nature’s unstoppable power.

Janine maintained that the source of Flaubert’s scruples was to be found in the relentless spread of stupidity which he had observed everywhere, and which he believed had already invaded his own head. It was (so supposedly once he said) as if one were sinking into sand. This was probably the reason, she said, that sand possessed such significance in all of Flaubert’s works. Sand conquered all. Time and time again, said Janine, vast dust clouds drifted through Flaubert’s dreams by day and by night, raised over the arid plains of the African continent and moving north across the Mediterranean and the Iberian peninsula until sooner or later they settled like ash from a fire on a Tuilleries garden, a suburb of Rouen or a country town in Normandy, penetrating into the tiniest of crevices. In a grain of sand in the hem of Emma Bovary’s dress, said Janine, Flaubert saw the whole of the Sahara. For him, every speck of dust weighed as heavy as the Atlas mountains

Later on, the narrator of The Rings approaches the town of Dunwich.

[Much of the city] has gone under, quite literally, and is now below the sea, beneath alluvial sand and gravel, over an area of two or three square miles. The parish churches of St James, St Leonard, St Martin, St Bartholomew, St Michael, St Patrick, St Mary, St John, St Peter, St Nicholas and St Felix, one after the other, toppled down the steadily receding cliff-face and sank into the depth…

Even the saints, it seems, are powerless against sand and the sea.

Finally, as the narrator begins to approach Orfordness, the potential for human self-destruction and nature’s self destruction come together in a single place.

Time and again, as one walks across the wide plains, one passes barracks, gateways and fenced-off areas where, behind thin plantations of Scots pines, weapons are concealed in camouflaged hangars and grass-covered bunkers, the weapons with which, if an emergency should arise, whole countries and continents can be transformed into smoking heaps of stone and ash in no time. Not far from Orford, and already tired from my long walk, this notion took possession of me when I was hit by a sandstorm. I was approaching the eastern fringe of Rendlesham Forest, which covers several square miles and was for the most part reduced to broken and splintered timber in the terrible hurricane of the 16th of October 1987. Suddenly, in the space of a few minutes, the bright sky darkened and a wind came up, blowing the dust across the arid land in sinister spirals. The last flickering remnants of daylight were being extinguished and all contours disappeared in the greyish-brown, smothering gloom that was soon lashed by strong, unrelenting gusts. I crouched behind a rampart of tree stumps that had been bulldozed into  long lines after the great hurricane. As darkness closed in from the horizon like a noose being tightened, I tried in vain to make out, through the swirling and ever denser obscurement, landmarks that a short while ago stood out clearly, but with each passing moment the space around became more constricted. Even in my immediate vicinity I soon could not distinguish any line or shape at all. The mealy dust streamed from left to right, to and fro on every side, rising on high and powdering down, nothing but a dancing rainy whirl for what must have been an hour, while further inland, as I later learnt, a heavy thunderstorm had broken. Gasping for breath, my mouth and throat dry, I crawled out of the hollow that had formed around me like the last survivor of a caravan that had come to grief in the desert. A deathly silence prevailed. There was not a breath, not a birdsong to be heard, not a rustle, nothing. And although it now grew lighter once more, the sun, which was at its zenith, remained hidden behind the banners of pollen-fine dust that hung for a long time in the air. This, I thought, will be what is left after the earth has ground itself down.