Posts from the ‘Ivan Vladislavić’ Category 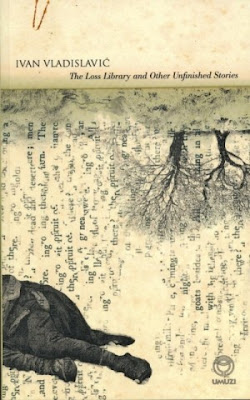 The most compelling motive for including a photograph in a fiction is to discount it. There are forty-four plates in André Breton’s Nadja and not one of them clarifies a thing. The snaps from Koos Prinsloo’s family album seem more unreal, more obviously made up than his fictions. In Sebald, the images are cut down to size and drained of authority. They are always less than or more than illustrative; they do not live up to the text or they carry an excess that demands an explanation. Their purpose is less to define than to disrupt, to create ripples and falls in the beguiling flow of the prose. They are pebbles and weirs.

So writes Ivan Vladislavić in his book The Loss Library and Other Unfinished Stories (Seagull Books, 2012). It’s a fragment from his notebooks, written in 2003. Vladislavić is right. Photographs (and here, I imagine,we can safely substitute the term “images”) that are placed within a literary text – even those images that are essentially illustrative – disrupt our flow and force the reading brain to process, puzzle, recalibrate, accommodate. But don’t these terms also describe how we read most literary texts even thought they are purely textual? We all know texts in which every chapter, every paragraph, sometimes every sentence forces us to essentially rethink the entire book up to that point. In fact, I think it can be argued that one aspect of literature – perhaps especially of poetry – is that the text continually disrupts itself. So the real question, it seems to me, is whether images disrupt texts differently.

Elsewhere in the book, Vladislavić asks himself the question “Is it fair to weave fictions out of the lives of real people?” Of course it is, he decides.

How else are fictions to be made? All fiction is the factual refracted. Is the degree of refraction, that is, the extent to which the factual is distorted, the mark of accomplishment?

Here, I think, is a clue to how we ought to think about the disruption of images. There is a spectrum of disruptability. It’s all a matter of degree. There are purely illustrative images that we glance at, nod in recognition, and return to our reading relatively unimpeded. At the other end, though, are the images that stop us cold, images that seem to be non sequiturs relative to the text we have just read. Here, the effort required of the reader rises accordingly and even the most momentary disruption can be massive.

There’s a second assumption buried in the opening quote from Vladislavić, namely that the inclusion of a photograph within a text serves to “discount” the photograph, but not the text. I think this can only be true if the photographs are considered minor players, secondary to the text. But this makes me want to ask: don’t most writers use photographs in a way that makes them secondary to the text in some way? Elsewhere, James Elkins wonders what the reaction would be to Sebald’s books if they had been published without images. It’s easy to imagine reading all of Sebald’s books without images. Clearly there would be some sort of loss, although it can be difficult to describe precisely what would be missing. On the other hand, I don’t think a reader would get much out of his books if we did the reverse and eliminated all of the text. What would a literary work look like that absolutely could not afford to lose either its imagery or its text?

The Loss Library is a collection of story ideas that Vladislavić “could not write, or started to write and could not finish.” In some cases, he discusses why the stories have remained incomplete for years, often digressing beyond the process of writing into literary and personal matters. Vladislavić is candid about the doubts, dead ends, and interminable questions that arise as a piece of fiction develops. For example, as he fiddles with ideas for a story based on an expedition to the island of Komodo in 1926, he decides: “The past is a sitting duck. Bringing it home for the pot does a writer no credit.” The Loss Library is not exactly a series of case studies, although several chapters amount to a postmortem on the reasons the germ of a story failed to sprout. The book is more of a self-inquisition about the ways in which the author’s motivations, inspirations, and perceptions change, sometimes under the influence of the historical periods he has lived through. As such, it’s generous, enjoyable, and thought-provoking.

Every chapter in The Loss Library begins with a collage created by Sunandini Banerjee, each beautifully printed on glossy paper and tipped onto the book pages. Strictly speaking, I don’t think of them as “embedded” images since they were commissioned by the publisher. In an interview in The White Review #5 (2012), Vladislavić explains:

my two most recent books, The Loss Library and A Labour of Moles, were both illustrated after the fact. I knew from the outset that A Labour of Moles would be illustrated, but The Loss Library was not conceived that way. There are some detailed descriptions of images in this text and including them would have defeated the object. The idea of illustrating the book came from the designer, Sunandini Banerjee, and I like the works she made very much.

Banerjee’s collages consist of various types of images combined with text fragments. In each, the images and texts collide, partially obscuring the image and causing the text to disintegrate. All of which seems a perfect metaphor for the ways in which texts and images disrupt each other. Here is the image that accompanies “The Last Walk,” a story idea generated by seeing the photograph of writer Robert Walser’s body lying in the snow.