Posts from the ‘James Elkins’ Category 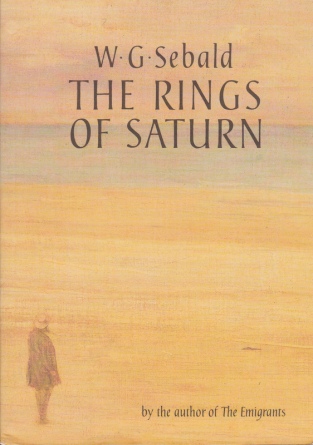 W.G. Sebald’s book The Rings of Saturn gets some attention from non-literary disciplines in two recent posts elsewhere. Over at Celluloid Wicker Man, Adam Scovell has written about Grant Gee’s film Patience (After Sebald). He gives a thoughtful examination to the relationship between Sebald’s book and Gee’s film, especially the way in which the film and the book attempt to capture perception.

There are a number of reception possibilities attainable when watching Grant Gee’s 2011 essay film, Patience (After Sebald). Any film based on a book or around an author is always going to separate its viewers into two groups; those who have read the original source material and those who have not. While the latter will be seeking to latch onto the their initial experience of film as it happens, the former will be no doubt be cast in the inescapable lure of the original book and its contexts.

For a writer who is at once both extremely modern in his style but shot through with the prism of a classical antiquarian, the 16mm film perhaps is the most aesthetically pleasing and apt model left to us when exploring the writing of W.G. Sebald. Like his writing, it is just as littered with scratches, grooves and imperfections that make it both a leaping jump towards recreating perception and something deeply humanistic to experience.

Meanwhile, as part of his ongoing project Writing With Images (which I wrote about recently), art historian James Elkins has added a lengthy analysis of the images in The Rings of Saturn. Elkins writes about three specific photographs and ponders the “epistemological veracity of his images in this book, which are often manipulated and difficult to read.”

Elkins adds a fresh perspective on the different kinds of photographic imagery that Sebald uses and how images and text relate to each other in Rings. One of the advantages that Elkins brings to the table is his extraordinary breadth of research into text/image relationships and the underlying assumptions with which various academic and artistic disciplines articulate those relationships.

Here is just a small excerpt from Elkin’s mini-essay:

…there is a double claim in the secondary literature: on the one hand, the more nearly illegible photographs make us question their veracity (“we are forced to renegotiate our contract with the photograph’s… agreed-upon ability to represent the world”); and on the other, that questioning both requires us to read them as manipulated objects (and attend to “the disorienting ‘affect of the Real’”), and also is made possible by our awareness that they are manipulated objects. This double claim sets in motion a particular kind of reading. We are aware of the manipulation and choice of photographs, and therefore we think about the photographs’ inadequacy; we see the inadequacy, and so we notice more of Sebald’s manipulations and choices. We also begin to read differently: instead of reading through the book, as the narrative asks us to do, we tend to examine the book, reading back and forth. Because the images of beaches, bridges, marshes, and rivers are often “maddeningly similar” and nearly free of content, we tend to thumb back and forth, looking at their placement on the page, “the degree or type of bleed,” or some other clue about their ordering: in other words, we begin to look at the images both for their traces of veracity (the first point) and their degree of manipulation, self-similarity, ordering, and formatting (the second point).

The Rings of Saturn includes some of Sebald’s most concerted experiments in undermining the veridical, evidentiary function of photographs and drawing attention to their damaged, degraded, manipulated state. As such it has been very influential: books from Tan Lin’s Seven Controlled Vocabularies to Jesse Ball’s Silence Once Begun pursue the strategies Sebald initiated in Rings of Saturn. Photographs with minimal, indifferent, or illegible content are reproduced badly, in low contrast, without detail, or with signs of age. It is an aesthetic of the careless, the inexpert, and the everyday, but also the hopeless, the disillusioned, the pessimistic. It is as if the world cannot be well represented by photographs, and yet photographs have to be curated, manipulated, and antiqued in order to demonstrate their inadequacy. The practice therefore involves a false nostalgia, because photographs have to be manipulated and printed in a certain way in order to express a property that is implied to be inherent in photography in general. 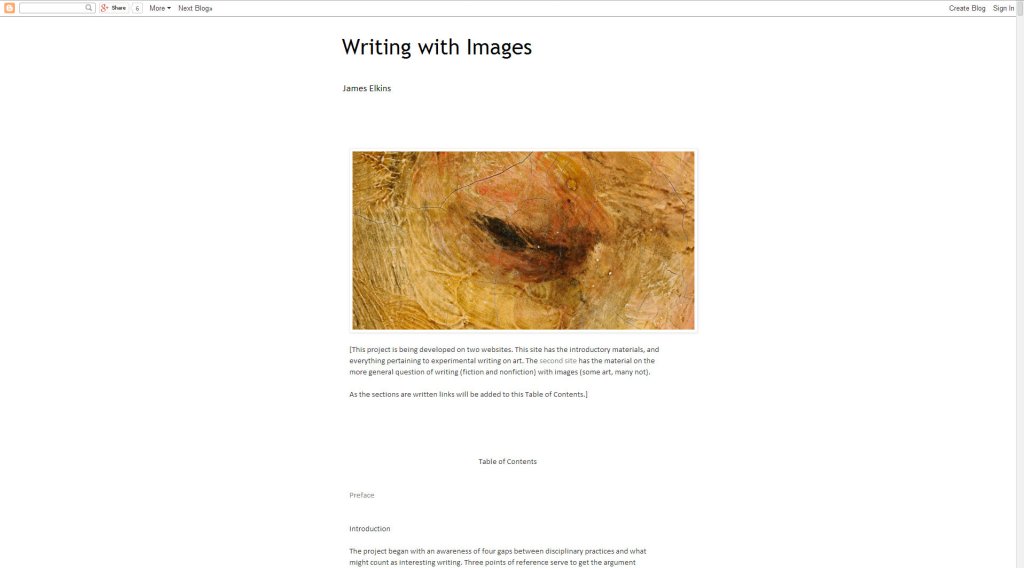 Art historian James Elkins is engaged in an extensive study on the practice of writing with images, and he is doing this in a very public way by posting drafts of chapters on two blogs and using his Facebook account to solicit ideas and get feedback. It’s a form of live writing with a touch of crowdsourcing thrown in. At his first blog, Writing with Images, Elkins describes his overall project like this:

I have been exploring the history, theory, and possibilities of writing with images. By “writing” I mean fiction (modernist, experimental, conceptual, unclassifiable) and nonfiction (including some art history, art criticism, cultural criticism, visual studies, and art theory). By “images” I mean principally photographs (but also charts, diagrams, maps, photocopies, and other graphics) and sometimes drawings and paintings.

That blog serves as an outline and a guide to the first part of Elkins’ research, where he defines terms, sets out some ground rules for his approach, then addresses a number of areas, including: Writing on Art, Writing and Visual Studies, The Space Between Interesting Writing and Art Theory, Texts as Images, What Is an Essay?, Where is Nonfiction Taught?: The Difference Between MFAs in Nonfiction and MAs in Critical Theory, and more.

The second part of Elkins’ project deals more directly with the kinds of image/text issues that have long been the concern here at Vertigo. On this blog, also called Writing with Images, Elkins begins to deal directly with novels, poetry, and experimental writing that use images or that have images as a significant focal point of the text (e.g. John Ashbery’s Self-Portrait in a Convex Mirror, Javier Marías’ A Heart so White, or Thomas Bernhard’s Old Masters). To fully read all that Elkins has written so far requires clicking on numerous links throughout his two blogs, but it’s well worth it. For example, he has written extensively about one of my favorite books, Georges Rodenbach’s Bruges-la-Mort, perhaps the earliest work of fiction in which the author employed photographs. 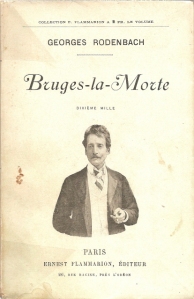 For me, one of the outcomes of reading Elkins’ blogs and occasionally emailing with him is that I have become increasingly dissatisfied with my use of the term “embedded” as a way of indicating the relationship between photographs and works of literature. When I began Vertigo in January 2007, I struggled to find the right term to describe how Sebald and other writers used photographs on their works of fiction. It wasn’t until the sixth month of writing Vertigo that ultimately I settled on “embedded” as my way of referring to the images used by authors in their works of fiction or poetry. At that time (and given the limited number of examples I knew about then) “embedded” was probably an acceptable term. In almost every example I knew, the photographs were literally surrounded by text. Now, seven years later, the term embedded feels so inappropriately hierarchical, implying a subservient role to images. “Embedded” clearly doesn’t apply to something like Wright Morris’ The Home Place, in which full page photographs alternate with full pages of text, or with numerous books in which texts and images literally bleed into each. In the current draft of Chapter 1 of Writing with Images, Elkins, too, struggles with terminology and finally says his preferred term is “‘writing with images,’ because it sounds friendly, as if the writing and the images are friends.” But even though I am unhappy with “embedded,” I don’t really  like the alternatives any better, such as W.J.T. Mitchell’s “imagetext” or Elkins’ “writing with images.” So, for the moment, I think I’ll continue to hobble along using the inadequate term “embedded” until I find something I like better. 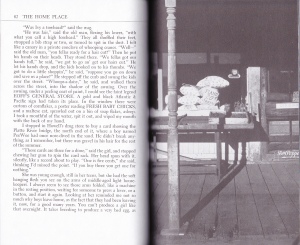 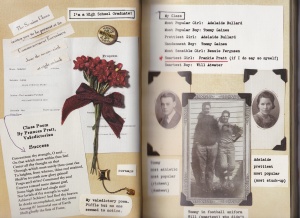 Page spread from Caroline Preston’s The Scrapbook of Frankie Pratt: A Novel in Pictures.