Posts from the ‘Juan Goytisolo’ Category 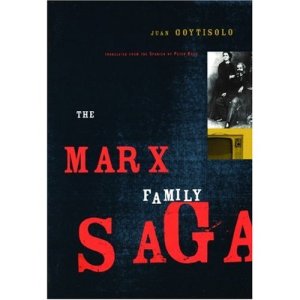 It’s rare to find a novel with a single embedded photograph.  Most fiction writers who use images, like W.G. Sebald,  scatter them throughout the text. Juan Goytisolo’s satirical novel The Marx Family Saga (Saga de los Marx, 1993) contain a single, humble photograph of the Marx family’s faithful servant Helen Demuth on the final page before the author’s brief Epilogue.  But that doesn’t mean we can underestimate the complexity that this sole image adds to the novel.

In what is now a familiar postmodernist conceit, The Marx Family Saga is story of the writing of The Marx Family Saga. Karl and Jenny Marx, still living in their London home, witness the downfall of the Soviet Empire and the reduction of Communism to the nostalgic and suddenly hip sales of Soviet memorabilia at flea markets: “loads of junk remnants of an empire’s decline and fall, of the miserable ruins of his ideology.”  As Marx moves about the poor, immigrant-filled neighborhoods of London and Paris, he endures the mockery of the very workers he thought he could save – and he wonders where his thinking went astray.

The unnamed author of The Marx Family Saga is saddled with a publisher who admires his work but worries about the “intrinsic difficulties and elitist, minority appeal” of his novels.

…the idea of transporting him into the present after the collapse of Communism wasn’t bad in itself, given the right approach you could easily have written a work with imaginative elements able to make us reflect on the justice of his denunciations and the failure of his prophecies!  when you suggested the theme we took it for granted you wouldn’t turn up with an ordinary novel under your arm but would include novel features, perhaps, for example, in the manner of some Anglo-Saxon writers who nobody would ever describe as antiquated, penetrating the depths of the souls of [Marx] and his family, probably expressing their subjectivity in the form of internal monologues, skilfully playing with different points of view, given that focus, if you follow my drift, a work could be both imaginative and true-to-life, dramatic and comic, pleasing and instructive, and that was precisely what I was expecting from you, an innovation in the genre, not a series of occasionally ribald, continuously ridiculous sketches, a delirious jumble of fantasy and totally absurd scenarios!

Faced with criticisms from his publisher, his publisher’s consultant, and a feminist historian of Marxism from UCLA, the accommodating author tries a little harder to insert some facts into his novel, mostly by conducting interviews with Karl and Jenny and others.  But the results are not pretty.  His own characters start to rebel against his descriptions of them and he is ultimately relegated to participating in a televised panel discussion on Marx (which marvelously skewers a range of Marxist academic positions).

Ironically, even as the author is pushed into more and more compromises, the underlying seriousness of Goytisolo’s book comes even clearer.  Here, the author (who always refers to himself in the second person) defends his original purpose:

you wanted to show how at the very moment when communism was being buried and the system was bankrupt, when [Marx]’s doctrines had really been discredited and the whole world was submitting either willingly or of necessity to the harsh law, but law all the same, of monetarism and the free market, the so-called leap forward was simultaneously a leap backward, things had returned to their point of departure…four-fifths of the world lived in dire poverty, millions of children were staving to death in the midst of saurian or reptile indifference, encouraged by its victories and the death of its enemy the capitalism that ruled over Europe and America was still, as its most lucid critics admitted, savagely destructive, based on immediate profit-taking and the jettisoning of civic responsibilities, and while aggressive nationalism, inter-ethnic struggles and racial cleansing spread from the underdeveloped world into the heartlands of Europe, you were all witness in your impotence to the waste of absurd military budgets, to the pillaging of nations and entire continents, to the systematic devastation of the planet, its polluted seas and sickly forests!

Eventually, the publisher and his circle attempt to focus the author’s attention on Helen Demuth, a longtime servant to Karl and his wife Jenny (“the extremely aristocratic progeny of Ludwig von Westphalen”)  and whose illegitimate son might have been fathered by either Marx or Engels.  Here, they feel, is a story with legs.  “Didn’t you think to look beneath the cliches to inspect the merciless exploitation of a working class woman…?”  Subsequently, the author goes to visit the graves of Karl and Jenny where, not too surprisingly, he finds their beloved servant sitting on a park bench.   She, too, complains that the author has made her into “a complete fake.”   He responds by scissoring her portrait out of a book and inserting it in his manuscript.

Goytisolo seems to be saying that we cannot entrust history to history.  At every turn – whether in the hands of academic disciplines, pop culture, even memory – history rapidly degrades into the base material of politics, rumor, opinion, entertainment.  Goytisolo suggests that only the complexity and contradictory nature of fiction can adequately deal with the truths that are to be found in history.  And it is here where I think Goytisolo crosses paths with Sebald, even though Goytisolo’s breathless, endless succession of phrases and his sometimes hysterical satire is the polar opposite of Sebald’s slightly antiquated cadences.  They both move about their subect obliquely, trying to give a truer picture of the ideological flea market of history through misdirection rather than head on.