Posts from the ‘Lavinia Greenlaw’ Category

At first glance, Audio Obscura (Full Circle Editions, 2011) looks like a rather well-produced chapbook that pairs poems by Lavinia Greenlaw and photographs by Julian Abrams.  And on one level that is exactly what it is, a beautifully designed volume, handsomely printed on lush paper, bound in sturdy French wrappers, with twenty-four double spreads that each have a text on the left page and a photograph on the right.  The stark black and white images that dominate each spread depict scenes within railway stations and powerfully convey both the intimacy and the anonymity of public spaces. The sentences or phrases that make up the matching poems or prose poems suggest voices overheard or the thought fragments that might occur while waiting for a train – prayers, lists, remembered conversations, pangs of guilt.  The brief texts, sometimes shorter than a haiku, have the flavor of authentic voices, although Greenlaw makes it clear that these are not found texts, but carefully shaped texts that, in her words, are meant to “hover between speech and thought.”

They’ll find out and they’ll think I knew.  But that’s not what I saw.  Not really.  I only saw a list.  You have to be absolutely sure.  Or you’ve destroyed everything for nothing.  Nothing.  A list.

As Greenlaw discusses in her Introduction, the book Audio Obscura is actually a second generation artwork, an essentially new product related to but not exactly a substitute for the original artwork, which was a commissioned soundwork of the same name.  Audio Obscura, the soundwork, consisted of a dozen monologues written by Greenlaw and audio-recorded by actors.  During a period of several months in 2011, lucky visitors to several train stations in Manchester and London were able to use headphones and listen to the monologues as they walked around the stations.  (There is considerable additional material about the project at the website of Artangel, one of the commissioners.)  Here is Greenlaw describing what participants might hear once they donned headphones and headed into the station equipped with an MP3 player, excerpted from The Guardian:

You hear station noise so you forget you have headphones on, and the idea you’re cut off goes.  Then these voices start appearing. At first you think they’re voices you’re overhearing in the crowd, then you start to overhear interior monologues – some are quite painful and explicit, some uplifting…I spent a long time coming up with situations you could map on to the people around you. So there’s a teenage girl, waiting…Having recorded these monologues, which are more poetic than narrative, I broke them down. I wanted to get to the point where you could overhear enough to imagine the rest.

As this audio excerpt shows, there is a startling intimacy to the voice speaking quietly and directly into the listener’s ears, which would have been in striking contrast to the bustling crowds, the arrival and departure of trains, and the nearly incessant noise of a busy station.   There is something invasive, almost creepy about a voice in your ear, especially since it isn’t clear whose privacy is being invaded – that of the listener or of the speaker.  Is the voice exposing something deeply private exclusively for our ears or are we eavesdropping?  In her Introduction to the book, Greenlaw, who is Director of the Poetry MA at the University of East Anglia, talks about how her concept of “dark listening” and this feeling of “transgression” relates to the idea of the dark room or camera obscura:

The fragile, shifting but acute images of the camera obscura draw you in.  In Audio Obscura, the idea is translated into ‘dark listening’ with its connotations of depths and shadows, the impalpable and the unreachable.  We enter interior lives and discover, somewhere between what is heard and what is seen, what cannot be said. We are conscious of this as transgression but unable to contain our curiosity. 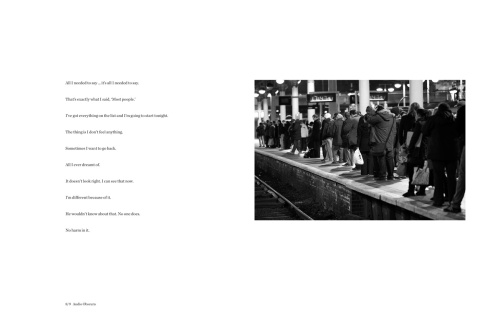 I keep thinking about the huge distance between the soundwork and the book, between the visceral multi-sensory experience in a busy train station and the silent experience of moving one’s eyes back and forth between words and images in a book.  For me, the word and image pairs never become simultaneous or connected (I’m not sure that achieving this is even possible).  They never overlay or adhere to each other in any way that alludes to the possibility of transgression or eavesdropping.  In the end, I can’t avoid sensing that the book is just a pale ghost of the original soundwork, and I must not be the only one who thought this: it was the soundwork, not the book, which won the Ted Hughes Award for new work in poetry for 2011.  Greenlaw more or less suggests that her audio monologues are site-specific (if not to specific train stations then at least to locations that masquerade as train stations), but I’d like to see them have a new life as a podcast that could be downloaded and taken for a walk without a leash.