Posts from the ‘Lionel Trilling’ Category

The Obsessive Pursuit of Human Failure

In Regrets Only, Louis Menand’s article on Lionel Trilling in The New Yorker (September 29, 2008), Menand looks back on Trilling’s 1949 book The Liberal Imagination.  (Trilling was not defining a liberal political stance;his use of the term is more akin to what we mean when we refer to “a liberal arts education”.)  One sentence caught my attention.

In Trilling’s view, the faith that liberals share…is that human betterment is possible, that there is a straight road to health and happiness.

Using this definition, it is hard for me to view W.G. Sebald as a writer who possessed a liberal frame of mind.  His books repeatedly demonstrate that over the course of history mankind’s biggest “improvements” have come about in our ability to slaughter each other with greater efficiency and to place our ecosystem in even greater risk.

At the same time, though, it is Sebald’s extraordinarily wide-ranging interests – his liberal education, if you will – that gave him the perspective and the authority to be so utterly and convincingly pessimistic about human nature and history.  As anyone who has read even one of Sebald’s books knows, he employs an astounding range of references.  I think what makes Sebald seem so enigmatic at times is this sense that he has placed his fervent curiosity and seemingly boundless energy to the purpose of utterly deflating any sense of hope.  Perhaps we can say that the obsessive pursuit of human failure might be one definition of melancholy.  In The Rings of Saturn, for example, even as the narrator stands in a small museum in Norwich admiring the intricate and beautiful products created by 19th century silk weavers, he cannot help but launch into the devastating human toll of the silk industry.

At no point that I can think of does Sebald ever seem to suggest that human betterment in Trilling’s terms – the road to health and happiness – is likely. 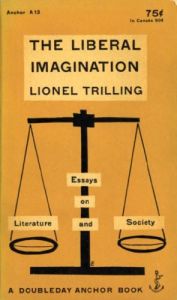