A Doll for Throwing

“I learned to use a camera to see what I could be.”

Mary Jo Bang’s A Doll for Throwing is, among other things, a book about photography, but it is also about photographs stolen and appropriated through, shall we say, the arrogance of gender and fame. But first, about the title. It comes from a soft type of doll designed in the 1920s by the Bauhaus artist Alma Siedhoff-Buscher. The doll (or wurfpuppe in German) has a fiber body and wooden head and was meant to be safely tossed between children, but in Bang’s book it takes on an entirely different meaning.

The poems in A Doll for Throwing adopt the voice of Lucia Moholy (1894-1989), the Austrian photographer who met the Hungarian artist László Moholy-Nagy in Berlin in 1920, during the fraught early years of the Weimar Republic. They married and two years later he became one of the legendary professors at the Bauhaus. To an extent that is not fully known, she taught him about photography and collaborated with him on works for which credit is often given only to him (including the four images reproduced on the book’s cover). They divorced in 1929 and in 1933 Lucia had to hastily flee Germany when her new lover, a prominent Communist, was arrested in their apartment. She did, however, manage to leave her negatives in the care of Moholy-Nagy. When he himself became an emigre, he turned the negatives over for safekeeping to the famous German architect and founder of the Bauhaus, Walter Gropius, who proceeded to use some of Lucia’s photographs for decades without crediting her. Once she was established in England, Lucia began a long correspondence to try to regain her negatives from Gropius. In the 1960s, she finally managed to get a limited number of them back, but by then her work had become submerged beneath the reputations of two famous men and she was nearly forgotten to history.

The book opens with an empty rectangle and what looks like an exhibition wall label. The empty frame represents a portrait of László Moholy-Nagy made by Lucia Moholy at the Bauhaus in 1926 and now part of the online collection of the Metropolitan Museum of Art. The poems that follow are written as prose texts and many are titled after photographs by Lucia and other Bauhaus-related artists. If you start searching online to view some of these images, you will quickly figure out that the specific shape of each poem is based on the shape of the original photograph, reinforcing the theme of Lucia’s stolen images.

Collectively, Bang’s poems flesh out a voice for Lucia that is firm and terse and confident. Many of the poems focus on or reference the gender authority drama that is playing out between her and László and Gropius. “Men have reasons for breaking the rules.” But the Lucia Moholy that Bang presents us refuses to let either sexism or exile get the better of her. Instead of regret, she will be elusive, multiple. “I wasn’t a child for long and after that I wasn’t, I was someone else. I was this. And that. A blast furnace, a steel maze inside, the low-level engine room of an ocean liner. My eye repeats horizontally what I by this time already know: there is no turning back to be someone I might have been. Now there will only ever be multiples of me.” Bang sees Lucia as a resilient woman, who repeatedly finds the strength to carry on despite the latest challenge or indignity.

She organizes the world around her—objects, circumstances, works of art, and, always, a glimpse of herself—as if everything were part of a still life.”You should know that I communicate through showing how an objects acts on me.” Objects seem more real, more important to her than people.

One poem plays off of the format of various resumes found in Lucia’s file at the Bauhaus. Here is part of “Last Name First First Name Last”::

First name, last name, studied subject, and also subject. Was employed as something by various. Was married to and with him went somewhere when. When the something moved to somewhere in date, she began to do something. In due course she did something, as well as something.

Bang’s book is beautifully designed by Ken Botnick of Emdash Design Studio in St. Louis. On the page the poems have a Bauhaus appearance with a crisp sans serif typeface and fully justified margins. Note the black bars at the top and bottom of the page, which are so characteristic  of Bauhaus design. 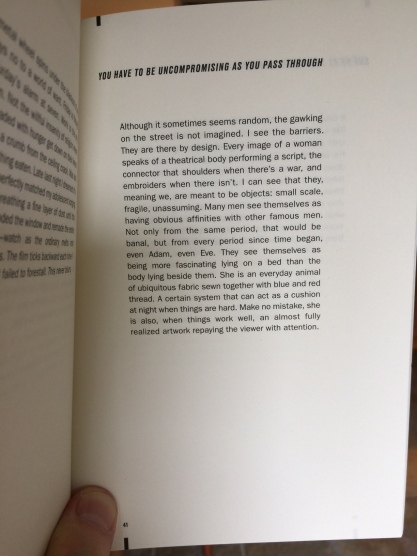 The book ends with a reproduction of an untitled photograph by Lucia that shows the bedroom of Walter and Ilse Gropius at the Bauhaus, a starkly geometic image of an utterly pristine room in which one cabinet door is opened, revealing some of Ilse’s shoes.

A Doll for Throwing (2017) is smart, defiant, absorbing, and linguistically energetic. Another great product of Minneapolis-based Graywolf Press.