Posts from the ‘Patricio Guzmán’ Category 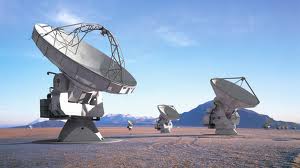 There are images from Patricio Guzmán’s 1970s documentary trilogy The Battle of Chile that are still engraved within my brain after more than three decades.  And I suspect that three decades from now I will still be able to recall images from his latest film Nostalgia for the Light (2010).  In the intervening decades, Chile has entered a period of official forgetting, of “turning the page” on the massacres and disappearances of the Pinochet regime.  So instead of being a documentary of politics and violence like The Battle of Chile, Nostalgia for the Light is a more restrained, steadfastly philosophical film about remembering and the necessity of recovering and telling the painful truth about the past.

Guzmán interweaves three concurrent, but independent narratives occurring in Chile’s Atacama Desert: the search by astronomers for clues to the Big Bang and the origins of life, archaeological discoveries about the area’s pre-Columbian inhabitants, and the search for mass graves and human remains from the more recent past of the Pinochet era.  To the searchers on the desert floor, the research in both astronomy and archaeology seem to promise reassurance.  The archaeological storyline seems to suggest, among other things, that the search for truth will continue on long after the parents and wives and other relatives of the disappeared ones are gone, that one day in the future the desert will eventually reveal its secrets.

But it is in the world of astronomy, which takes place high in the mountains of the Atacama, where Guzmán really develops powerful and poetic parallels with the people who walk the desert floor down below, straining their eyes for bone fragments.  As astronomers have recently discovered by analyzing their spectra, certain supernovae are full of calcium, the very calcium that is found in bones.  Thus, the tiny pieces of bone scattered across the desert floor are directly linked to the explosive and every-changing universe, suggesting that we are part of an endless cycle of birth and death and rebirth. 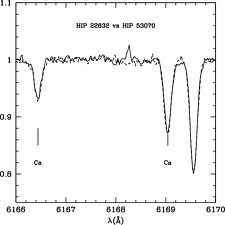 Comparison between two calcium lines in the spectra of stars

Near the end of the film, Guzmán talks about the power of memory.

I am convinced that memory has a gravitational force.  It is constantly attracting us.  Those who have a memory are able to live in the fragile present moment.  Those who have none don’t live anywhere.

Nostalgia for the Light is a most Sebaldian film.