Posts from the ‘Rachel Kushner’ Category

In fiction, when someone is known only by the name of the place they came from, it’s often a sign that they will never be anything but an outsider wherever else they go. And that’s the case with the woman known only as Reno, the protagonist in Rachel Kushner’s The Flamethrowers (Scribner’s 2013). The Flamethrowers is a thoroughly engaging and finely written, if utterly conventional, novel. It takes place in the 1970s at the Bonneville Salt Flats (the Utah location where world speed records are routinely made and broken), the New York City downtown art scene, and various locations in Italy. Reno is an aspiring artist and motorcycle aficionado who moves to New York City to take on the art world at more or less the very moment when money and power are starting to dictate the terms of New York’s increasingly vicious and competitive gallery scene. But in addition to hailing from faraway Nevada, Reno has two more strikes against her – she’s naive and she’s female – and she soon learns that the role she is expected to play is to compete for and sleep with the male artists.

The brief section that takes place in the American West is Kushner at her best. The landscape is powerfully evoked, bit characters are deftly sketched and discarded, and the pace is quick, energetic. But at its heart, The Flamethrowers is a New York novel. It’s helpful to think of it as a finely observed exposé of a time that is usually seen as a shining moment in the ascendancy of New York to art world dominance. In Kushner’s version, the male art stars are identified mostly by their grandiose sense of entitlement, their eloquent if largely empty theories, and their auras of success. Everyone around them – the gallerists, the collectors, the groupies – are pawns in a game in which cunning and callousness are just as valuable as artistic ability. Kushner is spectacularly adept at replicating the conversation-as-swordplay, the philosophically vague, artistically dubious, alcohol-infused conversations that take place wherever two or more artists are gathered together – especially if there is a fawning audience. The only problem is that some of these gassy, ego-filled jousts and monologues go on for pages and pages and greatly tried my patience.

Once in New York, Reno is quickly taken up as the lover and protégé of the hot Italian art star Sandro Valera, an heir to a sprawling motorcycle and tire manufacturing company. For years, Sandro has lived in blissful self-imposed exile in New York City, far from the dirty capitalism and class wars of the family business. But the emergence of the Red Brigades and extreme political turmoil in Italy slowly forces Sandro – accompanied by Reno – back to Italy and into the web of family and business. For me, the novel starts to go flat and a bit off-track when it shifts to Italy. Kushner abandons the subtle, complicated texture with which she painted New York and its artistic denizens, and turns the aristocratic Valera family and their servants into cardboard characters.  It’s class war done in soap opera style.

The downside of The Flamethrowers is its insistence on a socioeconomic message and Kushner’s almost painful attempt to give that message a sense of history. Generations of Valera males represent greed, ambition gone wrong, class insensitivity, and other perennially negative attributes of human nature. We get that. But to drive the point home even more forcefully, Kushner gives us the back story of the Valera dynasty through a series of occasional chapters tucked between the main narrative. She tells the rise of the Valera family business and fortune from its humble, patriotic beginning with Sandro’s grandfather serving with an Italian motorcycle corps in World War I. After building a thriving motorcycle business, the Valeras decide to expand into tires. This means the business now has an insatiable need for rubber, which is addressed by callously and cruelly exploiting workers in rubber plantations in South America. It’s a universal story of power, corruption, and the mistreatment of the many by the few. Until, that is, the unions rebel and students take to the streets. But even among the idealistic young student revolutionaries, no one is very likeable or admirable.

The Flamethrowers has five photographs within the text. But I would suggest that the cover photograph, chosen by Kushner and now the iconic image for the book, is even more important than the images inside the text. The image comes from a 1980 Italian radical newspaper called I Volsci, the contents of which can be found here. It visually addresses the book’s theme of silencing and ignoring women and it hints at the nascent feminist political awareness that hovers around the edges of the novel. As Kushner indicates below, it’s am ambivalent image.

The first image I pinned up to spark inspiration for what would eventually be my novel The Flamethrowers was of a woman with tape over her mouth. She floated above my desk with a grave, almost murderous look, war paint on her cheeks, blonde braids framing her face, the braids a frolicsome countertone to her intensity. The paint on her cheeks, not frolicsome. The streaks of it, dripping down, were cold, white shards, as if her face were faceted in icicles. I didn’t think much of the tape over her mouth (which is actually Band-Aids over a photograph, and not over her lips themselves). This image ended up on the jacket of The Flamethrowers, a creature of language, silenced.

From a short text by Kushner at the end of The Flamethrowers, called “A Portfolio Curated by Rachel Kushner”

The five photographs within the book itself also match the tenor of Kushner’s writing. Like the cover image, I sense that each interior photograph carries its own sense of ambivalence: an actress lost in thought (a film still of a glum waitress from the 1970 independent movie Wanda), a fractured image showing only the eye of a fashion model reflected in her compact mirror (an appropriated fashion image by Richard Prince), helmeted riot police (photographed by Milanese photojournalist Aldo Bonasia), masked protesters and storefront mannikins (photographed by Larry Fink), and a still image from a newsreel showing five figures seen from behind as they walk toward the Italian film studio Cinecitta. Just as these images show us only masks, helmets, mannikins, models, actresses, and silhouettes, The Flamethrowers, I would argue, is more about types than characters. Everyone who appears in the book, including Reno herself to some extent, remains a bit like the impersonal figures in the embedded photographs. It seems significant that throughout years spanned by the book, Reno fails to find a single likeable, trustworthy individual – not among the artworld denizens, not among the Valera family, and not even among the protesters and student radicals in New York and Italy. In a way, The Flamethrowers feels a bit like a documentary novel focused intensely on a time period, a magnifying glass placed at the edge of an ant farm.

In an interview at The Quietus, Kushner talks about the photographs that appear within the text of The Flamethrowers:

I always wanted to have images in a book, and with this one, after I got to have my choice of the image on the North American cover, I got a little bold, and asked about putting images inside. My editor said yes, so I quickly put together a short list of ideal visual passages. I didn’t want anything that would illustrate the narrative. I wanted, instead, images as kind of pauses, or counterpoints, but that would complicate, function in a relation, but not an obvious one. There’s a Richard Prince image, and he’s a shadow presence over the course of the book (one of the characters is also the name of Prince’s alter-ego, John Dogg). There’s a photograph by Aldo Bonasia, of a riot and police tear-gassing the rioters, in Italy. There’s a still from the movie Wanda, which figures in the book … 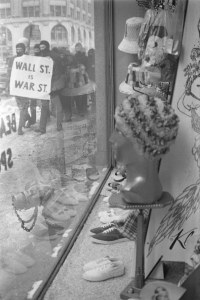 At the conclusion of the book, Reno finds herself in the French village of Chamonix, waiting for the most recent man who seems to have abandoned her. “How long was I meant to wait?” she asks herself.

The answer is not coming.

I have to find an arbitrary point inside the spell of waiting, the open absence, and tear myself away.

Leave, with no answer. Move onto the next question. 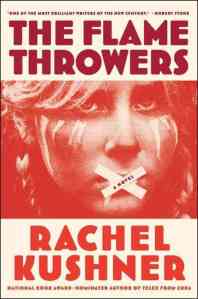