Posts from the ‘Richard Powers’ Category

Does Fiction Know Something We Don’t Know? 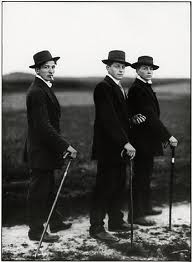 August Sander, Three Young Farmers on the Way to a Dance, Westerwald, ca. 1914

When you have a few minutes to spare, I recommend that you slide on over to Places, the online journal housed on the Design Observer website, and read the essay “What Does Fiction Know?” by novelist Richard Powers.  In 2009, Powers taught in Berlin for twelve weeks and struggled through his personal version of Theodor Adorno’s accidental maxim that “writing poetry after Auschwitz is barbaric.”

A day does not go by in this place when the unspeakable doesn’t insinuate itself into the most casual restaurant or bakery or drugstore transaction. Europe died; explanations died of grief. Not much of a plot, but there is no other….For the first time since my initial bout with fiction over 25 years ago — a fable about a very real German photograph taken on the eve of the First World War, that prelude to all the following unknowable psychosis — for the first time since I committed myself to the novel, fiction has begun to feel at worst indecent and at best vaguely irrelevant — a Hail Mary plea from the middle of reality’s cross-hairs. It’s Berlin’s fault, I guess: not just the inconceivable past but the ridiculously buoyant present. What chance does personal fiction have against public facts the size of this place?

It’s a great piece of writing, even if Powers manages to have it both ways.  Even as he belabors his fears about the futility of writing, he’s preparing the gotcha that he plans to pull out of the hat at the last minute, when he reminds us that “the point of any story is to show how cobbled up, desperate, and provisional all stories really are.”  But Powers’ piece is more than a meditation on place and on the stigma that haunts Berlin.  In Berlin, Powers comes to see that the framework that has structured his own fiction and his thoughts about literature for twenty-five years means little to his young Berlin students.

…bring it all on, my German students say. The blurrier the better. They have grown up in a world that laughs at the very distinctions that I’ve come here to challenge, and in class, they regard me with affectionate pity for my quaint belief in the existence of boundaries that a writer might still hope to exploit by transgressing.

Places is using Powers’ thought-provoking essay as a way of inaugurating a month-long series of short stories based upon the theme of place.  The first story just appeared: Urban Waite’s “No On Heard a Thing the Night the Chicken Died.”

[In the event that, like me, you’re a little fuzzy on the context of the Adorno quote, a recent post over at Mindful Pleasures is a helpful start.]