Posts from the ‘Young Austerlitz’ Category

At my grandparent’s house there were hundreds of books that ranged from rose gardening to Scottish poetry to three-decker novels by Bulwer-Lytton, all nestled in the arts and crafts bookcases that adorned nearly every room.  Every year I spent entire days at their house reading and absorbing new subjects and consuming 19th century novels.  By contrast, my parents had only several shelves of unread Reader’s Digest Condensed Books and an encyclopedia set that I refused to consult.  Even as a young child with a library card and a voracious appetite for books I remember thinking it was somehow wrong to reduce a book’s wordage, although I couldn’t articulate what my rationale was at the time.  So perhaps it was inevitable that I would become a literature major as an undergraduate as a way of sorting all this out for myself. 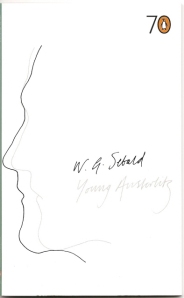 I hadn’t given condensed books much thought for, well, let’s just say several decades, until Penguin announced in 2005 the posthumous inclusion of something called Young Austerlitz by W.G. Sebald in its series of seventy titles celebrating the 70th anniversary of their Pocket Penguins series.  I was horrified at the mere idea of Austerlitz reduced to 68 pages.   Young Austerlitz, it turned out, much to my relief, was not an really an abridgement, but a word-for-word – and illustration-for-illustration – excerpt from Austerlitz.  In 2005, as part of the celebrations of its 70th anniversary, Penguin (which owns Sebald’s British imprint Hamish Hamilton) issued excerpts from 70 titles spanning its publishing history. Austerlitz was chosen to represent the year 2001 and so a 58-page excerpt from Austerlitz was published in a slim paperback under the title Young Austerlitz.  The excerpt covers pages 44 to 96 in the American edition, in which Austerlitz describes part of his childhood in Wales. 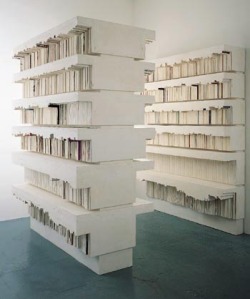 I was reminded of this episode with Young Austerlitz sometime last year when the Summer 2009 issue of The Review of Contemporary Fiction landed in my mailbox and much to my delight and puzzlement the cover announced a “Special Fiction Issue” devoted to “Herman Melville’s ; or The Whale“, edited by Damion Searls.  In his playful Introduction, Searls explains that “; or the Whale is a lost work from Herman Melville’s major period (1851), never before published … until 2007.”  In truth, ; or the Whale is a reverse abridgement of a 2005 publication called Moby-Dick in Half the Time, which is part of a series from Orion Books called Compact Editions – “Small(er) is beautiful”.  Like a Rachel Whiteread sculpture, ; or the Whale is an exploration of the negative space that occurs when a novel is condensed.  What Searls had done was to painstakingly construct yet another condensed version of Melville’s novel by including only the bits cut out by Orion Books, using as his title the deleted half of Melville’s original title Moby Dick; or The Whale.

Reading Searls’ loving reconstitution of Moby-Dick was surprisingly fun.  But rather than writing up my own response, it seems only fitting to simply steal the press release issued by the publisher of The Review of Contemporary Fiction, Dalkey Archive:

Moby-Dick in Half the Time, an abridgment by Orion Books which Adam Gopnik notoriously described in The New Yorker as “all Dick and no Moby,” has now called forth an spirited rebuttal. In an act of arguably Ahabian obsessiveness, writer Damion Searls has pulled together every chapter, word, and punctuation mark that Orion’s abridger cut from Melville’s original Moby Dick; or The Whale. The result—inevitably called ; or The Whale—has been published as a book-length special issue of the Review of Contemporary Fiction, making it the first contemporary fiction by Herman Melville to appear in almost 150 years.

“I have nothing against abridgments, I make them myself,” says Searls, who holds a Ph.D. in early American literature.  His one-volume abridgment of Henry David Thoreau’s 7,000-page Journal, produced with traditional methods, will be published by NYRB Classics later in 2009. “After all, the original is still there for anyone who wants it. I just think we should ask what we value, what we want to abridge for. Orion went for a straight-ahead story with a clear plot arc, but what makes Melville Melville is digression, texture, and weirdness. If you only have time to read half the book, which half the time is more worth spending?”

In a cover story for The Believer magazine (“Carving the Whale,” September 2009), Searls describes Melville’s new novel as a good read, filled with humor and  unexpected poetry. Chapter 62 consists of a single word, “hapless”—the only word Orion’s abridger cut from the chapter, trimming a 105-word sentence to 104; the book’s first sentence is “methodically”; the final hunt for the white whale dissolves into pure punctuation. And the emotional arc of the book is the same as in Melville’s original, because Melville’s excess comes at moments of emotional intensity, and that excess, trimmed from Half the Time, is what makes up ; or The Whale. Searls describes it as like watching a DVD on fast forward, and it may get you closer to what Moby Dick is really like than the other abridgment does.

Bringing readers closer to others’ works is the goal of many of Searls’s efforts. He translates from German, Norwegian, French, and Dutch, bringing classic writers like Proust and Rilke and less known writers like Ingeborg Bachmann and Jon Fosse to American readers. His new book of short stories, What We Were Doing and Where We Were Going, is a collection of “cover versions”: present-day stories inspired by Nabokov, Hawthorne, and other writers from around the world. For the Review of Contemporary Fiction, though, ; or The Whale is not just a version of Moby Dick but a work of literature in its own right: “Otherwise we wouldn’t be publishing it,” insists editor Martin Riker. The quick cutting and narrative elisions are very 21st Century, irrespective of whether the author wrote 19th Century classics too.

Author Herman Melville could not be reached for comment.

For example, here is Searls’ version of Chapters 10 and 11 in their entirety:

It may seem ridiculous, but

He made no advances whatever; appeared to have no desire to enlarge the circle of his acquaintances.

If there yet lurked any ice of indifference towards me in the Pagan’s breast, soon thawed it out, and

what little nappishness remained in us altogether departed, and

Damion Searls, by the way, is the translator of Melancholy by Jon Fosse, which I have written about earlier.

If it seems like the posts on Vertigo have been few and far between lately, it is because a pair of monster-sized books are really slowing me down.  I’m making my way through Thomas Mann’s The Magic Mountain, which alternates between fabulous moments and long dry spells.  And I’m reading yet another abridged title for which Damion Searls is responsible: a newly  edited version of The Journal by Henry David Thoreau, which nevertheless comes in at 667 pages.  More on Thoreau later. 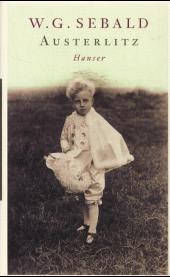 In spite of his growing international acclaim, the German and true first edition of W.G. Sebald’s Austerlitz appears to have been released in a small first run before going into multiple printings.It is my impression that it is easier to find first printings of the German trade editions of Schwindel. Gefuhle (released in 1990 in a first printing of 10,000 copies), Die Ausgewanderten (published in 1992 in a run of 7,000), or Die Ringe des Saturn (released in 1995 in a first run of 10,000 copies). As soon as Austerlitz came out (Munich: Hanser Verlag, 2001) I bought a copy signed by Sebald from a German dealer and when it arrived I was surprised to find that it was already a second printing.Hanser identifies the printing states on the copyright page using the simple code that many American and British publishers use. The code on the first print run would read 1 2 3 4 5, with the smallest number being dropped for every subsequent printing.The Hanser edition is bound in a green (almost gray) cloth with a silver-stamped red leather sticker on the spine and the book comes with a red cloth page marker.

The mysterious cover photograph has almost taken on a life of its own. The photograph of a young fair-haired Aryan boy in an all-white costume and holding a white tri-cornered hat was used on the first editions of Germany, Britain, and the United States shows. It’s an image that seems to me less connected to the character Austerlitz himself and more to Germany’s pre-World War II nostalgia for a glorious past.(Could that actually be the young Sebald or is it just one of his flea market photograph finds?) 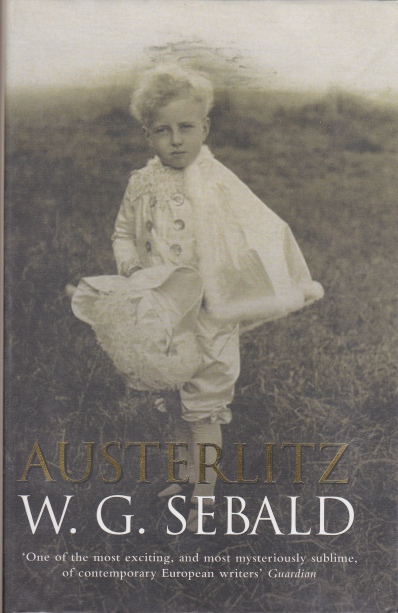 The first trade edition in Great Britain (London: Hamish Hamilton, 2001) was bound in maroon cloth with a gold-stamped spine.My copy is signed by Sebald on the title page.I have seen one dealer claim that there are different states to the dust jacket, with the earliest state having the price on the rear flap rather than the front flap, but I cannot confirm this. 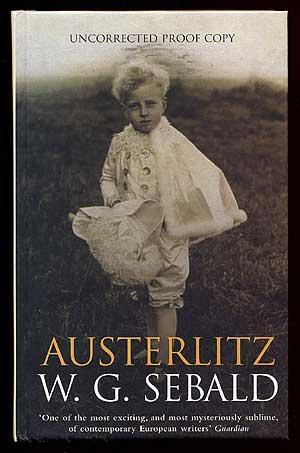 The British trade edition was preceded by two versions of the “Uncorrected Proof Copy.”One version served the usual purposes of providing advance reading and review copies.The proof is a compact, expense-saving octavo eight inches high and 357 pages long, in comparison with the more substantial trade version that Hamish Hamilton put out, which measures nine inches high and is 416 pages long and 50% thicker. A version of the “Uncorrected Proof Copy” was turned into a limited edition that is now one of the more expensive items for a Sebald collector. There were 100 numbered copies of this special edition, each signed by Sebald.I don’t own one of the limited editions, so I cannot provide a comparison with the ordinary “Uncorrected Proof Copy.” 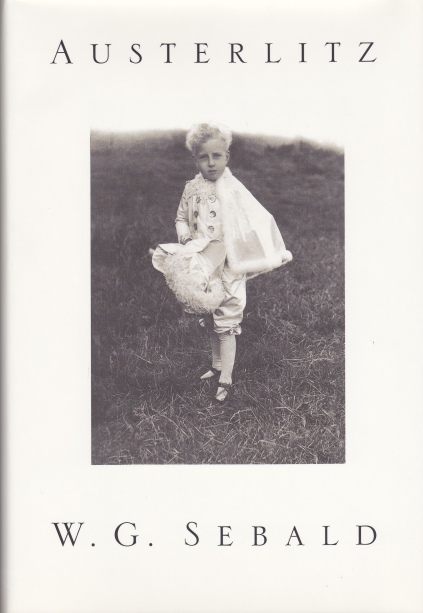 Random House put out the American edition of Austerlitz in the fall of 2001, bound in sepia brown paper boards with a silver-stamped black paper spine.Unlike the German and British editions, which each run around 415 pages, the larger page format of the American edition allows the book to check in at 298 pages.One of the small, easy to overlook treasures of the Random House first edition is the back cover blurb by poet W.S. Merwin (which was apparently too poetic to be retained when the book went into paperback). Merwin writes:

With untraceable swiftness and assurance, W.G. Sebald’s writing conjures from the details and sequences of daily life, and their circumstances and encounters, from apparent chance and its unsounded calculus, the dimension of dream and a sense of the depth of time that makes his books, one by one, indispensable. He evokes at once the minutiae and the vastness of individual existence, the inconsolable sorrow of history and the scintillating beauty of the moment and its ground of memory. Each book seems to be something that was purely impossible, and each (upon every re-reading) is unique and astonishing. 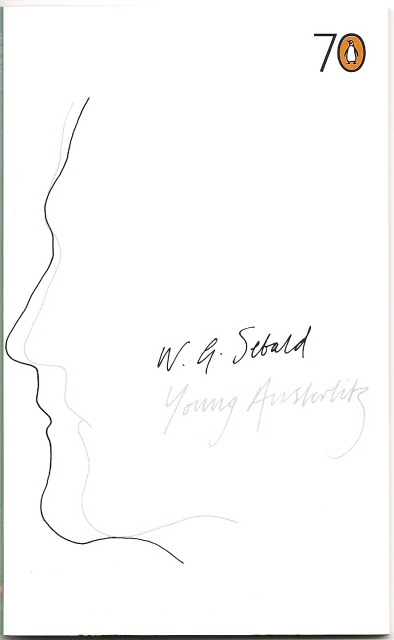 In 2005, as part of the celebrations of its 70th anniversary, Penguin (which owns Sebald’s British imprint Hamish Hamilton) issued excerpts from 70 titles spanning its publishing history.Austerlitz was chosen to represent the year 2001 and so a 58-page excerpt from Austerlitz was published in a slim paperback under the title Young Austerlitz.The excerpt covers pages 44 to 96 in the American edition, in which Austerlitz describes part of his childhood in Wales.

Finally, a bookmark from Hanser promoting the German edition of Austerlitz.

In 2011, Hanser marked the tenth anniversaries of Sebald’s death and the publication of Austerlitz with a new paperback edition, to which was added an introductory essay by James Wood. 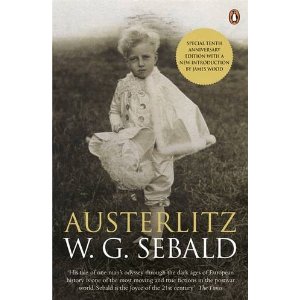