Posts from the ‘Adam Scovell’ Category

History as Amnesia: Adam Scovell’s “How Pale the Winter Has Made Us”

‘… I am a voluntary exile, a wanderer by design, unwise with a purpose, everywhere a stranger and everywhere at home, letting my life run its course where it will, rather than trying to guide it, since, in any case, I don’t know where it will lead me.’
— Johann Wolfgang von Goethe, Italian Journey

How often is the main character of a novel a city and not a person? In Adam Scovell’s new novel How Pale the Winter Has Made Us, the first thing we see (after the epigraph from Goethe quoted above) is a reproduction of a 19th century photographic postcard of the cathedral of Strasbourg, France towering over the roofs and chimneys of the city. Isabelle, our narrator, who is staying in Strasbourg while on break from her university, has just learned that her father has committed suicide back in London. She is living at her partner’s apartment while he is conveniently on business in South America. Stunned by the death of her father, a failed painter, and at war with her “harridan mother,” Isabelle contemplates extending her stay in Strasbourg indefinitely. The idea comes to her “to stay in the city, and in some sense map it.”

And so it is that Isabelle spends the winter alone in Strasbourg, exploring its streets and its history. As a scholar, perhaps it’s natural that she pours herself into research as a way of dealing with the mixture of grief and guilt she feels over her father’s death and her failure to return home to help her mother deal with the estate. Isabelle wanders, sits in coffee shops, and examines antiques. Eventually, a sense of melancholy settles in as Isabelle begins, in a strange way, to enjoy her isolation and loneliness, as she explores the lives of some of the intriguing citizens of Strasbourg’s history, several of whom Scovell has conveniently invented.

As in Scovell’s previous novel Mothlight, his new book is partly structured around reproductions of photographs. On several occasions the photographs that Isabelle collects or sees during her visits to antique stores and flea markets serve as the pretext for Scovell to invent characters that are supposedly from Strasbourg’s history, such as the “celebrated” photographer of trees, Oliver Franck, or “the Keller Group,”

– a mixture of explorers, botanists, geologists and artists, all from the city of Strasbourg – [which] was one of the key instigators of the Naturkunst revival of the last century. The group produced visual art and writing with a basis of creative endeavour in the rigour of natural history and science, but in a more casual and empathetic way than such individual fields often required.

But most of the characters that Isabelle researches were once actual residents of Strasbourg, like Johannes Gutenberg, who lived in Strasbourg in the mid-1400s for about fifteen years before inventing movable type; or Jean-Baptiste Kléber, the famous General of the French Revolutionary Wars; or the French artists Gustave Doré and Jean Arp, who were both born in Strasbourg.

Isabelle’s wanderings and research seems aimless, yet she also feels that something is steering her. “Perhaps it was the Erl-King guiding my hands.” The Erl-King, or Erlkönig, is central to Isabelle’s story. She seems to see or sense the elf-king everywhere, and as she studies the history of this bit of folklore, she discovers that Johann Gottfried Herder and Goethe, the two German poets who wrote the most important poems about the Erlkönig, met in Strasbourg in 1770 in what might be described as one of the most momentous events in German literary history. Isabelle is irresistibly drawn to the past as a form of escape. “History was always more tangible than the present,” she says.

Ironically, Isabelle has rich, meaningful encounters with some great contemporary characters—with antique dealers, a skate boarder, and with others she meets on the streets of Strasbourg. There’s the homeless guy named Michel who likes heavy metal music and calls her “the Duchess.” She gives him food and they talk about the lyrics he writes in a notebook. “Every vulnerable man is my father,” she decides. These seemingly incidental episodes are, to me, some of the best and most interesting pieces of writing in the novel.

As spring approaches and Isabelle feels that “the streets were now mapped over my skin,” she has a critical revelation: “I was not mourning, I was petrifying.”Her experiment in isolation is coming to an end.

I could feel my country many miles away slowly sinking into the abyss as my quiet tears fell onto the stone floor. I had mourned through the tramping of pavements, through conversations with the elderly, through strange and wonderful objects and the history of Strasbourg. I wanted to die, for my body to follow my mind in finality towards darkness along with the Erl-king on his journey back through the void, feeling that there was no more that I could know or learn. There were no streets upon my arms really, just a collection of red scars and lines on a thin-looking layer of skin, so white as to almost seem translucent.

How Pale the Winter Has Made Us is a big step forward from Scovell’s first novel Mothlight. The underlying connective tissue is more substantial. There’s much more for the reader to ponder and in so many more directions. The writing, though it still reflects Scovell’s signature tendency towards restraint, is getting looser and more emotive. I also have a theory that as he becomes less reliant on the use of photographs as a stimulus, the writing gets better. This is one of those novels I enjoyed even more on the second and third readings.

Adam Scovell. How Pale the Winter Has Made Us. London: Influx Press, 2020. 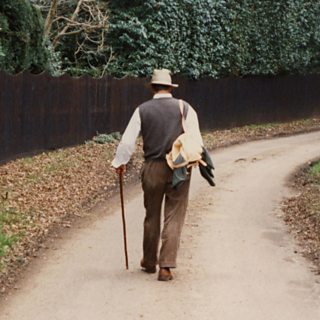 BBC Radio 3’s program Free Thinking has recently put out on episode that includes a nice segment on W.G.Sebald. The first 18 1/2 minutes of the 48-minute program, “Sebald, Anti-semitism, Carolyn Forche” is devoted to a discussion of Sebald by Adam Scovell, Philippa Comber, Dr Seán Williams, and host Laurence Scott. Here’s the full blurb from the program’s website:

Adam Scovell, Philippa Comber and Sean Williams discuss the influence of the German writer WG Sebald who settled in Norfolk. His novel The Rings of Saturn follows a narrator walking in Suffolk, and in part explores links between the county and German history and emigrants. “Lines of Sight: W.G. Sebald’s East Anglia,” an exhibition celebrating the work of the author W.G. Sebald on the 75th anniversary of his birth runs at Norwich Castle Museum & Art Gallery 10 May 2019 – 5 January 2020 in collaboration with The University of East Anglia. Adam Scovell is a film critic and author whose new novella is called Mothlight. Dr Seán Williams is a New Generation Thinker who teaches Germanic Studies at the University of Sheffield. Phillippa Comber is the author of Ariadne’s Thread – In Memory of W.G. Sebald and “In This Trembling Shade,” ten poems set to music as a song cycle.

Adam Scovell’s Mothlight is a quietly unsettling novel narrated by Thomas, a young academic lepidopterist who specializes in studying and collecting moths. Growing up, Thomas was obsessed with two elderly women—Phyllis, a professor of entomology and a collector of moths, and her sister Billie. At first, Thomas’s obsession revolved around a mystery—why did Phyllis treat her sister with such open disdain? “What had Billie done, I thought, that Phyllis Ewans considered so awful as to behave so coldly towards her?” After Billie died, Thomas became the elderly Phyllis’s caretaker, and his obsession switched to something else entirely. “Our lives were somehow mimetic of each other,” Thomas noticed that he and Phyllis shared a “synchronicity.” Then, when Phyllis dies, Thomas inherits her house and her extensive moth collection. But her death “cast my obsessions into a startling cage from which I could not escape.” He feels that Phyllis’s memories are starting to intermingle with his own and that she is sometimes eerily present, even touching him. His obsession is now an illness and to cure himself he decides he must unravel the mystery of Phyllis and Billie.

The “synchronicity” between Thomas and Phyllis reflects a theme of gender fluidity that is deftly woven throughout Mothlight. It unsettles young Thomas to feel that his memories and maybe even his self might be blending with a female counterpart who is generations older.

I had even felt at times that I was Miss Ewans which, as a thought, would shake me to the very core. “I am a boy and my name is Thomas,” I would often say to myself as a mantra, though it felt hollow.

My need to dominate Phyllis Ewans’ house grew to startling proportions. In my mind, I was convinced that the quickest way to answer my questions regarding her life was to organise the house. Her life was, so I kept repeating to myself, now contained only within these walls, within these objects, these photographs, these dead insects, these unfinished papers on the breeding patterns of privet hawk moths. As my obsession grew, my appetite lessened; I allowed for the occasional daydream, which often involved the proud display of a new collection of specimens on the walls of the department: my crowning achievement for an underfunded and disavowed segment of the university. My daydreams would continue, shaking hands with people more important than I was, showered with gratitude for the immense amount of work it clearly must have taken to organise, document, and restore the many moths in the collection.

Needless to say, his daydream that the university will be grateful for the gift of the moth collection that he has inherited from Phyllis and which he meticulously organizes will prove to be woefully unfounded.

Scattered across the book’s pages of Mothlight are about thirty snapshots from a collection that Scovell inherited. Elsewhere he describes them as “unnerving and eerie.” I didn’t find them particularly so, but then Scovell seems to know the people who took the photographs and who appear in them and that could change one’s reactions. Scovell uses some of the photographs to provide structure for his novel, building scenes and locations around specific images, as in the image of a hotel shown above.

Scovell writes in a formal style that reminded me at times of Kazuo Ishiguro. This kept me at an emotional distance from Thomas, but then he’s not a character one is likely to relate to very closely. He’s a lonely, haunted man who repeatedly sends himself down paths that the reader recognizes lead only toward certain disappointment.

Mothlight struck me as an oddly repressed novel for the year 2019. It scrupulously avoids and dances around Phyllis’s mystery—a secret lesbian affair—for 150 pages. And even in the end the novel cannot bring itself to be definitive. On its final pages, Thomas visits Heather, the daughter of Elsa, the mysterious woman who seems to have been Phyllis’s lover. She shows him an album of photographs from several trips the two women took together, but Thomas refuses to admit the obvious.

Heather was to show me one final photograph. The Polaroid simply had the pair of women together, and I could see that Heather was hopeful that this would be enough, that nothing else would need to be said.

But the photograph was not enough; it could have meant anything.

Thomas finally demands a definitive answer. “But what did Elsa mean to Miss Ewans?” To which Heather answers cryptically: “Phyllis Ewans walked,” she said, “and that is all.” And so the novel ends.

Adam Scovell is a filmmaker and writer. He writes the great blog called Celluloid Wicker Man, which is mostly about film. Mothlight comes out in early February 2019 from Influx Press, which has created a short film that eloquently introduces the book.