Posts from the ‘Michelle Bailat-Jones’ Category 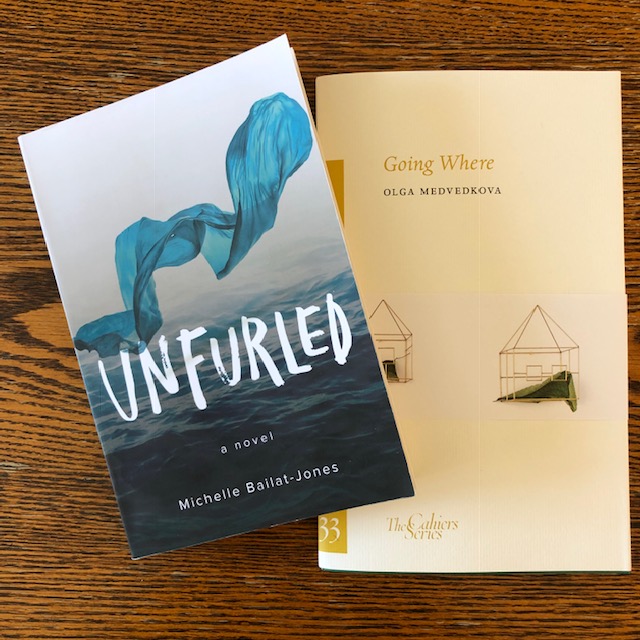 Neither of us realized we had been living in a borderland all that time, a place where rules are too often unspoken, never declared. We didn’t understand there were passports and checkpoints involved. And that not all three of us would make it through.

So begins Michelle Bailat-Jones’s second novel Unfurled, whose narrator Ella is about to have one very bad week. Ella is a veterinarian, highly sensitized to the health and needs of animals, but prone to ignoring those things that make her own well-being precarious. Almost simultaneously, Ella’s father is killed in an accident and she discovers she is pregnant. What Bailat-Jones does here is to flip the obvious scenario, which would be to close down Ella’s past and open up her future. Instead, the death of Ella’s father reveals that there were secrets he had hidden from her throughout most of her life. And bearing a child is not a future that she envisions for herself. She decides she will eventually terminate the pregnancy.

Ella’s mother, as we see in flashbacks, was mentally unstable and walked out of her marriage when Ella was ten, leaving Ella and her father to build a new family of two. Or so Ella thought. For years, she has walled off any memory or hint of emotion about her mother except anger and blame. But with her father’s death she learns that he seems to have secretly been in touch with her mother for years. And then she learns he owned a cabin, which is now Ella’s. Did her father have secret rendezvous there—perhaps with her mother? Ella’s instant and stubborn reactions to these two life-changing events also begins to threaten her marriage with Neil.

What I found fascinating about Unfurled was the way in which revelation and concealment act like two tectonic plates that are approaching each other and vying to dominate. As Ella hunkers down within her fear and mourning, she seems to notice every little thing within her frame of vision: “Neil’s hands on the steering wheel, my boots on the floor, my knees shaking, my hands fluttering around and over the pocket of my jacket with the torn photos.” Ella notices exactly how long certain actions take, how far she has to walk, but she won’t acknowledge (or share with the reader) the core mystery of her mother’s departure many years before. By the end of the book we have learned a bit more, but not everything is revealed.

Ella and her father, who had been a ferry boat captain, share a deep love for sailing, allowing Bailat-Jones to use the language of sailing as a metaphor for the way in which Ella navigates her life. She writes with such emotional intensity that reading Unfurled suddenly seemed like the most urgent thing I needed to do.

Every few months or so I look forward to the next number of  The Cahiers Series, which is co-published by the Center for Writers & Translators at The American University of Paris and Sylph Editions in London. Since 2008, there have been thirty-three publications in the series, each of which is a beautifully designed combination of writing and imagery. I’ve written about a number of previous issues, and the newest Cahier is equally terrific. Going Where is a series of five brief stories by Olga Medvedkova, a Russian writer and art historian who lives in France. Each of her stories is named after the city in which the narrative takes place: Palermo, Athens, Venice, Lisbon, Jerusalem.

There’s an aura of both strangeness and estrangement in each story. The act of traveling disorients her characters, forces them into unfamiliar encounters, and provokes rash decisions. Each story is the encapsulation of a persona on the verge of doing something out of character. Here is Malvina Süstirn, a young archaeologist visiting Athens and about to sleep with a man for the first time:

The separation of the human race into two sexes did not make much sense to her. She belonged to a university world made up not of men and women but of colleagues, all of a certain neuter gender . . . She noticed others forming or breaking up their couples the way one observes the life of ants or frogs; it did not concern her. And, suddenly, this young man with the princely name pleased her. He belonged to the opposite sex, of course, but as if accidentally. Just as she, superficially, resembled a girl.

If I am not mistaken, this is Medvedkova’s first appearance in English and I can’t wait to read more by her. Her stories are translated by Richard Pevear and are accompanied by photographs of small brass houses made by the Japanese artist Hana Sakuma. 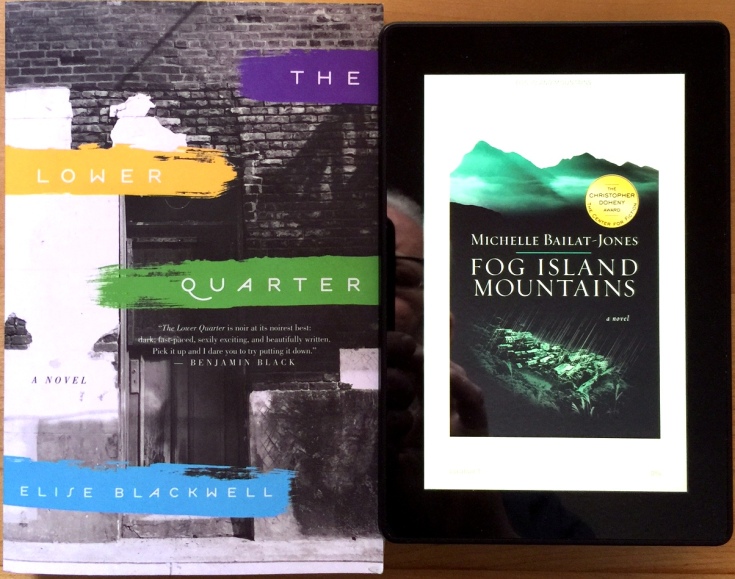 Every year I read many more books than I can find time to write about on Vertigo, and so I use the category Recently Read as a way of bringing attention to the occasional book that stands out but isn’t quite at the heart of what I tend to write about here. Two books have lingered in my imagination over the last couple of months – Elise Blackwell’s The Lower Quarter (Unbridled Books, 2015) and Michelle Bailat-Jones’ Fog Island Mountains (Tantor, 2014).

Reading The Lower Quarter is like closely examining an inset that magnifies a small neighborhood on a map of New Orleans. Obliquely a mystery that centers around a missing artwork and the murder of the last man who possessed it, the book explores the intersecting paths of four characters who, post-Katrina, are trying to rebuild their lives even as the lower French Quarter rebuilds itself. Blackwell only hints at some of the critical events that have shaped and propelled Johanna, Eli, Marion, and Clay on stage, leaving it to the reader to try to piece together the backstory of each character. The book spans a few months during which the quartet of characters warily venture into each others’ lives. The Lower Quarter has a 21st century noir sensibility, with gnarly things like online revenge, sadism, and sex trafficking scrolling across the background. Blackwell has a knack for always leaving the reader slightly off balance; every time that one loose end gets resolved, another strand starts to unravel.

Here’s Johanna, an immigrant who makes a living as an art restorer:

How the change had occurred she could not have articulated if pressed, but across time, mostly gradually and unconsciously but occasionally with moments of leap and clarity, she began to feel as if she was part of the city. This nourished an understanding that a history can be adopted, that the history of the city could be her history and that she could become part of its history, regardless of where she’d been born or how recently she’d arrived. After all, that was what New Orleans had always been: a receiver of outsiders and immigrants, a blender, a granter of new identities, a place where you could disappear and then resurface under new terms…

This way of thinking had something to do with her work, too. She understood that her vocation made her, by choice, a person who believed that at least some damage can be undone, that original states can be recovered or at least approximated, that life can go on as though some things never happened. She knew, too, that you could also simply paint over a canvas, change the picture for good, so that without an x-ray machine it looked like the former story had never even existed.

Fog Island Mountains is a lush book, rich in language and vibrant in imagery. It centers around a married couple that live in a mountain village in Japan. As the book opens, Alec (originally from South Africa) is learning that he has terminal cancer, while his Japanese wife Kanae, already sensing the calamitous news and fearful of what lies ahead, is about to run away. An approaching typhoon mirrors the inner turbulence that consumes the couple. Much of the power of the novel comes from the omniscient narrator Azami, a mysterious elderly lady who is their neighbor. Azami, who is referred to an “an old fox,” is cast in the role of a kitsune, the fox which, in Japanese myth, has supernatural powers and can take the form of a human. Azami watches the typhoon as it sweeps over the village and, in her own discrete fashion, tells us how Alec and Kanae separately cope with his prognosis. Here, Azami watches as Kanae finally breaks down in tears:

Let us give her this moment, let us turn away, because the relief in letting herself cry will be ugly for us to look at, we can step outside the door so as not to hear her whimpering, we can stand here a moment feeling the force of the wind and the sound of the crashing up in the forest, and when she’s ready, it won’t be long, Kanae has always been the stronger one, we can step back inside…

I thoroughly enjoyed both of these weather-inflected novels. As Azami says (in Fog Island Mountains): “The clever thing with stories is that they are never really fixed, they are meant to change as often as the listener needs them to be something else entirely.”