Posts from the ‘J.G. Ballard’ Category

Dislocations: Empire of the Sun 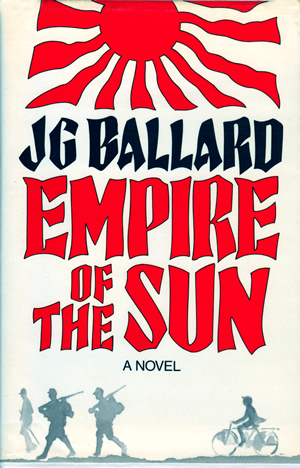 I am not sure why I have avoided J.G. Ballard’s 1984 autobiographical novel Empire of the Sun until now, but I finally read it recently. Empire of the Sun is a stunning and altogether very curious piece of writing. I wasn’t too far into this cruel novel of World War II intern camps and, almost incidentally, the birth of atomic warfare, before I found myself reading intertextually, as it were, reading Ballard with the ghost of W.G. Sebald continuously hovering between his lines. Ballard writes in his Foreword:

Empire of the Sun describes my experiences in Shanghai, China, during the Second World War, and in Lunghua C.A.C. (Civilian Assembly Centre), where I was interned from 1942 to 1945. For the most part this novel is an eyewitness account of events I observed during the Japanese occupation of Shanghai and within the camp at Lunghua.

Jim is about ten years old when war disrupts his family’s comfortable life in Shanghai, causing him to become separated from his parents. He spends much of the book wandering the outskirts of Shanghai, a witness to endless destruction as the armed forces of China, Japan, America, and Great Britain converge.

These strange dislocations appealed to Jim. For the first time he felt able to enjoy the war. He gazed happily at the burned-out trams and tenement blocks, at the thousands of doors open to the clouds, a deserted city invaded by the sky. It only disappointed him that his fellow prisoners failed to share his excitement. They sat glumly on the benches, staring at their feet.

Jim is ultimately interned at Lunghua, one of the Japanese-run camps for the foreign population of Shanghai. At Lunghua the cruelty of the Japanese camp guards infects the internees, who readily create their own hierarchy of power and violence, survival and death. Eventually, the camp comes to represent a level of security and predictability for Jim (and many of the others). One of Jim’s prized possessions is a small, grainy photograph, pinned to a wall in his camp cubicle. Torn from a newspaper, this photograph couldn’t help but remind me of the many obscure, poorly reproduced photographs scattered across the pages of Sebald’s books, photographs which have an incantatory power that transcends the often insignificant images they contain.

…Jim was at his happiest in this miniature universe. On the walls he had pinned several pages from an old Life magazine that Basie had given him. There were photographs of the Battle of Britain pilots sitting in armchairs beside their Spitfires, of a crashed Heinkel bomber, of St. Paul’s floating like a battleship on a sea of fire. Next to them was a full-page color advertisement for a Packard motorcar…Beside the Packard was a small section that Jim had cut from a larger photograph of a crowd outside the gates of Buckingham Palace in 1940. The blurred images of a man and a woman standing arm-in-arm reminded Jim of his parents. This unknown English couple, perhaps dead in an air raid, had almost become his mother and father. Jim knew they were complete strangers, but he kept the pretense alive, so that in turn he could keep alive the lost memory of his parents.

A natural survivor who never sees himself as a victim, Jim is a disengaged, astute observer, ferreting out the relationships of power, the signs of weakness, the minute differences between eating and starving, between favor and execution. When the camp is disbanded as the tide of war starts to turn against the Japanese, it is almost difficult for Jim to leave it behind. But in the final days of the war both the Japanese and the internees, as if by mutual consent, begin to abandon each other in order to try to survive the looming power shift. The internees once again start to circle Shanghai in search of safety, dodging American air raids, desperate Japanese soldiers, and the warring factions of the Chinese “puppet armies” that spring up in the temporary power vacuum. As Jim leaves camp, he carries with him a small wooden box containing his possessions, including the small newspaper photograph.

Now that he was about to see his real mother and father he had thought of tearing up the picture of the unknown couple outside Buckingham Palace, his surrogate parents for so many years.

At first he doesn’t destroy the photograph. But eventually:

…he had carried the wooden box all the way from Lunghua, holding tight to the few possessions that he had assembled with such effort. He had been trying to keep the war alive, and with it the security he had known in the camp. Now it was time to rid himself of Lunghua and face up squarely to the present, however uncertain, the one rule that had sustained him through the years of the war.

Jim pushed his case onto the greasy surface. In the last moments of the dusk the dead water came alive with roses of iridescent color. As the box floated away, like the coffin of a Chinese child, the circles of oil raced to embrace it and sent tremors of light across the river.

In Ballard’s universe, society seeks its equilibrium in a hierarchy, not in equality, and violence is the handmaiden of power. Ergo, violence is an inevitable and natural aspect of human character. In Sebald’s world (at least in his works of prose fiction), violence only appears obliquely, although its traces are literally everywhere. Sebald generally makes little distinction between human violence and the violent power of nature. His melancholy, it seems to me, arises from the realization that human and natural violence is, to put it simply, the only landscape we have been given to wander in. Still, both Ballard and Sebald have narrators who, in their own way, are endlessly full of wonder about the world around them. Neither writer suggests that wonder (or any other human trait) might ultimately help us defeat our darker impulses, but wonder remains a redeeming value, and is perhaps the only trait that permits us to carry on with our lives with eyes wide open to the death and destruction that is our collective history and fate.

Like his fellow eyewitness, Ballard’s prose vividly invokes all of the senses (no wonder Steven Spielberg liked the book) and, like Sebald, he often moves rapidly between the micro and the macro. Look at what he achieves in the following three sentences, where Jim shifts from a small immediate observation of the dust on his legs to a sweeping vision of the surrounding landscape and then back to a more omniscient view of the original scene of himself and his ragged band of fellow prisoners, a view in which he now sees his situation as artificial and absurd.

By the late afternoon this layer of dust on Jim’s legs and arms began to glow with light. The sun fell toward the Shanghai hills, and the flooded paddy fields became a liquid chessboard of illuminated squares, a war table on which were placed crashed aircraft and abandoned tanks. Lit by the sunset, the prisoners stood on the embankment of the railway line that ran to the warehouses at Nantao, like a party of film extras under the studio spotlights.

One of the most historical moments of the war occurs almost unnoticed while Jim and one of his Japanese captors, sharing an awkward moment of quiet, witness the dawn of the nuclear age, the bombing of Nagasaki.

…a flash of light filled the stadium…as if an immense American bomb had exploded somewhere to the north of Shanghai. The sentry hesitated, looking over his shoulder as the light behind him grew more intense. It faded within a few seconds, but its pale sheen covered everything within the stadium: the looted furniture in the stands, the cars behind the goalposts, the prisoners on the grass. They were sitting on the floor of a furnace heated by a second sun.

Jim stared at his white hands and knees, and at the pinched face of the Japanese soldier, who seemed disconcerted by the light. Both of them were waiting for the rumble of sound that followed the bomb flashes, but an unbroken silence lay over the stadium and the surrounding land, losing heart for a few seconds. Jim smiled at the Japanese, wishing that he could tell him that the light was a premonition of his death, the sight of his small soul joining the larger soul of the dying world.