Posts from the ‘Olivier Rolin’ Category

The Subtle Genius of the Novel 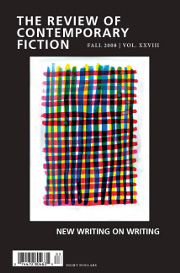 Fiction aspires to being the art of ambiguity.  Olivier Rolin

My favorite essay in Dalkey Archive’s recent anthology New Writing on Writing is Olivier Rolin’s The Subtle Genius of the Novel.  Rolin helps me think about how the books of W. G. Sebald operate on a political level.  Rolin’s theory of liberation politics (my term, not his) lies with the individual, not in the social realm.

The novel [is] a mental activity that is completely opposed to the political conception of the world.  The novel does not judge…

The novel is a means of emancipation, the means to a liberation of thought that we have more need of now than ever before.

The novel, the fictional point of view, consists of considering the individual in terms of how he escapes from the community, or at least affirms a singularity that separates him and makes him exist, precisely, as a character….This is obviously exactly the opposite of what was once called “committed literature”…

[The novel] doesn’t help us understand History through its alleged laws, [it lets us discover] great visions in the brief but memorable brilliance of a single image.

Sebald, it seems to me, was looking for ways to address the political without using the existing political conceptions of the world.  And so he reverted to the individual – the wandering narrator – and the ways in which the individual could approach history in distinctly different, highly personal, ways.

I highly recommend Rolin’s novel Hotel Crystal (the only one so far translated into English; available from Dalkey Archive).  Here’s how they describe this delightful read:

At some Parisian lost-and-found, a mysterious manuscript scribbled onto stray bits of hotel stationary and postcards and stuffed into an abandoned briefcase comes into the hands of an “editor,” who claims to faithfully transcribe and assemble the random texts. On the face of it, these consist of fastidious descriptions of a series of hotel rooms in cities around the globe, but their world-weary writer, a certain “Olivier Rolin,” is also involved in a number of highly improbable international networks, populated by unsavory thugs and Mata Haris in distress.

Author Olivier Rolin has dipped into his extensive travel notebooks to create this highly inventive novel that spoofs, among others, the decaying international espionage scene, the literary author publicity tour, and official French culture, all against a backdrop of the queasy alienation secreted by standard-issue hotel rooms across the globe.