Posts from the ‘Marianne Wiggins’ Category

Lost in the Shadows: Marianne Wiggins’ The Shadow Catcher 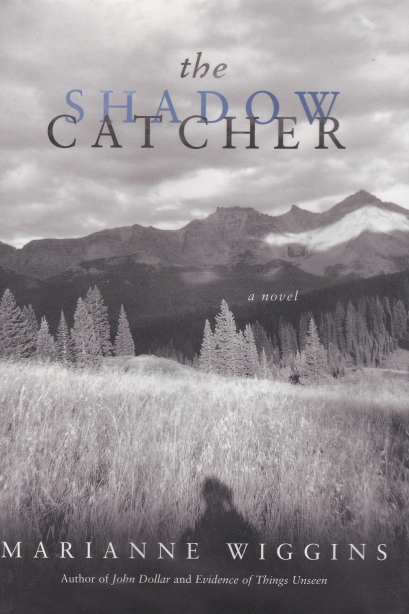 In the Acknowledgments for her new novel The Shadow Catcher, which embeds photographs throughout the text, Marianne Wiggins credits W.G. Sebald, “whose interleafing of photographs with prose opened my eyes to the possibility of a new way of reading.” As a result, many reviewers have been comparing her book with those by Sebald. So naturally, I was anxious to get a first edition (with a beautiful cover photograph by Wiggins’ daughter Lara Porzak) and start reading.

The Shadow Catcher is a twin narrative. One thread follows a few days in the life of a Southern California writer named “Marianne Wiggins.” The alternating thread consists of a work of fiction she has written (a novella really) about the famous photographer of Native Americans Edward Curtis and the woman who became his wife, Clara (whose last name – Phillips – never seems to be used in the book).

In the opening pages, Wiggins signals that she wants us to think this is serious stuff. Her narrator describes a sketch by Leonardo da Vinci she has seen in London that depicts a tiny Mediterranean coastal town from an aerial view. This propels the narrator off on a Whitmanesque flight of fancy back across the Atlantic Ocean, across Greenland, across the full breadth of “my country,” to the narrator’s home in Southern California. During this imaginary trip, the narrator seeks to find “the sound my country makes” (Wiggin’s italics). After rejecting various “sounds” that represent religion, slavery, money, etc., the narrator finally determines the sound that she hears:

I hear a single note, heralding arrival. The sound of a train whistle. The sound my country makes. And I feel safe.

It’s an ambitious opening, this poetic, circuitous flight from the Old World to the New, packed into a brief, five-page prelude. Then, “Marianne Wiggins” begins her half of the narrative in earnest. She’s stuck in a classic LA traffic jam en route from one hip restaurant to another where people from a movie production company await her. She’s going to make a pitch for her book about Curtis. Suddenly our Whitmanesque narrator turns into a cliché. Here she describes herself arriving late to the restaurant to do her movie deal:

…my hair all EINSTEINED, giving off its own exhaust, mascara/lipstick smeared and bargain Nordstrom Rack linen/rayon MADE IN INDONESIA jacket rutched across my tits to encounter THEM: two women in Armani, militantly trimmed and toned.

Following a mysterious phone call, “Marianne Wiggins” next heads off on a late-night drive to Las Vegas to investigate a man dying in a hospital who name is “John Wiggins” and who might or might not be her father. En route, she meditates on the blighted history of the American West, the pseudo-West that remains, and on her own family history. Arriving at the hospital, she encounters an elderly Navajo man, “Mr. Shadow,” who had accompanied John Wiggins to the emergency room after his “cardiac event.” Lester Owns His Shadow explains that John Wiggins was attempting to sell him two museum-quality Native American pieces when he collapsed. As coincidence would have it (and this book is chock full of coincidences), he recognized one of the pieces, a rare bracelet his father had once crafted as a very special gift for – well, for Edward Curtis. Lester Owns His Shadow’s father had served as translator for Edward Curtis, the Shadow Catcher. “Are you messing with me, Lester?” “Marianne” asks.

Well, no, Mr. Shadow is not messing with “Marianne Wiggins”, but Marianne Wiggins is definitely messing with us. By the end of the book we are knee-deep in implausibilities and cute, symbolic coincidences. When the two narratives finally intersect and we are given a kind of resolution, one of the key characters turns out to be a man named Curtis Edwards. Honest. But for me, the biggest implausibility was “Marianne Wiggins” herself, a character I really liked about half the time, when she was wise, intelligent, funny, and prone to ponder big, important topics. But she could turn on a dime and be preachy (“Sometimes we get the heroes we deserve but we always get the television shows our fears dictate”) or, worse, full of bad self-help advice (“Ask yourself what you believe in, and you’ll find out who you are”).And don’t forget her cameo as a frantic wannabe script writer. As they use to say on I’ve Got a Secret, will the real “Marianne Wiggins” please stand up?

But wait. We need to backtrack and catch up with the other narrative in The Shadow Catcher.I began the “Edward and Clara” sections with some trepidation. The lives of artists are almost always reduced by novelists to embarrassing clichés, and the life of Edward Curtis is a recipe for fictional disaster. While his photographs are immensely popular and reproductions of them are ubiquitous, he’s often disdained for his romanticized and highly inaccurate depictions of Native Americans.He’s also known for overpowering ambition and other all-American traits of the male persuasion. True to form, Wiggins’ Edward Curtis proves to be a cardboard character full of attributes but no real depth.Fortunately for me, however, Clara is the focus of the “Edward and Clara” sections, because she is the most imagined and genuine character in The Shadow Catcher.

Edward and Clara’s families grew up as neighbors in St. Paul, Minnesota. Convoluted circumstances led the remnants of both families to resettle in the Seattle-Tacoma area, where Edward and Clara became reacquainted. The “Edward and Clara” sections are written from Clara’s point of view, and we quickly come to see that Edward is cold, self-centered, ungrateful, untutored, ambitious – and he’s definitely not the type of man that passionate, resourceful, educated Clara wanted to marry. Nevertheless, Wiggins makes Clara overlook all of Edward’s clearly visible flaws to marry him, foreshadowing the disastrous consequences that would soon follow.

Wiggins’ novella about Edward and Clara is curiously abbreviated. Even though their story occupies more than 140 pages, less than twenty are devoted to their lives after marriage, to Edward’s photographic career, and the events that led to Clara’s subsequent suicide.Wiggins instead focuses on their childhoods in Minnesota, Clara’s exotic and eye-opening train trip to the west coast, and her first few months homesteading in the woods outside Tacoma. This is Wiggins writing at her best. She has a great compact narrative style and terrific descriptive powers that prove far more evocative than the photographs scattered throughout the book.But the focus on Clara and the devastating portrait of Edward that emerges really begs the question of how the “Edward and Clara” half of the book connects with the “Marianne Wiggins” half.Sure there are some plot twists and family discoveries that technically connect the two halves, but just as Clara overlooked Edward’s character flaws, “Marianne” ignores the damaged legacy and reputation of his life and photographs and somehow turns him into a kind of spiritual touchstone. In the “Marianne Wiggins” part of the novel, where just about every key character is seeking or obsessing on their father, Edward, the terrible father, is a hero, while Clara barely warrants a mention.

Many readers, I’m sure, won’t care about these failings. The Shadow Catcher is a pleasant, occasionally rewarding, work of fiction that can be enjoyed for the quirky stories that it tells. But as a novel, as an attempt to completely and utterly convince us of the author’s compelling vision, it is marred by her frustrating inability to make the book cohere. Wiggins can’t make the two narrative halves add up to a whole. The unexpected and implausible deus ex machina that she concocts to tie up all the loose ends is just too tidy by half.

Wiggins can be a very uneven writer. In The Shadow Catcher, she has an annoying tendency to overwrite, using CAPITAL LETTERS or italics to really make sure the reader gets what she means. And, surprisingly, she has a tin ear for conversation, which I found off-putting. People say things like “golly” and “alrighty” to “Marianne Wiggins.” And even the historic characters don’t sound any more authentic. On hearing that the Curtis family has moved to Seattle, Clara’s mother is painfully made to say:

I’m certain that it’s very civilized…We hear they have the telephone. Very modern. And there’s a credible college there. With full female enrollment. Universal suffrage.

As for her use of photographs and other images, I have to admit I could scarcely remember them after I finished the book, even though there are thirty-four according to Wiggins’ Notes on the Images. As expected, the majority of the photographs were by Curtis, but there were also a few documents from Wiggins’ family history, along with several postage stamp-sized reproductions of art by Giotto and Pieter Brueghel. For the most part, the images were employed unimaginatively in service to the text.

However, the most Sebaldian images in The Shadow Catcher were four “found” photographs: a cabinet card portrait of a woman, a snapshot of a man in a chair, a lake view, and a vintage image of a train stopped at a station. Unlike the Curtis images these four photographs carry on a kind of dialogue with the text. They manage to bring their own irreducible poetry or complexity to the page. I found myself especially drawn to the the two outdoor amateur photographs, which have a curious and very magnetic emptiness at their center. They each have great pictorial presence and it’s no wonder someone was attracted to them and saved them purely for their image power. Look at the photograph on page 173, with its killer lesson in linear perspective and the faint hint of a mountain right at the vanishing point. Then look at the amateur snapshot on page 267, which simply, almost pointlessly, shows a lake and – by mistake? – the prow of a small boat jutting into the lower corner of the picture. Even though the placement of this photograph in the text is perhaps too literal (it is embedded at the point when we learn that Clara has committed suicide by jumping out of a rowboat in the middle of Puget Sound), nevertheless it perfectly evokes the yearning for peace that Clara could not find in later life as well as the emptiness she sought by jumping.

My point is that highly detailed and dramatic photographs like those by Curtis have too much weight and specificity to be good partners with prose fiction. They drive the imagination away. As a writer, Wiggins seems to understand this clearly. She never makes a textual portrait of her characters. For example, take Lester Owns His Shadow, about whom we learn only that he has calloused hands and a single silver braid. Likewise, she introduces us to a military man called The Colonel not by by describing him – she only says he is “a fit tall man in his mid-forties” – but by describing the varied contents of his office. We don’t seem to need to know what a character looks like to grasp him or her in their entirety. Which is why the use of embedded Curtis photographs just left me cold. They’re all detail and no shadow.