Posts from the ‘Mark Dion’ Category

About two months ago I wrote about an exhibition I had seen at the Nelson-Atkins Museum in Kansas City called “The Magnificent Collection of Gilbert G. Hargrove” and its accompanying publication The Hargrove Family History.  The objects in display in that exhibition were (for the most part) truly from the museum’s collection, but the collectors were fake.  The “Hargrove family” had been created out of thin air by the curators.  Now, Mark Dion, an artist I admire and whose work I have written about before, has created a similar installation at the Minneapolis Institute of Arts called “The Curator’s Room.”   There is a description of Dion’s project on the MIA website (you’ll have to scroll down a bit to find his name), but there is an excellent review with photographs at the ArtNews website.  For Minneapolis, Dion has created a fictitious curator whose perfectly preserved office was uncovered during a renovation.

Dion’s art usually investigates the meaning of museums, often turning the museum itself into the subject of his exhibitions.  Clearly some of the fun of Dion’s installation (which I have not seen in person) is the way in which it also becomes a period room, a simulacrum that shows how a room’s furnishings reflects a specific moment in time.  “The Curator’s Office” offers a look back at a time when the museum profession was very different indeed, when original objects were often casually housed in offices, when cataloging records were on 3 x 5 index cards, and when the museum staff still smoked in their offices.

“The Curator’s Office” is part of an exhibition called “More Real: Art in the Age of Truthiness,” which is on view through June 9, 2013. 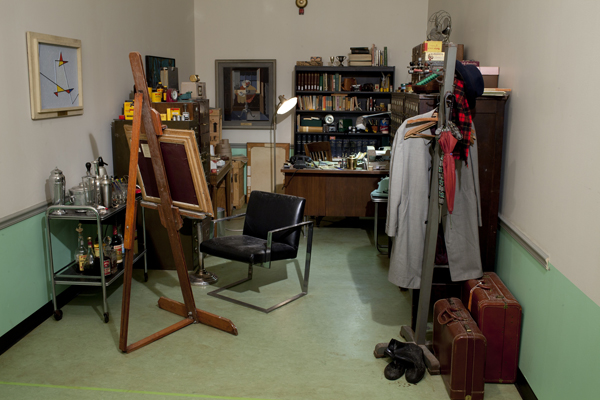 If a Tree Falls in a Forest…

In Campo Santo, W.G. Sebald writes about a hike he made – a sort of pilgrimmage, really – in Corsica, the site of some of the last great forests in Europe.  Although the truly ancient forests were already gone, Sebald quoted witnesses and momentarily imagined that the forests had never been cut down.

The English landscape painter and writer Edward Lear, who traveled in Corsica in the summer of 1876, wrote of the immense forests that then rose high from the blue twilight of the Solenzara valley and clambered up the steepest slopes, all the way to the vertical cliffs and precipices with their overhangs, cornices, and upper terraces where smaller groups of trees stood like plumes on a helmet.  On the more level surfaces at the head of the pass, the soft ground on which you walked was densely overgrown with all kinds of different bushes and herbs, Arbutus grew here, a great many ferns, heathers and juniper bushes, grasses, asphodels, and dwarf clyclamen, and from all these low-growing plants rose the gray trunks of Laricio pines, their green parasols seeming to float free far, far above in the crystal-clear air.

By an odd coincidence, two recent museum visits led me to two very dissimilar artworks, both based on creating something new out of a large tree trunk.  At the Olympic Sculpture Park in Seattle, I visited Mark Dion’s Neukom Vivarium, 2006, a wonderful stand-alone greenhouse that holds a sixty-foot long section of a real Western hemlock that has been moved from the site where it fell in the Duwamish/Green River watershed.   This tree had fallen in 1996 and had become a nurse log, developing the unique ecosystem of plant and animal species that would help it eventually decompose.  For its new home in Seattle, Dion, an artist who has created many installations based on museums and natural history, has tried to recreate an environment nearly identical to the one where the tree originally lay.  The visitor experience, then, is to be able to “observe the teeming life forms that make the log their home” and to demonstrate “how difficult, indeed how futile, it is for humans to attempt to replicate what nature does by itself even in this age of high-tech science,” writes Lisa Graziose Corrin in the Field Guide to the Wildlife of Mark Dion’s Seattle Vivarium.  While the green house environment is exceptionally high-tech, Dion’s project is deliberately history bound.  The interior of the building is decorated in blue Delft-like tiles (too green in my photograph) that illustrate the insects, plants, and animals found in the tree’s ecosystem.  Furthermore, the artist has stipulated that the greenhouse cannot open without the human presence of one of the trained docents who serve as “park rangers.”  Here’s Dion talking about his piece.

More recently, I have made several visits to the new Modern Wing at the Art Institute of Chicago where one gallery is dedicated to a single artwork – a large log.  Charles Ray’s 2007 sculpture Hinoki is an elaborate replica made of wood by Japanese craftsmen who copied a fallen tree trunk that Ray found in California.  Here is Ray’s explanation of the piece, from the Art Institute website:

Ten years ago, while driving up the central coast of California, I spotted a fallen tree in a meadow just off the highway. I was instantly drawn to it. It was not only a beautiful log, but to my eyes, it was perfectly embedded in the meadow where it had fallen decades earlier. Pressure from the weather, insects, ultraviolet radiation, and gravity were evident. Total collapse appeared to be no more than a handful of years away. I was inspired to make a sculpture and studied many other logs, but I realized that I was only interested in this particular one.

At one point, I determined that its armature could be its pneuma, the Greek word for breath, wind, or life. Later, I considered making an inflatable sculpture but realized that the tailoring of the form would bring an unwanted complexity to the surface. It then struck me that the breath or life of the sculpture could be manifested in the very act of sculpting. Making a wood carving of the log by starting from the inside and working my way out would bring a trajectory of life and intentionality to this great fallen tree. With several friends, I transported the tree, cut apart by a chainsaw, back to my Los Angeles studio. Silicone molds were taken and a fiberglass version of the log was reconstructed. This was sent to Osaka, Japan, where master woodworker Yuboku Mukoyoshi and his apprentices carved my vision into reality using Japanese cypress (hinoki). I was drawn to the woodworkers because of their tradition of copying work that is beyond restoration. In Japan, when an old temple or Buddha can no longer be maintained, it is remade. I visited Japan often and had a difficult time bringing this work to completion and allowing it to go out into the world. When I asked Mr. Mukoyoshi about the wood and how it would behave over time, he told me that the wood would be fine for 400 years and then it would go into a crisis; after two hundred years of splitting and cracking, it would go into slow decline for another 400 years. I realized then that the wood, like the original log, had a life of its own, and I was finally able to let my project go and hopefully breathe life into the world that surrounds it.

Hinoki, it seems, could almost have been created as a direct challenge the idea articulated above by Corrin about the futility “for humans to attempt to replicate what nature does by itself.”  (See Hinoki arrive at the Art Institute and get installed on the second floor.)  It’s a tour-de-force act of mimicry that ends up existing (like so much of Ray’s work) more on the cerebral level than the sensual.

As I walked around and around Hinoki last week, I found myself remembering Mark Dion’s piece and playing a little parlor game: Which artwork is more in the spirit of W.G. Sebald?  My initial inclination was that Dion’s piece, with its loving references to old natural history museums and its devotion to the everchanging cycle of  nature, was clearly the Sebaldian artwork of the two.  But then I was reminded of Sebald’s fascination with the obsessive skill of silk weavers and other artisans and of the interest he showed in The Rings of Saturn for a character he calls Thomas Abrams, who spent decades painstakingly creating an exact scale model of the Temple of Jerusalem.  So in the end, my parlor game came to a draw.  Both works led me think anew about Sebald’s beliefs in nature and in the man-made.