Posts from the ‘Carmen Boullosa’ Category

The Scattered Shrapnel of the Unknown: Carmen Boullosa’s “Before”

But I’ll start at the beginning. Sure, I was like those children, I was one of those awkward children, and here I am cut off from their world forever. Children! I was like you once!

Carmen Boullosa’s narrator is reliving and re-exploring memories of her childhood. It’s a childhood like many – full of blissful moments, mysteries, embarrassments, misunderstandings, intense fear. This is a common – if not cliched – theme in countless novels, but the return to childhood that Carmen Boullosa has given us feels unlike any other book that I have read. I can’t say enough about Boullosa’s incandescent writing, which glows from within, radiating possibilities, contradictions, ambiguities.

In Before, it is we, the readers, who are made up, invented:

When I decided to tell you this, to invent you in order to tell this, and by having an interlocutor to have words myself, I didn’t imagine the bliss my memories would bring. Though I can exaggerate slightly my epiphany, I might say I’ve come alive again.

And what’s real are the memories:

They all rush up, want my hand, as if they were children, shouting “me first,” and I don’t know which to take first, for fear that one will rush out, decide not to come back in a fit of pique.

As memory after memory pushes itself to the surface in Before, several mysteries emerge. Why does the narrator refuse to recognize the woman she calls “Esther” as her mother – or to call her “mom”? What is the meaning of the footsteps and other frightening noises that the narrator hears with great frequency? One of the most remarkable aspects of Before is that the narrator really doesn’t want a full explanation to any of the various mysteries that haunted her childhood.

By night I couldn’t invent a code to group the terrifying sounds, but I was collecting them, creating a dictionary without definitions, an auditory lexicon. There surely must be an appropriate term to call what I created out of the noises pursuing me in the night. But I didn’t explain them: I never said, “That’s the wardrobe door creaking,” among other things, because I was also afraid of the right door to the wardrobe just because I was – because it was there, because it was by my right leg and I felt was about to explode, scattering shrapnel of the unknown…I didn’t put defining labels on the noises I could list because definitions wouldn’t have helped at all, wouldn’t have soothed or calmed me, would have only brought ingredients to swell the vein of fear. I would have been much more alarmed to know from where they came and how they developed!

Boullosa is reminding us that the richness and fullness of life is complex beyond belief. With every paragraph new options open up and existence becomes a path that turns into infinite possibilities. “If I were to try to endow my story with any kind of logic,” she writes, but logic doesn’t apply here.

[Spoiler alert.] In the very last sentence of the book the narrator apparently tells us that she died as a child and that her death occurred simultaneously with the appearance of her first menstrual period. The moment of her death occurs during a night of extreme panic, when she is being harassed by invisible pursuers  (“I could hear them breathing next to me.”), when she finds a beating heart in her garden, when her legs become drenched in blood. Did she really die or was this the death of her childhood innocence? Is she a ghost, talking to her imaginary audience from the grave? Perhaps. Either way, this death closes the circle. Throughout Before we learn absolutely nothing about the after – if there was one.

Before contains a single embedded photograph. It depicts Montmorency Falls, just outside Quebec City. (In the book, it is spelled as Montmerency.) The narrator has gone there on a summer exchange program and one day she is having lunch at the house of friends of her mother when “the steps and the noises I know so well” appear, scaring her so that she cannot finish her meal.

The whole wide world seemed to collapse like the extraordinary waterfall we passed in order to reach their house, the Montmerency Falls, that I remember from the mute, single piece of evidence I preserved by mistake from the world I inhabited as a child. 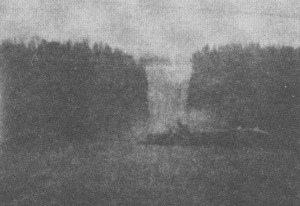 Curiously, the narrator goes on to say that that she “held [this photograph] the night they came for me and didn’t let it go.” Even though there is no reference to this on the final pages when “they” come for her, it is obvious that this photograph, which she ripped from her holiday scrapbook, held great importance for her.

Here it is. It’s the only thing I knew I had: nothing at all, a spurt of water in the darkness that by trying to remember so hard I’ve erased completely, I don’t know what colors were there, it’s black and white like the photograph you can see. I don’t know what it smelled of, what the temperature was, if there was noise or silence. Nothing at all. Water, sky, trees, electricity or telephone cables – perhaps carrying voices that I sense and try to recreate – murky constructions, all wrapped in the same senselessness: What was the water like? Was it a violent, extraordinary descent, pure death, or was it like lake water, quiet, peaceful, serene, like a tender mother, but gentler, more welcoming, no doubt more faithful, more protective?

And what were the trees like? Gently surrounded by leaves, cruelly protruding, sharp-pointed, rough bare branches, or dead on their feet?

The sounds, the smells, the colors, the emotions that she cannot remember about Montmerency Falls, are all things that she recalls in great detail with every other memory in the book. What does this mean? I would argue that it does not mean anything as trite as stating that photographs replace and destroy the associated memory. I believe we must go back to the image of the world seeming “to collapse” as the waterfall crashes down. Just how does a waterfall collapse? I imagine tons of water falling over the edge of the waterfall every second and literally disappearing into the relatively calm body of water below, which makes it seem that the waterfall is, indeed, collapsing into nothingness. Just as life collapses into death.

Carmen Boullosa’s Before is a book that becomes richer, more nuanced, and more rewarding with each re-reading. It been translated from the 1989 Spanish original by Peter Bush and comes with an excellent introduction by Phillip Lopate. It was published this month by the non-profit Deep Vellum Publishing, one of the best publishers of translated literature.