A River in Hungary 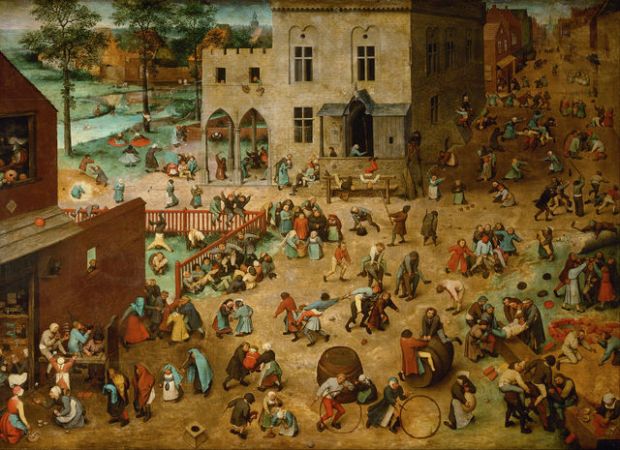 Summer means beaches, beer, flirtations, rowdiness. For people in northern climates, the brevity of summer puts people who are in a rush to celebrate on a collision course with nature—with sand, water, heat, bugs, snakes, sudden storms. Written five years earlier than River (which I wrote about in two recent posts), Esther Kinsky’s novel Summer Resort is a condensed story of one very hot summer at an üdülő, or a resort, on an unnamed river in Hungary.  The book, which has no real main character, is reminiscent of paintings by Pieter Bruegel the Elder, providing a macro view of the village, as if seen from a drone drifting overhead, replete with brief stories that convey the joys and irritations that comprise daily life.

Late in the evening two vehicles crashed at the corner of Main Road and Garageland Lane, a bright blue car and an egg-yolk yellow one, both made of soft pliant metal, the moon was high above the river and was orange, almost golden indeed and shone on the crushed and shifted metal, on the shards and splinters, on the now ruined lustre of journeys begun, on the pale faces of the injured, on whose temples the smile of departure still crouched in shock, it shone on the curiosity-crooked faces of the onlookers, on the last pale pink blooming hollyhock bell on a brown dried-up stand beside the Hotel Oasis where no one looked. So the day came to an end once and for all, and Katica stood on the cracked cement at the edge of the filling station, exactly at the point where the petrol station light and flashing blue light met, one shoulder raised, the other dragged down by her window cleaner’s bag, there she stood, profoundly exhausted by bearing witness to the evening.

The world that Kinsky gives us in Summer Resort is stylized, as if it were a world in miniature, housed in a terrarium. Some of the people that live in or are drawn to the üdülő have cartoony names, like the Kozak Boys, the Onion Men, Microphone Man, Ruthwoman (whose real name is Éva), and a group known as the Englishmen, who drown in “the sea of alien incomprehensible, unknowable words.” And then there is the New Woman, another foreigner, who steals Antal from his wife, an act that ends in tragedy. The village where everything takes place is decaying, its former economy shuttered. Its glorious past, when the sugar beet factory was still in operation, is described as:

the great toytime, when a key, which looked almost like a small heart with two holes in it, wound up the world on both sides of the river, so that the route from the earth-brown beet to the white bag of sugar was smooth and flawless, lined by horses, trams, waving fisherman, aproned cleaners with rattling pails, workers with bulging muscles under their blue jackets, with moustaches and laughing mouths, and smoke billowing white from the chimney.

But all this is gone now. Instead the village is full of weeds and decaying buildings. There are wild dogs on the loose and perhaps a few too many bars. “Nothing was as it used to be, they said.”

Summer Resort is a lyrical book filled with startlingly fresh imagery. The focus is as much on nature as on the cast of characters that populate the üdülő during the summer. In these respects it foreshadows what Kinsky will do in River, although it’s a much less solemn book, as is hinted at by her choice of an epigraph: “You should’ve wrote a book.” This comes from the title of a song by Dan Reeder, an American-born singer-songwriter and painter who has lived in Germany for decades and whose songs are often irreverent and humorous. But if pressed to say what the book is about, I would say that it’s about words and writing, which is perhaps not surprising, given that Kinsky has published several volumes of poetry and is a long-time translator. While the New Woman often feels that she has “gone astray in the inhospitable language of these parts,” Kinsky adores playing with language, as she does here, when she describes the arrival of a swimmingpull at the house of one of her characters, using a crazy quilt of a sentence that keeps switching vantage points and time:

The swimmingpull arrived, glowing blue, a large round basin that had nothing to do with dust and rust and ashes, a gaudy interloper between the crooked fences of the back yards, and the truck drivers who drove past on the main road stared and spat out of the window when they saw Ruthwoman who, eyes shut, drifted across the calm surface of the water on a brightly coloured airbed.

Summer Resort, published in English in 2011 by the wonderful Seagull Books, was translated from the German original Sommerfrische (2009) by Martin Chalmers. Chalmers and Kinsky were married in 2014, only months before he died of cancer. 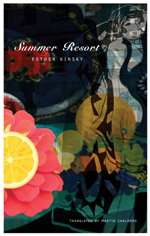